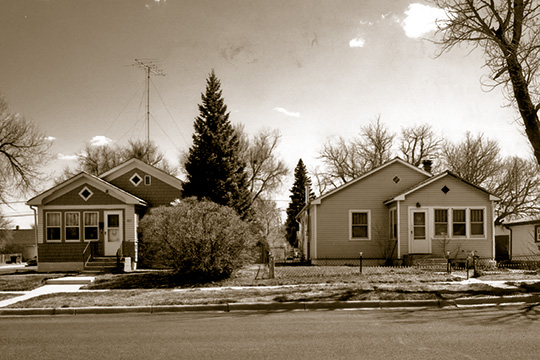 The Cheyenne South Side Historic District was listed on the National Register of Historic Places in 2006. Portions of the content of the web page were adapted from a copy of the original nomination document. [‡]

The Cheyenne South Side Historic District is adjacent to the Union Pacific Railroad freight yards on the south and is physically separated by the tracks from Cheyenne's original commercial district and residential neighborhoods. The City of Cheyenne was a railroad town created by the building of the first transcontinental railroad by the Union Pacific Railway, which laid tracks through the region in 1867, so that the original focus of the town was the rail yards and depot. The city generally grew outward from the railroad tracks, which are oriented at about sixty-five degrees, or west-southwest by east-northeast. The residential district is unique in that it represents a "working class" neighborhood, originally dependent on the railroad for employment and physically separated from the remainder of the City of Cheyenne by the intervening multiple tracks and freight yards. Pedestrian and vehicular crossings were limited, so the South Side developed its own commercial district, churches, a rich ethnic cultural mix, and an independent spirit unlike any other residential neighborhood in Cheyenne.

The historic district, residential in nature, contains a grid of paved streets oriented parallel to the railroad tracks. It contains thirty-one full blocks and eight half blocks of the Original Town plat. The district is roughly rectangular in shape and generally lies between East Fifth Street on the south and East Tenth Street on the north (the northernmost street paralleling the railroad yards on the south), and includes East Sixth, Seventh, Eighth and Ninth Streets. The west boundary is Warren Avenue, and the east boundary is Russell Avenue. House, Evans, Van Lennen, Maxwell, Seymour, and Pebrican Avenues lie in between. Three blocks and seven half blocks have been eliminated along the north, east, and south perimeters in order to represent the best concentration of a contiguous neighborhood retaining physical integrity within the Cheyenne South Side community.

Typical residential lots in the Cheyenne South Side Historic District measure 65 feet wide by 130 feet deep. Concrete sidewalks are laid along the streets in the district with east-west gravel alleyways dividing the blocks in half. In 1920, S.R. DeBoer, City Planner, designed a tree planting system for the City, including the South Side, suggesting a variety of different trees to prevent disease, and spacing distances along the streets. It is unknown if his program was fully carried out, but the South Side retains a variety of plantings that include cottonwoods, honey locusts, American elms, Bolleana poplars, ashes, sycamores, golden willows, soft maples, and evergreens that are relatively abundant as shade and ornamental trees on residential lots and along the street margins, adding to the historic character of the district. The district is characterized by small one-story wood frame dwellings dating from the late 1880s to the early 1950s, set regularly along streets. Some lots are shared by more than one home. There were several periods of intense building activity, but the most significant periods are 1923-1924, when several blocks between East Tenth and East Twelfth Streets along the northern perimeter were eliminated for railroad freight yard expansion. Many of these residences were moved and relocated throughout the South Side south of the expansion. Unfortunately, no records have been located that specifically document the process. Therefore, it is unknown which extant residences were moved from another location. Also, numerous new residences were built during the same time period for families whose residences were razed. The second period of accelerated building activity occurred during World War II, when a major oil refinery was built on the South Side, necessitating nearby worker housing. Many of these homes were built as temporary dwellings but have survived into the present.