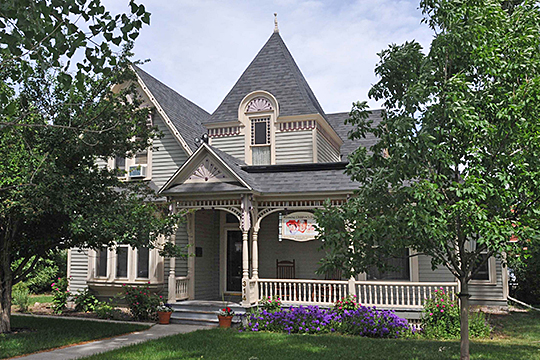 Born in 1867 in the path of the transcontinental Union Pacific Railroad, Cheyenne soon laid claim to a higher status than older Wyoming settlements such as those at Fort Laramie, Fort Bridger, and the mining town of South Pass City. The reason for the growing importance of Cheyenne at that time was that the city had, in the transportation and supply industries, a solid economic base. A major military post nearby, Fort D. A. Russell (today Francis E. Warren Air Force Base), and the cattle industry of the surrounding area were two other factors which helped to provide a sound basis for economic growth. In 1867 Cheyenne was the county seat of Laramie County, Dakota Territory and was growing rapidly, although two years later Laramie County was still not yet the most populous area of the state. The Organic Act of Wyoming which established Wyoming Territory on July 25, 1868, required a census to be taken for the purpose of apportionment. The apportionment was necessary for an election, in September of that year, of officials who were to organize territorial government the following spring. In that census it was found Laramie County contained 2,665 people, and Carter County (Western Wyoming) including an unorganized part of the territory contained 2,862 people.

Nevertheless, Laramie County was given four representatives while the more populous entity received three. Including those from the rest of the state, a total of 13 representatives met in the House of Representatives in that first year of territorial government. In the other legislative branch, the Council (Senate), there were nine members, three from each of the areas of Laramie County, Albany and Carbon Counties combined, and Carter County and the unorganized area.

John A. Campbell, the first governor of Wyoming Territory, chose Cheyenne as the site of the temporary capital. From 1869, the year in which the first territorial legislature met, until 1886, their biennial meetings were held at various Cheyenne locations including the Laramie County Courthouse. At the first session the two branches of the legislature even met in separate locations in the city, two rooms having been rented on Sixteenth and Seventeenth Streets. It was not until the late 1880's, the last years of the territorial period of Wyoming history, that a permanent structure was built for use by the territorial government.