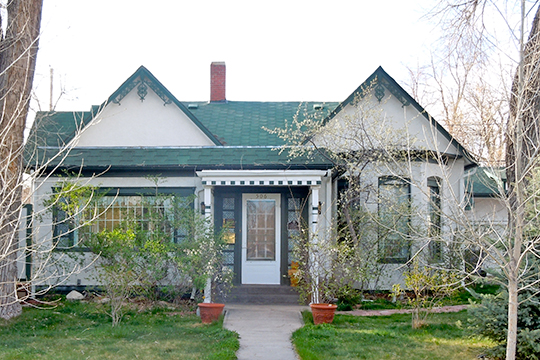 The Moreton Frewen House (506 East 23rd Street, also known as the Everett V. Hall Home) was listed on the National Register of Historic Places in 1975. Portions of the content of this web page were adapted from a copy of the original nomination document. [‡]

The original Moreton Frewen House (located in the Lakeview Historic District) was a small, one storied affair built of bricks to a thickness exceeding one foot in outside walls. The overall dimensions, including a full front porch extending a short distance down each side, were approximately 55' x 36'. The house had two large bay windows on the front (south end) which gave light to the living room and the library; two more on the west side opened on the living room and dining room respectively. A central hall led off the front porch and extended to the kitchen, the last room at the rear. Off this hall on the west were two doors, the first entering into the living room the second into the dining room. On the east side of the hall the first entrance opened into the library and the second into the house's only bedroom; between the library and the bedroom, with a door opening into each, was the bathroom. Apparently all rooms were originally built to a 12 foot ceiling height.

Presently the Hall's home (Frewen House historically; Hall Home today) presents several alterations from the building's original appearance. The open porch is gone from the front, replaced by a multi-windowed sun porch which extends from the southwest corner to beyond the original front door. This sun porch encloses the former location of the west-most front bay window, that window and its bay having been removed and replaced by French doors. Formerly the kitchen stood alone at the back of the house, leaving an open space L on either side the widest one to the west. Now this west L has been filled by an added bedroom and bath complex in which the ceiling height is 10 feet. The ceiling has also been lowered to 10 feet in all the rest of the house except the hall, the living room and the dining room where the original 12 foot height is retained. Also, the library has now been converted to a third bedroom. The thick brick walls have been covered evidently about 1918 to 1920 by a coat of stucco resulting in an exceptionally warm, easily heated house; on the other hand the high ceilings and same thick wall insulation make for a cool house in the summertime.

A few other observations seem worthy of mention. When this house was built in the early 1880's it was beyond the street lines of the then quite small city in fact it was known as the "house by itself on a hill." Then, when 23rd Street was established and residences began to form a line slightly back from the curb, this house, standing so deep in its lot that its back rested tight against the alley, was out of line with all of the others. So it stands today, far back behind a lengthy sweep of lawn.

Within the house the dining room is probably the most arresting place. Mr. Frewen imported for this room a leatherette type wall paper in raised, attractive and intricate design. This was installed and then set off in panel pattern by broad, dark-red strips of wood. Thanks to loving care by Mr. and Mrs. Hall and perhaps by previous owners, this decorative finishing appears as fresh and perfect today as though the work was only just completed. There exists in this room a fireplace which uses a common chimney with one that faces into the living room. The latter is framed by carved woodwork as intricate in design and as fresh and perfect as is the 90 years old wallpaper in the dining room.

Mr. Hall, now retired, was for many years a teacher of manual arts, particularly woodwork, in the Cheyenne school system. No doubt that fact has more than a little to do with the beautiful state of preservation which so singularly marks this fine old home.

This house although soundly built, carefully kept and distinguished by age is not especially significant in its own right not for any singularity of architecture, exceptionalness of material nor peculiarity of historic episode. On the other hand, through its original owner and first tenant, Moreton Frewen, it stands a symbol of a connection once existing between two widely disparate historic movements. The first of these was a major era in the evolvement of modern Britain; the second merely a phase of transition on the fast moving American frontier, albeit one that has long held the interest of a wide and diversified audience.

The relevant British historic era concerned the decline of agriculture and rise of industry, commonly known as the Industrial Revolution; the American transition phase concerned the first stage of settlement on the western high plains, commonly known as the Cattleman's Frontier. Moreton Frewen, scion of country gentry dating from the Norman Conquest, was caught in the land-wealth crushing climax of the first and pushed himself too late into the frenzied speculative climax of the latter. He well might have been selected as the type specimen for unnumbered younger sons of European landed aristocracy who, finding their class losing a last desperate hold on the direction and the lion's share of national wealths, turned to other horizons. But these younger sons entered divers fields and matured in diversified forms, if Moreton Frewen was typical when standing on the threshold of his career that threshold was evidently as far into life as the type held true.

Even as late as the 1870's a country squire possessing ample holdings could provide more than a pittance for a younger son. Actually a settlement ample to provide a less extravagant man a handsome annual income was made on Moreton Frewen. But between his version of student life and the social whirl of a fox hunting and horse racing society (horses were terrifically expensive) young Mr. Frewen's capital was about exhausted by the time when (due, no doubt, more to intelligence than effort) he was granted a degree by Cambridge University. He had money sufficient to cover one more season of fox hunting, a sport at which he excelled, and one more colossal bet at the races, a bet not unexpectedly lost.