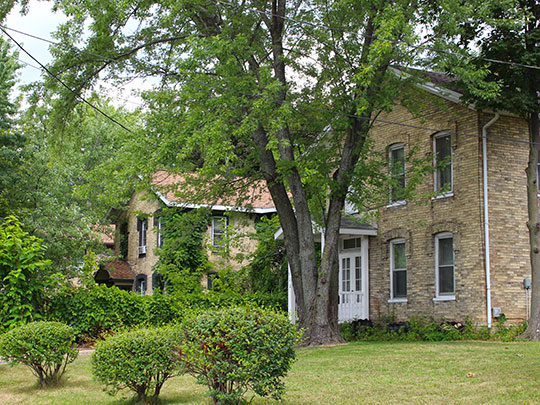 The Conrad Cottages Historic District was listed on the National Register of Historic Places in 1993. Portions of the content of this web page were adapted from a copy of the original nomination document. [‡]

In the winter of 1836-37, the territorial legislature established the Rock County seat at Janesville. This and the water power of the Rock River boosted Janesville's growth. The state legislature incorporated Janesville in 1853, at the beginning of what would be a boom decade in the growth of the city. The mills erected along the Rock River provided employment for city residents and a place for the pioneer farmers of the surrounding "Rock Prairie" to bring their grain and other produce to market. The farmers boosted retail trade in the city and many commercial blocks were erected during the 1850s as well.

After the Civil War, and on into the late nineteenth century, technology and road improvements in the city allowed for the development of the area east of Janesville's downtown into a prestigious neighborhood of large homes. Most of this prestigious neighborhood is included in the Courthouse Hill Historic District. The rest of the neighborhood, along with a large area of middle-class homes is located in the Prospect Hill Historic District.

The houses in the Conrad Cottages historic district were built during different periods of Janesville's history. The Hiram Taylor House (306 Milton Ave.) is the oldest, built for a pioneer-era attorney. Taylor was able to build at this location for two reasons. First, his large lot was just on the other side of the hill, making construction easier. Second, the site was located on a major road into Janesville, so Taylor did not have to wait for street construction in the area before he could build.

In the mid-nineteenth century, this part of Milton Avenue was on the rural outskirts of the city. Taylor owned about four acres of land, making his home a "country estate." Eventually, his lot was subdivided and included into Prospect's Addition, an east side plat. The house has retained its deep setback and wide sideyards that still suggest a rural setting.

The four Conrad Cottages were built in 1882, during a period in which rapid development of the area east of the Courthouse Hill neighborhood occurred. Tract development such as this were never popular in Janesville in the nineteenth and early twentieth centuries, and the Conrad Cottages Historic District is one of the rare examples of such a development in the city.

Other houses subsequently filled in the lots between the houses in this district, but they are either too remodeled or too new to be a part of the district. A modern fire station and apartment complex have been recent intrusions in the neighborhood.

The Conrad Cottages Historic District is architecturally significant both for the design of its individual buildings and because it contains four buildings that comprise a rare resource type in Janesville. Two of the houses in the district are good representative examples of the Greek Revival and Second Empire styles, and a third is a good example of a Gothic Revival style-influenced vernacular form house. The remaining four buildings are nearly identical Italianate Style influenced cream brick houses that were built in 1882 as rental housing. Nineteenth century "tract" development in Janesville, even on this small of a scale, is quite rare. The Conrad Cottages are significant as Janesville's most intact example of this type of development.

The Greek Revival style was the first national style commonly seen in Wisconsin; it was popular between 1830 and 1870. Greek Revival buildings are formal, orderly, and symmetrical. While Wisconsin has a number of elaborate Greek Revival houses, more commonly the style is seen on vernacular houses in the form of symmetrical massing, regular fenestration, simple cornices, and returned eaves, and entrances decorated with a transom and/or sidelights.

The Hiram Taylor house (306 Milton Ave.) is a fine example of a commonly seen Greek Revival house type in Wisconsin. It has a vernacular gabled ell form, and its details include returned eaves, six-over-six light windows, and a fine entrance with sidelights and an architrave trim. Even though the Taylor house is a simple one, it is still one of the most intact houses with Greek Revival details in a city whose Greek Revival-era houses have almost all been remodeled, and where the Italianate style is pervasive.

The Gothic Revival style was popular in Wisconsin between 1850 and 1880. Characteristics of the style are steeply-pitched roofs, pointed arch windows, pinnacles, finials, bargeboard, turrets, and label moldings. Gothic Revival houses are not overly common in the state, and the more elaborate examples are rare. The Meyher house (235 Milton Ave.), built in 1855, is a good example of a front gabled vernacular form house that expresses the Gothic Revival style primarily in its form and massing rather than elaborate details. The very steep gable roof, the tall first story multi-light windows, and the unusually thin label moldings combine to make this an interesting example of the style.

The Second Empire style was popular in Wisconsin between 1870 and 1880, although it was not as popular as the Italianate or Queen Anne styles. Second Empire buildings feature mansard roofs, often with projecting dormers, and elaborate details that are similar to Italianate style details.

The Jenkins house (327 Milton Ave.) is one of the few examples of the Second Empire style in Janesville, as the Italianate style maintained its hold on city buildings throughout the 1870s and 1880s. It is a small building, but it has all the hallmarks of the style, including the mansard roof with dormers, and Italianate style details. While not the most elaborate example of the style in Janesville, the Jenkins house has a high level of integrity, with most of its details intact. The Italianate style was very popular in Wisconsin between 1850 and 1880. Early Italianate houses generally have square plans, low-pitched hip roofs, wide eaves with brackets, tall windows with round arches or label moldings, and, often, a cupola. Later Italianate houses often were more rectangular than square in plan, and were taller with gable as well as hip roofs. Like other styles, the Italianate style in Wisconsin is seen on many buildings only in its form and massing or in its use of brackets or window moldings.

The Italianate style was the most popular nineteenth century style in Janesville, and its use continued well into the 1880s. The Conrad Cottages suggest the late Italianate style in their vertical form and massing and in the shape and decoration of their windows. The use of cream brick in these buildings is also typical of many of Janesville's Italianate houses.

The Conrad Cottages are more important as a type of development than as examples of architectural style. Despite having a strong commercial base, Janesville has always been known as an industrial city. From the mills of the nineteenth century to the giant auto assembly plant of the late twentieth century, Janesville historically has been a city of factory workers. None of these historic industries, however, were responsible for building tract housing or planned communities for their workers. Instead, local builders constructed a wide variety of vernacular houses that were occupied by working-class families. A large concentration of this type of housing is located in the Old Fourth Ward Historic District.