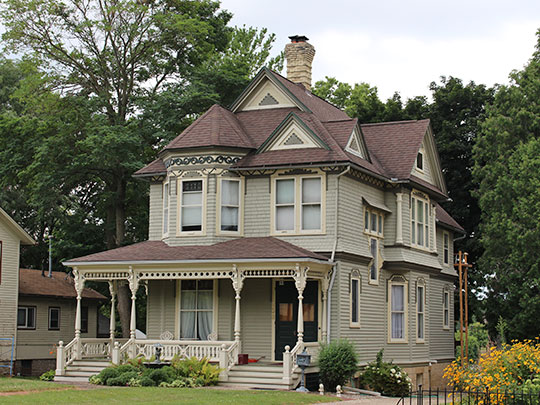 Toward the latter part of December 1835, after John Inman's party had commenced the first settlement in Rock County, Samuel St. John and family arrived. Mr. St. John was the first white man to bring his wife and children to the valley. Mr. St. John, assisted by Inman and his pioneer associates, erected a cabin on the east end of the flat, within a few rods of where the Emerald Grove Road branches from the Beloit Road. The next accessions to the small settlement were Dr. James Heath and wife. They arrived at the cabin of Samuel St. John on January 18, 1836, and were provided with accommodation therein. In February Henry F. Janes made his claim but soon went back for his family. Jane's log cabin became the headquarters of most of the new arrivals thereafter, and it soon became necessary to enlarge it by addition of two stories. Janes constructed a ferry-boat and established a ferry opposite his log cabin. The place became very popular and was patronized by almost everyone passing through the valley. A sale of Government Lands took place about this time. All the unclaimed parcels on the west side of the river were sold, and several sections on the east side as well. The quarter-section on which Jane's house stood, however, was overlooked in the sale. Here was an opportunity to establish a rival to those metropolitan villages, Rockport and Wisconsin City. Accordingly, in the spring of 1837, Mr. Janes surveyed and platted the land for the village which was to perpetuate his name. The western limit was formed by the east bank of the Rock River.