Photo: Home in the Benton Avenue Historic District, Janesville, WI. The Historic District was listed on the National Register of Historic Places in 1996. Photographed by user:Boscophotos, 2015, (own work) [cc-by-3.0 (creativecommons.org/licenses/by/3.0)], via Wikimedia Commons, accessed January, 2016. 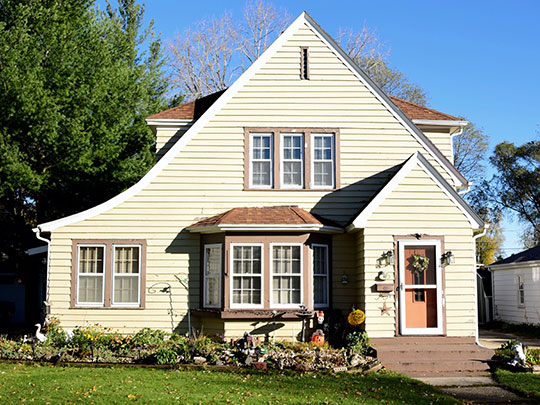 The Benton Avenue Historic District Was listed on the National Register of Historic Places in 1996. Portions of the content of this web page were adapted from a copy of the original nomination document. [‡]

As the new Samson Tractor plant was being erected, many of Janesville's leading citizens became concerned at the lack of affordable housing for the expected influx of new workers for this company. There were also concerns that outside speculators would flood into the city to build cheap housing for these workers. To that end, the Janesville Chamber of Commerce formed the Janesville Housing Corporation, an organization to raise funds for the construction of good quality, affordable housing in the city, specifically directed toward workers at the new Samson Tractor factory.

In early 1919, Janesville businessmen began selling $300,000 worth of stock in the Janesville Housing Corporation to local citizens. The money from the stock sales was used to purchase lots and to erect modestly-priced housing for workers, specifically those working at the Samson Tractor factory. The fund was given a significant boost when the General Motors Corporation purchased $100,000 worth of stock in March of 1919. After fund-raising began, the corporation began purchasing land and making plans to erect houses. In the summer of 1919, it was reported that the corporation was completing the work on 26 houses near the new factory and making plans for other houses in other parts of the city.

It was noted when the Janesville Housing Corporation was formed that one of its purposes was to try to keep outside speculators from coming into the city to build houses for workers. In this regard, General Motors, aside from giving money to the Housing Corporation, purchased land around the factory site to hold for worker housing built by a developer of their choosing. However, an outside developer did come into Janesville and constructed this district.

Responding to the same factors that brought about the formation of the Janesville Housing Corporation, a real estate development firm from Chicago, Matteson and Landstrom, purchased a portion of the Scofield Addition, a largely vacant piece of land in the northeast quadrant of Janesville, for the purpose of erecting 110 affordable houses. The firm had built similar developments in Flint, Michigan, another community with an industrial base related to the automotive industry.

Matteson and Landstrom moved quickly to complete their development. First, they replated their portion of the Scofield Addition into very small lots, then quickly began to erect the primarily Bungalow houses that make up this district. By the end of 1920, the firm had filled 79 of the 110 lots with houses, and within a couple of years more, had completed all 84 of the houses in this district.

While there is little doubt that Matteson and Landstrom built their housing development in hopes of attracting the workers in the new Samson Tractor factory, tax rolls and city directories indicate that their development was less than successful in attracting these workers. In fact, the development was less than successful altogether. Tax Rolls and City Directories show that the majority of people owning or occupying this development in the 1920s were not Samson tractor factory workers. Perhaps the development's location, which was quite a distance from the factory, or the efforts of the Janesville Housing Corporation, which was erecting houses as well, inhibited the success of the development.

By the late 1920s, a number of houses in the Matteson and Landstrom development were still unsold and being rented by the developer. Most of the other houses were in the hands of owners who also did not occupy them. By the mid-1930s, some of the houses were still in the hands of the developers, and most were still rentals. Many of the houses have remained rentals ever since they were built or have been converted to rentals in more recent years. City directories show a very high turnover in occupants in all of the houses throughout the twentieth century. And, while a number of occupants have been General Motors workers through the years, most occupants have had other sources of employment.

The Benton Avenue Historic District is architecturally significant at the local level because it contains a fine and dense concentration of variations of the Bungalow style. In fact, this district has more examples of the style than any other area of the city. The district is also locally significant as a pre-World War II housing development that has an appearance that is different than any other historic neighborhood in Janesville.

The Bungalow was popular in Wisconsin between 1910 and 1940. Offering economical home ownership for the middle and working classes, thousands of bungalows were built throughout the country. Bungalows are generally well-constructed houses built of high-quality materials. Generally of one to one-and-one-half stories in height, they feature wide, often sloping roofs, large porches, and simple Craftsman-like trim. Typical details are knee-brace brackets, exposed rafters and beams, and an abundance of simple wood trim. Most bungalows have clapboard siding, but many were constructed with full or partial brick walls. Many bungalows have a large brick chimney and fireplace. Bungalow interiors often feature Craftsman details like high quality woodwork and built-in wood cabinets and bookshelves.

The bungalows of the Benton Avenue Historic District are representative examples and have many of the distinctive characteristics described above. What is particularly significant is the large number of bungalows in this district, a concentration not found elsewhere in the city. And, while many bungalow neighborhoods in other cities feature streetscapes of identical houses, in this district, the houses are variations of a few basic forms, but are not all identical. While some identical houses were constructed right next to one another, different forms were scattered among each other along the district's streetscapes. The result is that this historic housing development is not as monotonous as it could be if all of the houses were identical or all of the houses in one particular group were built right next to each other. The narrow lots create a tightly clustered group of houses, a spatial quality not seen in other areas of the city.

The bungalows in the district reflect typical bungalow design of the period. For example, all of the bungalows in the "One-story Front-gabled Bungalow" category have a main front-facing gable with a lower front gable accenting the front facade, a detail that is typical of many bungalows. Many also have porches covering the main entrance, some with tapered posts and square piers, another common element of the bungalow style. Some of the houses are decorated with exposed beams or rafters and knee-brace brackets, common bungalow details. As the One-Story Front Gable Bungalow with the highest integrity in the group, the house at 821 Blaine Avenue is a fine example of the original appearance of this particular form. It also illustrates how even a simple one-story house, constructed as "affordable housing" for factory workers, could be a stylish and handsome home with a few details from the popular Craftsman style. Other Bungalows in this group have somewhat lesser integrity than this example, but they all have the same form and massing and one or more of the details from this example.

Another common form in the district is the "One-and-One-Half Story Front Gable Bungalow with Side Elevation Wall Dormers." This form is taller than most of the other bungalows in the district, but its low-pitched gable roof suggests a lower house. The house at 875 Sherman Avenue still has its original exterior features, including narrow clapboards and wood shingles, both materials that are common to bungalows. The exposed rafters and knee-brace brackets on this house are also typical bungalow details. The best feature of this house, though, is the extant original porch, with its strongly Craftsman posts, balustrade, and piers. Craftsman details are common features of bungalows. Other examples of this particular in the district have fewer extant details, but show many of the same features as the house at 875 Sherman Avenue.

One of the most common bungalow variations in the district is the "One-and-One-Half Story Bungalow with Hipped Roof and Front Dormer." As represented by 956 Benton Avenue, this variation has the long, low lines of the Bungalow, with the prominent front dormer and front porch that are common details. Most of the houses in this group have typical Bungalow porches with tapered posts or battered piers. As represented by 956 Benton Avenue, this Bungalow form is simple, yet has most of the basic elements of the style, executed on a small, practical house.

The above Bungalow variations are less commonly seen in Janesville, but the last Bungalow variation in this district is a house that is typical of Bungalows elsewhere in the city. It is the "One-and-one-half Story Side-gabled Bungalow." These one and one-half story Bungalows have long, sloping gable roofs that extend down to cover the porches as well. Dormers project from the front of the house. Most are decorated with exposed rafters and/or knee-brace brackets and have square bays like the example at 950 Benton Avenue. This house, with its extra half-story of space, is a popular and practical form that is repeated all over the city of Janesville.

Not only is this district significant for its concentration of bungalows, but it is also significant as one of the few pre-World War II tract housing developments in the city of Janesville. Janesville has always been a strongly industrial town, however, none of the city's historic industries built tract housing or planned communities for their workers. Instead, local builders constructed a wide variety of vernacular houses that were occupied by working-class families. A large concentration of this type of housing is located in the Old Fourth Ward Historic District (NRHP, 1991). One small exception is the small group of late nineteenth century working-class houses known as the Conrad Cottages. Consisting of four cream brick Italianate-influenced houses, the Conrad Cottages is an unusual development in Janesville.

In the pre-World War II era, only the development of the large Samson Tractor factory led to any planned housing attempts in Janesville. The formation of the Janesville Housing Corporation, described earlier in this section, was a milestone for the city. The involvement of the General Motors Corporation via their large purchase of stock made the housing corporation the most notable example of planned community development in the historic era of the city. And, while this topic has not been thoroughly researched, initial information indicates that the Janesville Housing Corporation primarily developed small tracts of housing in various parts of the city in a manner that was typical of previous residential development in Janesville. In any event, no other pre-World War II housing development in Janesville is like the Benton Avenue Historic District in either physical appearance or historical background, making this district unique in the community.