Photo: Home in the Columbus Circle Historic District, Janesville, WI. The Historic District was listed on the National Register of Historic Places in 1983. Photographed by user:Boscophotos, 2015, (own work) [cc-by-3.0 (creativecommons.org/licenses/by/3.0)], via Wikimedia Commons, accessed January, 2016. 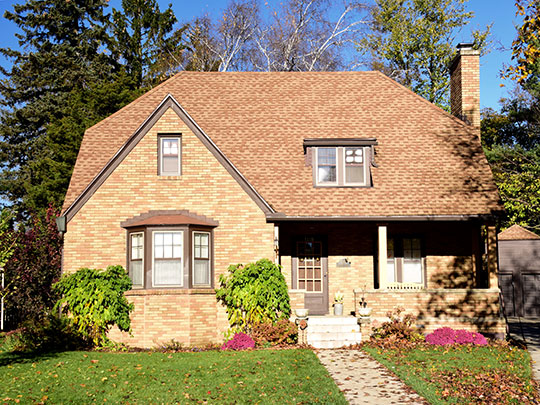 The Columbus Circle Historic District was listed on the National Register of Historic Places in 2005. Portions of the content of this web page were adapted from a copy of the original nomination document. [‡]

The Columbus Circle Historic District has a fine concentration of moderately-sized Period Revival houses that feature distinctive characteristics that set this neighborhood apart from other neighborhoods in Janesville. In fact, because this district has houses primarily built within a 10 year period, with similar characteristics and complementary period revival architectural styles, it holds together exceptionally well as a historic district. A single house at 500 N Garfield predates this development and is a contributing resource in the district. Few of the houses are individually significant, but together, they make up a cohesive whole, making this district a true representation of a historic district, a neighborhood in which the group of houses is much more significant than any of its parts.

Between 1900 and 1940, Janesville was transformed from a balanced community of commerce and industry to a community with a much more industrial profile. Commerce continued to be important in the community, along with professional services, but during the first several decades of the twentieth century, industry became the dominant economic force in the community. The industrial changes in the twentieth century also included a change from agribusiness to the production of consumer goods.

The industrial boom resulted in a housing boom in the 1910s and 1920s and much of this boom was on the east side of the community, north, south, and east of the Courthouse Hill Historic District. The residential boom included both houses for the generally well-paid factory workers of Janesville industries and the growing middle-class who were associated with the new industries in town, as well as people associated with expanded commercial businesses in the booming city. Despite the Great Depression, houses for both workers and the middle-class were also built during the 1930s as Janesville seemed to weather the Depression better than most communities, probably because the GM plant continued to operate and unionization gave workers better wages and more job stability.

One of the neighborhoods built during the growth period of the 1920s and into the Depression of the 1930s was this neighborhood, the Columbus Circle Historic District. The western edge of the district, part of the Garfield Addition, was platted in the late nineteenth century, but except for one house, was never developed. The industrial boom of the early twentieth century changed that, along with the development of the Parkwood Addition, the plat which encompasses much of this district. In fact, the Parkwood Addition can be directly attributed to the industrial growth of the city. The Parker Pen Company laid it out in 1916. It was an unusual addition in that the plat included a circular street with most of the building lots facing inward toward the circle. A few other plats of this era included curvilinear streets, but none had such a radical appearance.

Interestingly, the Parkwood Addition was not immediately built on, but by the mid-1920s, many of the lots had been sold and houses were being erected. In the nearby Garfield Addition, similar houses were being added along North Garfield Avenue. By the end of the 1920s, a majority of the lots in the Parkwood Addition and its neighbor were filled, but during the 1930s, a few more houses were added. These additions continued until 1943, when most of the lots of the district were filled. Building stopped until 1950, then a few ranch houses were added to fill up the remaining vacant lots of the district. However, formal development of the district ended in 1943, with the later houses merely infill construction.

The Columbus Circle Historic District is architecturally significant for its concentration of modest, but distinctive, period revival houses in a geographically-dense area that has a high level of historic character. The period revival houses, individually, are not as significant as they are as part of the group, making this a district not of fine individual elements or a district that shows a progression of architectural styles, but a district built within a brief period of time with houses that have complementary styles and a cohesiveness of size, scale, and quality of construction. Although there are some houses in the district that do not reflect a period revival style, the vast majority of the houses do have these style elements and these styles are what gives the district its distinctive appearance.

The best examples of the period revival styles found in this district illustrate the distinctive characteristics that make them good example of their particular styles. For example, the Colonial Revival houses all have strong symmetry in their form, massing and details. Their multi-light openings, returned eaves and simple classical details are typical of the style. They also represent the typical size and character of houses in this district; that is, they are not large, heavily detailed examples of period revival styles, but modest-sized houses with a similarity of size, scale, and details that complement each other. Individually, they are not significant, but together they make up a harmonious group of Colonial Revival style homes.

The Colonial Revival style is the most popular style seen in this district and there are many variations. The houses are the most formal and detailed. There are several less detailed examples that reflect these houses in the district, including the houses at 440, 514, and 604 N. Garfield Ave. and 1139 Columbus Circle. A popular variation of the Colonial Revival style, the "Cape Cod," is also seen in this district, and good, intact examples of this type of house are seen at 1124 and 1157 Columbus Circle, 1026 Glen St., and 1129 E. Milwaukee St. The house at 1124 Columbus Circle has a distinctive front wood siding of diagonal boards and interesting trim, while the house at 1129 E. Milwaukee St. features a covering of fine stone veneer. These houses, like the more elaborate ones in the district, have a similar size, scale, and similar details that add to the cohesive nature of this district.

In this district, the Tudor Revival style is used primarily in the English cottage variation. The best example of this is the house at 1116 Columbus Circle, which has a large half-timbered second story. A smaller house with a stucco covering and half-timbering is 1163 Columbus Circle and it is a very good example of a design that tries to mimic a small English country cottage.

The steeply-pitched roofs of the style are the primary details of the houses at 1204 and 1208 Columbus Circle. This detail is very typically seen on more modest Tudor Revival-influenced houses. Sometimes, a steeply pitched roof is the only Tudor Revival detail used in a vernacular houses of this era. The house at 1208 Columbus Circle has distinctive arches over second story windows that suggest a thatched roof and the broad hip roof of 1204 Columbus Circle also gives this illusion, features often used to give these houses the English cottage look. A more interesting hip roof and broad front wall can be seen on 1193 Columbus Circle, an unusual way to give the house its thatched roof and English cottage appearance. These distinctive details make this house stand out in the district, although its scale and size are typical of the district.

Of the less commonly seen period revival houses in Wisconsin, this district has a few examples. The house at 1164 Columbus Circle is a very unusual house with weathered brick construction and details that suggest both the Mediterranean and Spanish Colonial Revival style. More typical of the Mediterranean Revival style are the round-arched openings of 1129 Columbus Circle, an interesting, almost ranch-like house with an unusually smooth brick veneer and Mediterranean details.

Of the French revival variations, there are two houses in this district that feature these characteristics. The house at 1171 Columbus Circle is a small and simple example of a Norman Revival-inspired house. Its broad gables and round turret entrance are typical details of this style. A simple French Provincial inspired house is at 1144 Columbus Circle. Its stucco walls and high hip roof suggests a French country house as its inspiration.

Although these examples stand out as the most distinctive in the district, the remainder of the contributing period revival houses are also distinctive, as a group. They may have fewer details or slightly less integrity, but taken together, they present a cohesive appearance of a 1920s and 1930s period revival neighborhood that is isolated from its neighbors both by physical site characteristics and by internal style characteristics.

The building of modest-sized period revival houses in this district continued in the 1930s and early 1940s. Most of these houses reflect a "streamlined" or "modern" variation of the Colonial Revival style. In other words, their style details are more simplified and stripped down, reflecting the building limitations of this era. The best examples of this continuation of the period revival during the 1930s and 1940s are the Colonial Revival-influenced houses at 1219 Columbus Circle (built 1937), 424 Elm Lane (built 1941), and 1220 Columbus Circle (built 1943). One contemporary design was also built in the 1940s: the Ellis Jensen House (1110 Glen St.), built in 1942. This unusual design does not reflect the period revival houses in the neighborhood, but its high quality of design, unusual concrete block construction materials, and overall complementary size and scale makes it a contributing building in the historic district. There was an end to building in this district in 1943, then beginning in 1950, several Ranch style homes were built as infill on the few vacant lots that remained in the district. These houses were not a continuation of the building of the 1920s-1940s that dominates the district, rather they infill houses of a more recent period that filled up the available land space and, therefore, they have .been determined to be non-contributing.

There are no other neighborhoods in Janesville that have such a large, distinctive, and cohesive concentration of modest, yet high-quality, period revival houses. The most important examples of large period revival houses in the city are generally interspersed within the Courthouse Hill Historic District or in neighboring areas. This factor makes this district stand out as significant and unusual in the city.