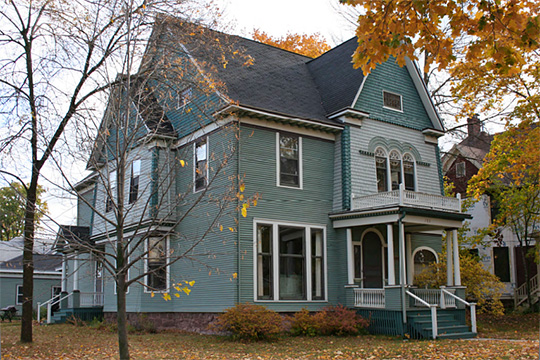 The Chapple and MacArthur Avenues Residential Historic District was listed on the National Register of Historic Places in 2014. Portions of the content on this page were adapted from a copy of the original nomination document. [‡] Adaptation copyright ©' 2014, The Gombach Group.

The Chapple and MacArthur Avenues Residential Historic District is comprised of five different subdivisions developed between 1872 and 1888, lot sizes vary slightly, but are generally anywhere from 25 to 40 feet in width by 135 to 150 feet deep. Streets were platted consistently as 66 feet wide, with alleys measuring 20 feet. Architectural styles found in the district are primarily Queen Anne, Shingle Style and Colonial Revival examples (or a mixture thereof); however, Craftsman and later period revival styles are also evident. A number of homes, while retaining their original form, massing and a few stylistic details, do not exhibit any specific style and are considered vernacular forms. Homes range from one-story to two-and-a-half stories in height. A good number of the homes retain their original sheathing (or have been restored to their original sheathing), including brick, clapboard, wooden shingles or stucco, while some have been altered with either vinyl or aluminum siding.

Many of the homes have associated free-standing garages behind the houses.

In July of 1872, the first of the five different subdivisions that comprise the subject historic district was platted. Austrian's Addition comprises the northernmost point of the subject historic district and includes only two of the district's homes. The subdivision's proprietor was Julius Austrian, born Julius Osterreicher in Bavaria. Arriving in New York at the age of twenty-three, the young Jewish man used the English equivalent of his last name and settled in LaPointe in 1844. Austrian took advantage of the demise of the American Fur Company, purchased its lands in 1853 and quickly became one of the largest landowners in the area. He opened a store in Bayfield and, along with other investors, established the LaPointe Iron Company to mine ore. After moving to Eagle River in 1862, he later moved to St. Paul, Minnesota; his place of residence at the time of the subdivision's platting. The homes of saloon keeper James Breen (wife Mary) and real estate man Robert C. Heydlauff (wife Effie), built in 1887 and 1888 at 507 and 513 Chapple, respectively, were among the first twenty homes to be built in the historic district.

The next subdivision platted within the confines of the historic district was that of Vaughn & Humbird, in August 1883. The proprietors of the subdivision were Emeline E. Vaughn, John A. Humbird, Edwin W. Winter and John C. Spooner. Of the subdivision's namesakes, Emeline Vaughn was the wife of Samuel Stuart Vaughn, who laid out Vaughn's subdivision in Ashland in 1871 and is noted as having been instrumental in convincing the Wisconsin Central Railroad to terminate its line in Ashland. Emeline built the Vaughn Library in 1887 as a tribute to her late husband. John A. Humbird was the son of railroad builder Jacob Humbird, the president of the Pioneer Iron Mining Company, as well as the namesake of Humbird, Clark County, Wisconsin. John A. Humbird would in 1889 become a shareholder in the Victoria Lumber & Manufacturing Company in British Columbia. John Spooner was an attorney who specialized in railroad law and, as of 1870, resided and practiced law in Hudson, St. Croix County, Wisconsin. As of 1883, Edwin W. Winter was residing in St. Paul, Minnesota and was the assistant president of the Chicago, St. Paul, Minneapolis & Omaha Railway.

Between 1884 and 1885, the Ashland community saw a number of significant improvements, including the installment of its first waterworks (the Holly system), a gas works and an electrical light plant. In 1885, Lewis Cass Wilmarth built his Georgian Revival-style mansion along Georgia Avenue (present-day Chapple Avenue), just south of the Northern Pacific Railroad line and within the boundary of the Chapple & MacArthur Avenues Residential Historic District.

As of April 1887, less than a month after Ashland was incorporated as a city, the weekly paper reported, "The building boom has struck the Vaughn & Humbird Addition and that division of our city will soon be a busy one." It lists a number of Ashland residents that were "preparing to build fine residences there ... ", including among them roofing, cresting and cornice manufacturer George W. Marshall, who would indeed build a home that year at 714 9th Avenue West. More than fifty-five homes in the district are located in the Vaughn & Humbird Addition, with five additional properties having legal descriptions that include lands in both V & H, as well as the Ellis Division.

Approximately ten homes in the district—all located in the Vaughn & Humbird Addition—have ties to the Osborn Home Association (OHA; also referenced as the Frank Osborn Home Association). The OHA (or FOHA) was organized in May 1887 and Frank E. Osborn served as manager. Little is known of Osborn. He was born in Ohio in 1860 and, by 1880, was working as a telegraph operator in Hudson, Ohio. By 1887, he was living and working in Ashland, Wisconsin. The OHA, in association with the Ashland Savings & Loan Association (also established in May 1887), was a real estate development company. It sold vacant lots, financed new home construction and constructed homes which it then sold. An initial sale of lots was held by the OHA at the Ashland Stock Exchange Building at the end of May and eighteen lots were sold. The weekly paper reported on 4 June 1887 that "Frank Osborn is in Minneapolis securing plans for several new buildings to be built in the addition owned by the FOHA." This suggests that the designs for those structures were not provided by local Ashland architects and it is perhaps likely that standardized plans were utilized for this venture. As of the end of June, Osborn had an office in the Garnich Block on 2nd Street. Osborn resided in Ashland through at least 1889. However, while identified in 1890 as manager of the OHA, he is listed as residing once again in Hudson, Ohio. Among the first OHA homes constructed in the district were for Rev. A.S. Collins (705 MacArthur, cited as nearly completed as of 25 June 1887) and lumber inspector Edward H. Taylor and his wife Lizzie (723 MacArthur, which was noted as nearly completed as of 16 July 1887). As of November 1887, it was noted that "nine handsome residences, costing an average of about $3,000 have been built in the Osborn Home Association addition this summer."

In April of 1887, Asa D. Polk and Almon P. Dodge would plat Polk's Addition south of Vaughn & Humbird's. At the time of the plat, Polk was an attorney who resided in Minneapolis, Minnesota; he would by circa 1900 move to Brainerd, Minnesota, where he continued his law practice. Although nothing could be confirmed previous to 1892, an Almon P. Dodge appears to have been involved with the Ox Mining Company, as well as run the AP Dodge Co., a real estate and bond business, and the Montana Home Building Company in Helena, Montana. Six of the district's homes are in Polk's Addition, while three homes straddle the dividing line between Polk's and the Ellis Division and include portions of each in their legal descriptions?

Four months later, in August 1887, the Ellis Addition would be platted by Dr. Edwin Ellis, a physician who came to Ashland in 1855. The financial panic of 1857 forced him to leave shortly thereafter; however, he returned in 1872. Dr. Ellis led the fund-raising drive that ultimately brought the North Wisconsin Academy (present-day Northland College) to Ashland. Eleven of the historic district's properties are included in the Ellis Division, while an additional eight properties share land with either the Vaughn & Humbird's Addition or Polk's Addition.