Photo: House on Bishop Hollow Road at the Entrance to Ridley Creek Park. Listed on the National Register of Historic Places in 2000. Photographed by User:Smallbones (own work), 2011, [cc-by-1.0 (creativecommons.org/publicdomain/zero/1.0/deed.en)], via Wikimedia Commons, accessed November, 2012. 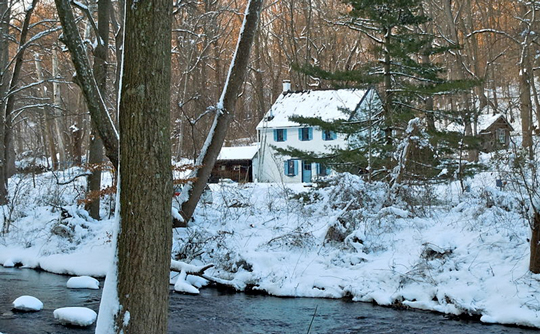 Edgmont Township [1] has a rich history as evidenced by its numerous historical resources. The earliest European settlements in what would become Pennsylvania occurred in Chester County, part of which would break off to form Delaware County in 1789. Before Europeans arrived in Pennsylvania, this area was inhabited by the Okehocking tribe of Lenni-Lenape Indians. The northern part of the Township was once part of the 1701 Okehocking Reservation, set aside by William Penn for use by the Lenni-Lenape after European settlement had driven away much of the game in the area. This reservation is believed to be the first land in America specifically allocated for Native American use. As the Lenape migrated west, this land was sold to local European residents who farmed or raised dairy cattle. Original large tracts of land constituting family homesteads were subdivided throughout the 18th and 19th centuries. Edgmont remained an agricultural community through the mid-20th century.

Early industry revolved around grist mills for grinding grain, and saw mills for converting forest trees into lumber products. Crum Creek and Ridley Creek provided water power for the mills. Providence Mill, on Ridley Creek, was in operation in 1718. This area, since renamed Sycamore Mills, retains many of the houses and structures that were part of this early industrial community.