Photo: The Pratt House at the Colonial Pennsylvania Plantation in Ridley Creek State Park, Pennsylvania. The Park was listed on the National Register of Historic Places in 1976. Photographed by user:JC1008 (own work), 2011, [cc-by-3.0 (creativecommons.org/licenses/by/3.0)], via Wikimedia Commons, accessed July, 2017. 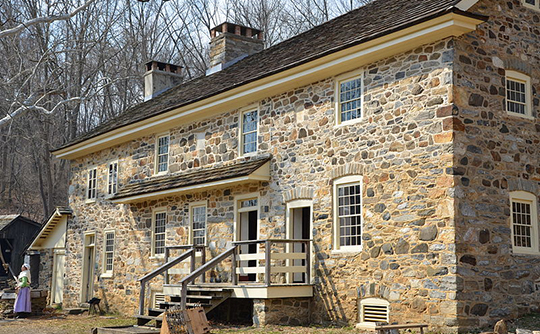 Significance – encompasses a 2,400 acre area comprising a mill village complex and 25 farm complexes. The physical and spatial remains of this rural farm district are virtually undisturbed by modern development. The area was initially settled by English Quakers in the late 18th and early 19th centuries. The early great roads from Philadelphia and Chester made the area accessible to farmers and provided a convenient means of transportation for agricultural and mill products.

Throughout most of its history, the area remained agrarian. As the population increased in the 19th century, cottage industries such as weaving and tanning began to appear. The Regester Chair Factory on Gradyville Road prospered as a family business from 1801-1873. The mills located in the Sycamore mills area spawned a nucleated industrial community which prospered until the mills were destroyed by fire in 1901.

Architecture Buildings of the complexes in the district allow for specific study of different types and categories of buildings by functional use. Further the buildings in the complexes make possible studies in relation to one another and also in relation to various elements within each individual complex. The various patterns of architectural changes and styles that have taken place over the centuries is also apparent. Of particular note are the Worrall House with its medieval features, the Sycamore Mills Complex with its mansions and tiny workers' houses, and English Manor House of the Jefford's Estate. Many of the buildings are excellent examples of architectural styles or adaptations and many would qualify for listing on the National Register by themselves.

Agriculture Within the boundaries of the historic district is a major segment of an agricultural community representing almost 300 years of continuous occupation and development. The present physical remains of these once thriving farm complexes are unique documents from which to study the evolution of agriculture in Southeaster Pennsylvania and the nation as a whole. These interrelated farm sites when combined with other associated historical materials take on a new meaning for understanding socio-economic change in our past agricultural society:

Although the farms are no longer functioning, they provide the inter-connected core from which to reconstruct a rural society; a society that formed the basis and met the needs of our growing nation.

For more than a century, from 1725 until 1840, Pennsylvania was foremost among the colonies and states in the production of food. Her pre-eminence in agriculture during the formative years of the nation was due not only to the varied agricultural genius of the several nationalities that comprised her population, but also to a rich heritage of land. Pennsylvania was "the bread basket of the nation" because much of her soil was fertile and because her farmers were traditionally wise in the lore of the land."

Industry Historically, the area now contained in Ridley Creek State Park has been used almost exclusively for agrarian pursuits. However, there were several notable exceptions. The most important of these was Providence Mill, a water corn mill established in 1718. Later owners erected a saw mill in 1746. Then, in the late 18th century, a plaster mill was operating, adjoining the grist mill. By 1810, the plaster mill was replaced by a Rolling & Slitting Mill – all known as Bishop's Mills.

Conservation Ridley Creek State Park is the largest single holding of land open to the public in Delaware County. As such, it provides a contrast to the over-developed and congested areas that abound in this area. It serves as a refuge for all wildlife and plants, and efforts are made to maintain a variety of habitats in the park. The park also serves as a refuge for the historic community represented by over 100 buildings located in the district. Thirty of the houses are occupied dwellings. Thus they are cared for and hopefully will be preserved.

Education Many school districts in this area make use of the environmental education programs available in the park. These programs serve all school grades and adults with a variety of subjects, field trips and programs, including classes in horticulture conducted by the Delaware County Vocational Technical School.

‡ Ridley Creek State Park was listed on the National Register of Historic Places in 1976. Text, below, was adapted from a copy of the original National Park Service nomination document.