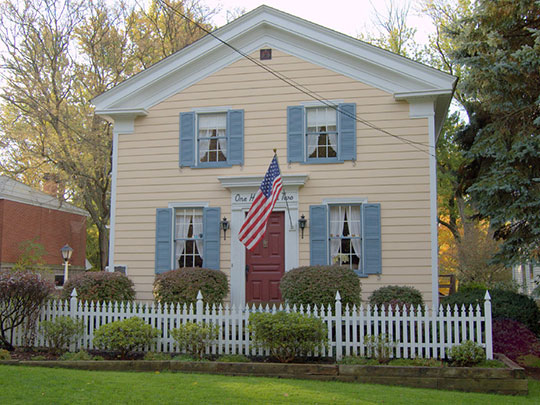 The Chagrin Falls East Side Historic District was listed on the National Register of Historic Places in 2013. Portions of the content on this page were adapted from a copy of the original nomination document. [‡]

The land that is now Chagrin Falls Township and Village were, in the early 19th century, partly contained within Geauga County.

Washington Street was first recognized in 1827, when the Geauga County Commissioners authorized survey of a road from Auburn Corners, Geauga County to the "great falls of the Chagrin." Originally known as Main Market Road, it became known as Washington Street on the 1842 plat map and served as a major transportation route travelling east/west. The Chagrin Falls East Side Historic District is therefore also distinguished for its location along East Washington Street.

The earliest domestic architecture of the Historic District includes the Greek Revival homes of prominent early Geauga County pioneer families who built their homes at the intersection of important transportation route of East Washington Street and Philomethian Street. These pioneer families represented important settlers who contributed to the development of Chagrin Falls including Phineas Upham, A.C. Gardner, George March and Benajah Williams Jr. The homes that they built represent architectural styles that were popular at the time of their construction and reflect the prominence of the owners.

The United States was in the throes of industrialization and modernization in the 1870's, and the prominent Italianate style suited the exuberance of the period. In 1877, the first narrow gauge Chagrin Falls & Solon railroad arrived to Chagrin Falls intersecting with East Washington Street to the northeast/southwest just beyond the eastern boundary of the Historic District. The intersection of East Washington and Philomethian Streets close to the Village center and places of business continued as an attractive location for home construction reflecting the popular architecture of the period apparent in the Italianate homes of Chagrin Falls merchants Iddo Bailey, James Gates, D.C. Eggleston and Theodore Hintz, wood lathe manufacturer George Ober, and banker George March, Jr. Families subdivided the larger lots of the Historic District to allow for construction of homes by other family members.

In 1890, the narrow gauge was converted to a standard gauge railroad, opening the Village industry to new markets, boosting the economy and easing the transport of goods, including construction materials. The Stick, Eastlake and Queen Anne styles of domestic architecture of the Late Victorian period were built in the Historic District between 1891 and 1897 employing the new technology of woodworking machinery allowing for elaborate three dimensional ornamentation and also the introduction of irregular plan balloon frame homes offering a variety of textures, contrasts and materials. These homes included the Stick home of business owner R. W. Stoneman; Eastlake home of lawyer James Davis and Queen Anne homes of mill manager Everett Kline, livery owner Joel Burnett, Village of Chagrin Falls Mayor and business owners William and Emma Dripps; and, Laura Bailey Giles who was the daughter of Iddo Bailey and mother of builder Charles Giles. With the turn of the 20th century, two Dutch Colonial Revival homes were constructed in the Historic District identifiable by their distinctive gambrel roofs and widely promoted as an affordable housing type. (Gordon, 104). Martha Ober, the widow of lathe manufacturer George Ober, contracted with Rowe & Giles to build her Bungalow type home in 1912. In 1914, Geauga County pioneer family descendant Daniel O. McFarland built the only Craftsman house on the last available lot in the Historic District.

The period of significance begins in 1844 with the incorporation of Chagrin Falls as a Village. East Washington Street became a major transportation route beginning as one of the earliest roads leading to and from Chagrin Falls in 1827. The first narrow gauge railroad intersected with East Washington Street in 1877 just to the north of Philomethian Street and was converted to standard gauge in 1890. In 1896, East Washington Street became part of the Cleveland & Chagrin Falls Electric Railway Company route. This transportation system contributed to the development of Chagrin Falls as a united and established community dependent upon manufacturing and the mills of the Chagrin River. The period of significance ends in 1920. By the 1920's and in contrast to the organic development of the dwellings along East Washington and Philomethian Streets in the Historic District, Chagrin Falls was experiencing the new form of residential development with the advent of planned residential subdivisions, such as the Chagrin Falls Building Company Subdivision located to the south of the Historic District on May Court with homes constructed between 1921 and 1929.