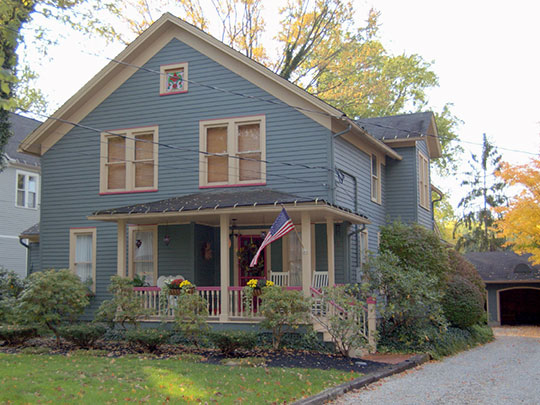 The settlement of Chagrin Falls was originally divided north/south at what is now the Main Street Bridge at the "High Falls" of the Chagrin River with the west side located in Orange Township, Cuyahoga County and the east side located in Russell and Bainbridge Townships, Geauga County, bisecting the Chagrin River and the mills located along its banks. In 1837, the west Cuyahoga County side was platted in an organized grid pattern of small lots as Graves Allotment, named after Noah Graves, founder of the settlement in 1833, part of which is now recognized as the Chagrin Falls West Side District listed on the National Register of Historic Places in 1978.

In 1841, the east Geauga County side of what would become Chagrin Falls was annexed to unite the settlement as part of Cuyahoga county. In contrast to the organized small lot grid pattern of west side, the east side included larger acreage of irregularly shaped lots south of the Chagrin River and located close to the town center, as part of the original Aristarchus Champion Tract and later the Gardner and Halleck Allotment. The east side was platted in 1842 and includes this Chagrin Falls East Side Historic District. In 1844, the entire settlement was incorporated as the Village of Chagrin Falls.

Chagrin Falls was a regional market and industrial center by 1842 with nine mills located along the Chagrin River. Between 1827 and 1843, seven roads either led directly to or connected to roads leading to the High Falls including Cleveland Rd., South Kinsman Rd., Russell Rd., Main Market Rd. (Washington St.), Chillicothe Rd., Ravenna Rd., and Bainbridge Rd.. Washington Street was first recognized in 1827, when the Geauga County Commissioners authorized survey of a road from Auburn Corners, Geauga County to the "great falls of the Chagrin."