Photo: Homes in the 1855 Extension Historic District, Horseheads, NY. The Historic District was on the National Register of Historic Places in 1980. Photographed by user:Lvklock (own work), 2008, [cc-by-3.0 (creativecommons.org/licenses/by/3.0)], via Wikimedia Commons, accessed November, 2014. 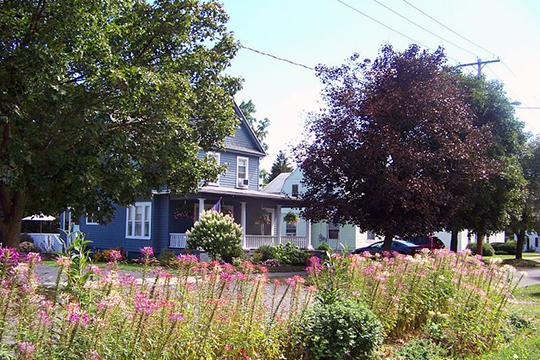 The Horseheads 1855 Extension Historic District was listed on the National Register of Historic Places in 1980. Portions of the content on this web page were adapted from a copy of the original nomination document. [1]

The village of Horseheads, located in the Southern Tier of New York State near the cities of Elmira and Corning, typifies the many small towns settled in the area during the late eighteenth and early nineteenth centuries. The 1855 Horseheads Extension Historic District, the heart of one of Horseheads' oldest residential neighborhoods, is marked by a rich variety of exceptionally well-preserved examples of the vernacular architectural styles once popular in these communities. Grand Central Avenue, the focal point and main axis of the district, is a broad tree-lined boulevard divided by a grass median strip. Other significant elements of the district are located on Fletcher Street, which crosses Grand Central Avenue to form a distinctive cross axis, and Sayre, Pine, Steuben, Central and West Mill Streets.

These pleasant tree-lined streets frame spacious yards occupied by large two and two and one-half story dwellings. Neither pretentious nor unique, the predominantly frame houses found in the district reflect the diversity of architectural styles popular between 1860 and 1920. Here is a medley of picturesque Gothic Revival and Italianate designs, irregularly massed frame houses with Queen Anne details, and the trim horizontal lines of the Bungalow style and the Prairie School influence. Unlike the smaller-scale and much-altered houses in the surrounding residential area, each building in the historic district expresses a distinctive character, at the same time contributing to the architectural harmony of the neighborhood.

Though located only a few blocks away from a bustling commercial district, the aesthetic and social integrity of this cohesive neighborhood have withstood the test of more than a century of growth and change. Only two modern buildings, one-story brick "ranch" houses built between 1950 and 1965 at 607 Grand Central Avenue and 609 Center Street, intrude upon the historic character of the neighborhood. Thirty of the thirty-one buildings located within the established boundaries of the historic district were originally designed for residential use. Offices and small shops have been installed in three houses without undermining the integrity of the buildings or the neighborhood. Another residence is now used as a funeral home. The only explicitly non-residential building in the historic district, the old Horseheads Union School, has traditionally contributed to the residential character of the neighborhood.

With its large but unpretentious houses, spacious yards, fine school building, and tree-lined streets and boulevard, the 1855 Horseheads Extension Historic District evokes many of the images traditionally associated with small-town residential neighborhoods. The rich variety of its architecture, representative of the Gothic Revival, Italianate, Queen Anne, Bungalow and Prairie styles, reflects the changing notions of popular taste and consistent attention to detail and quality craftsmanship that marked the nineteenth and early twentieth centuries. The aesthetic and social integrity of the neighborhood setting itself, maintained and enhanced by the harmony of many seemingly disparate elements, contribute a dimension of significance beyond the individually noteworthy buildings.

[In 1855] ... the Village Board voted to extend the boundary beyond Steuben Street and incorporate the newly developing area. This 1855 extension was built upon over the next half-century, its physical manifestation best represented by the structures of the 1855 Horseheads Extension Historic District. By 1869, Fletcher, Rockwell (now Center) and Sayre Street had been formed, indicating the expansion of the community southwestward from the center of the village. Within several years, the extension of Pine Street to Sayre Street and the connection of Willis (now Grand Central Avenue) and Church Streets completed the physical development of the grid pattern. Grand Central Avenue, the major axis of the proposed district, remained a wide dirt road until 1914, when it was paved and landscaped with a grass median strip to form a boulevard -- a feature rarely found in the context of a small town residential neighborhood.

Similar in scale and complemented by the rhythm of spacious yards and mature trees, well-preserved examples of popular vernacular architecture line the streets of the historic district. Most are the only buildings to have occupied the sites, thus providing visual documentation of the chronology of the neighborhood's development. Several outstanding buildings, in particular, contribute greatly to the integrity of the neighborhood and represent the broad spectrum of architectural styles found in the district. The oldest structure in the historic district, at 217 Steuben Street, is its finest example of a Greek Revival residence. A whimsical Gothic Revival cottage at 606 Pine Street, is the best example of its type in the village. Its fanciful bargeboards, finials, and patterned slate roof are repeated in the privy, located just north of the house. Belvederes and towers mark the two most elaborate of the neighborhood's many Italianate residences, at 116 and 203 Fletcher Street. The latter, a multi-gabled house capped with a belvedere, was built for John E. Arnot, Jr., a banker and congressman. Intact examples of vernacular Italianate design include residences at 302 West Mill Street and 514 Center Street. Many houses within the historic district feature the irregular massing and eclectic details characteristic of the Eastlake and Queen Anne styles. The best preserved examples of such structures are located at 709 Grand Central Avenue and 308 West Mill Street. Two fine twentieth century bungalows, at 205 Fletcher and 506 Grand Central Avenue, and a large home marked by the influence of the Prairie School at 304 West Mill Street, complete the architectural palette of the historic district.

The decidedly residential character of the proposed district has long been enhanced by the Horseheads Union School building. Designed in 1890 by Elmira architects, Joseph H. Pierce and H. H. Bickford, the building occupies a prominent site at the intersection of Grand Central Avenue and Fletcher Street. Decorative brickwork, stone belt courses, and a grand arched entrance add visual interest to the three and one-half story brick building.