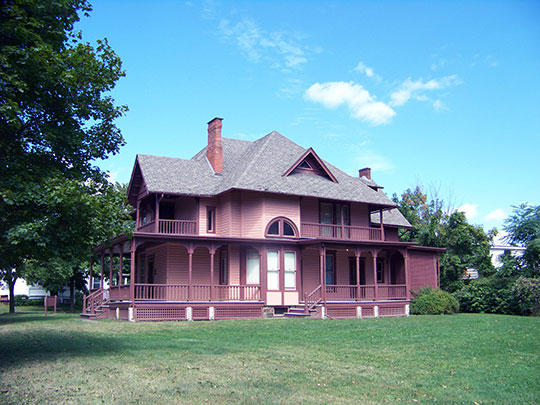 Horseheads, incorporated as a village in 1837, was first settled in 1789. Two years later, the Sayre family, one of Horseheads' most influential early families, established a farmstead southwest of the center of the community. Horseheads' development was greatly enhanced by the construction of the Chemung Canal, passing through the community and linking the city of Elmira to the village of Watkins Glen on Seneca Lake. Authorized by an act of the New York State Legislature in April 1829, the canal provided Horseheads with a link to the Erie Canal and ultimately New York City via Seneca Lake. On July 3, 1830, a ground breaking ceremony took place in Elmira with Mr. Ebenezer Sayre representing Horseheads. The canal was opened for navigation in October of 1833 and for the next two decades, Horseheads enjoyed a substantial increase in trade and total population. Reflecting this period of growth, the Sayre farm property was subdivided for building lots in 1850. At that time, Steuben Street served as the southern boundary of the village. Business on the Chemung Canal reached its peak in 1855. In that same year, the Village Board voted to extend the boundary beyond Steuben Street and incorporate the newly developing area.