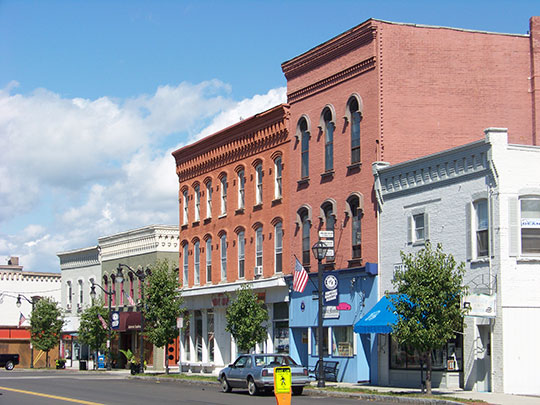 The Hanover Square Historic District was listed on the National Register of Historic Places in 1982. Portions of the content on this web page were adapted from a copy of the original nomination document. [1]

Eighteen of the district's twenty-one buildings are Romanesque Revival commercial brick rows built during the two decades following the 1862 fire that leveled the square. Predominantly two to three stories high, the buildings' street level storefronts are occupied by retail enterprise, while the stories above provide space for professional offices, living quarters, or storage areas. Although many of the storefronts are altered, the upper levels retain a high level of architectural integrity. The roofs are generally flat with decorative cornices of corbelled brick with brackets, dentils, or arched detailing. Particularly fine examples include the Witcomb Block (117-119 W. Franklin St.) and Brown Block (101-109 S. Main St.).

Only three buildings included in the district are not Romanesque Revival style. All three are noteworthy. The Ryant House, originally, an elegant hotel, is a fine example of the Second Empire style popular in the third quarter of the nineteenth century (118-124 S. Main St.). The Southern Oil Company Building, a simple Colonial Revival structure and the Marine Midland Bank, a Classical Revival structure, are the only two twentieth-century buildings in the district.

The almost exclusive representation of a single style and the uniformity of materials used creates a strong sense of harmony and cohesiveness in the district. The Hanover Square Historic District remains an intact, well-preserved illustration of a nineteenth-century small town commercial center in New York's Southern Tier.

Hanover Square, the business district of the village of Horseheads, New York, is significant for its excellent examples of Romanesque Revival commercial architecture. With few exceptions, the Hanover Square Historic District is comprised of attached brick rows of Romanesque Revival structures which were built almost exclusively during the 1860's and 1870's. Ornately corbelled brick cornices characterize this homogeneous district. Relatively undisturbed by the adverse effects of modernization since the 1950's, the district is an excellent example of the commercial center of a 19th-century canal town in New York's Southern Tier.

On September 24, 1779, Revolutionary War General John Sullivan led the retreat of his victorious troops through a forest wilderness inhabited by the Iroquois. Hanover Square stands upon the site where the general ordered the slaughter of his exhausted, ill and starving pack horses. In later years, Native Americans used the bleached skulls to line a trail through the woods.

It was along this path of horses' heads that a permanent settlement was established in 1787. This community, originally called "Horseheads Heads" or "Valley of the Horses' Heads," later came to be known as Horseheads.

The first log cabin was built on S. Main Street about one-quarter mile south of the area known today as Hanover Square. By 1820, three or four dwellings and a grocery were located near the square. Horseheads prospered for the next few years as a convenient resting place for westward travellers. By 1829, a hotel, 2 more stores, and a nearby tannery had been built.

Between 1829-32, the construction of a toll house and a feeder canal directly behind Hanover Square provided Horseheads with a vital link to the Erie Canal via the Chemung Canal. The expansion of trade and the increase of population created the need for housing and services. Hanover Square grew to meet the commercial needs as residential areas developed around the square.

By the middle of the nineteenth century, Horseheads had become a thriving regional mercantile center. Industries were established; residential neighborhoods expanded; and Hanover Square continued to prosper as the center of business. Industries producing carriages and woolen goods prospered; flour and grist mills, saw mills, foundries, box and crate industries, brick manufacturing, and the well-known Kline Iron Works all enjoyed economic success. Hotels grew to accommodate the increasing number of travellers; the 1855 Horseheads Extension (National Register listed, 1980) incorporated outlying areas for the development of housing; and in 1854 the first downtown brick block of stores was built by the newly formed Horseheads Building Association.

Disaster struck Horseheads in August 1862 when a fire leveled the entire square. Rebuilding, however, was rapid. Within two decades the demolished wooden structures had been replaced with brick rows of Romanesque Revival commercial structures. Street level storefronts were generally devoted to retail enterprises, while the stores above provided space for professional offices, living quarters or storage areas.

Early twentieth century construction in Hanover Square was limited. The Marine Midland Bank, a fine example of the Classical Revival style, was built in 1927 on the historically significant site of the well-known hotel, the Platt House. The boulder in front of the bank commemorates the Revolutionary War event which led to the settlement of Horseheads (W. Franklin St.). A Colonial Revival style building was built in 1929 to house the corporate offices of Southern Oil Company (124 W. Franklin St.). Horseheads' twentieth-century growth was stimulated during World War II when, in 1942, a large army supply depot north of Hanover Square was built. Residential neighborhoods expanded to accommodate the depot workers and the downtown Hanover Square merchants prospered as demands for commercial services increased.

Mid-century development was enhanced by Horseheads' proximity to Route 17, making the village a convenient and desirable residential location for Elmira's and Corning's commuters. Spurs and highways constructed during the 1950's bypassed Horseheads, thus reducing the village's importance as a regional commercial center. Hanover Square maintained its economic vitality by attracting local patronage.

Relatively undisturbed during the last three decades, the buildings in the Hanover Square Historic District retain much of the character of a late nineteenth-century bustling mercantile center. Although many of the storefronts have been altered, upper stories are remarkably intact and well-maintained examples of Romanesque Revival commercial brick rows.