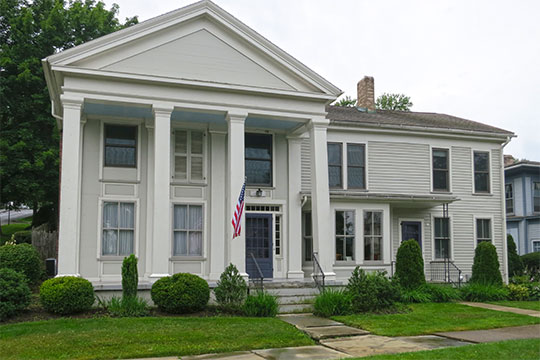 The early development of the area that would become the City of Corning is synonymous with the early development of the region. In 1788 two investors, Oliver Phelps and Nathaniel Gorham, purchased six million acres of land in Western New York from the State of Massachusetts. In that same year Phelps and Gorham signed the Treaty of Buffalo Creek with the Iroquois which stated that the Iroquois would remain on the land west of the Genesee River. Therefore, Phelps and Gorham were left to sell approximately a third of the original acreage. Consequently, the Phelps and Gorham purchase was divided into townships of approximately six miles square.

In the early 1830s Erastus Corning, a wealthy merchant and financier, formed a company in order to purchase land on the south side of the Chemung at the head of the feeder canal. In 1835 the Corning Company purchased 340 acres of sparsely developed land occupied by a few scattered farms. By 1836 Erastus Corning had acquired more acres of land and the settlement of Corning, named after its primary founder, was established.

Soon after, its initial establishment the Corning Company began to design a plan for future development within its parcel. "A grid system of streets, with alleys bisecting each block east and west, was surveyed. The avenue closest to the Chemung, Tioga Street, was reserved for railroads and associated industry. The next avenue south, Market Street, was reserved for commercial purposes. Market Street was followed by a road that was later called Erie Avenue. This street, and all others south of it up to Spencer Hill, were for residential purposes. This gridiron plan was a common approach to urban development and land use in the united States during the early nineteenth century. The circa 1835 layout of Corning remains evident today and is particularly intact within the boundaries of the Southside historic district.

The Southside Neighborhood characterizes the ideal concepts used in city planning before the advent of the automobile. Churches, schools, grocery stores, parks and the merchants of Market Street were all available within a few blocks walking distance from the Southside residences. The use of the conventional grid was also believed to stimulate growth because of its simplicity and comprehensive parcel layout. This city planning effort embraced individual enterprise, industry and capitalism generating an organized and diverse city. This diversity and development has produced a visual evolution of architecture throughout the streets of Southside.

Throughout the early nineteenth century lumber and coal were the thriving industries. The dense forests covering the Genesee Country were cleared and sent down the Chemung Canal to open timber markets. Corning prospered on the wholesale lumber firm of Walker & Lathrop which processed large volumes of lumber from their mills in Pennsylvania to a further refined state in Corning then to be shipped via canal or railroad. Beginning in 1835, coal mining also became an important industry in Corning's growth and development. The completion of the Chemung Canal and the feeder canal in the 1830s was instrumental in facilitating the shipment of coal and lumber. These growing industries and the ease of shipment through the system of canals and waterways lead to the prosperous development of surrounding cities, villages and towns, including Corning.

After 1835 Corning established prosperity not only through the canal but also through the advancing technology of the railroad. Completed in 1839, the Corning-Blossburg railroad connected the coal mines of Pennsylvania with the Chemung Feeder Canal in Corning. Corning then became the transfer point for all rail to canal shipment. In 1849, the Erie Railroad which spanned the entire Southern Tier connecting individuals to Pierpont and Dunkirk N.Y., was completed. That year, Corning was claimed as the third busiest inland port in New York State.

Corning became a main attraction for commerce and industry in the nineteenth century. Lumber continued to be one of the major agricultural products well into the late 1860s along with the coal trade which clearly initiated the success of the canal and completion of the railroad. However, in addition to the success of these industries Corning was also developing a growing and well established business district. By the 1960s a prosperous business district was developed along Market Street.

Through all of this growing-industry the Corning Company's plan of 1835 for the Southside began to take shape-The Southside development paralleled the growth of the commercial and industrial interests of the village. From the beginning of settlement through the growing wealth of industry during the 1830s the area within the Southside neighborhood began to reflect a wide range of building, from high style residences of wealthy merchants and railroad managers, to laborers and farmers.