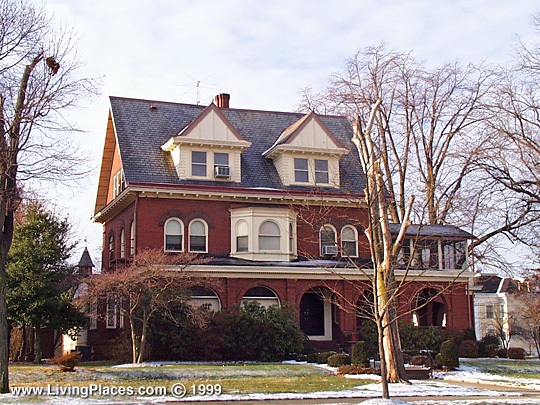 The Historic District was listed on the National Register of Historic Places in 1980. Portions of the content on this web page were adapted from a copy of the original nomination document.

The Berkeley Square Historic District is an architecturally intact residential area located along the Delaware River in northwestern Trenton.

A photograph of Berkeley Avenue in 1900 shows the residences standing on naked lots, with the avenue still unpaved and lacking street lights. The area soon developed as an upper middle class suburb. ... the construction of Route 29 between Berkeley Square and the river ... (has) contributed to the deterioration of the area.

The architecture of the Berkeley Square area is characterized by eclecticism, both in the wide range of style represented in the block and in the variety of building materials, architectural details, and other elements. In addition to the Victorian Eclectic style, other styles of the period which are represented in the Berkeley Square Historic District are Queen Anne, Stick style, Italian Villa, Colonial Revival, Classical Revival, Tudor, Romanesque, and Bungaloid. Nevertheless, there are certain common characteristics which are shared by many of the buildings in the area. Nearly all of the houses are 2 1/2 stories high, with slate, composition, or more rarely, tile roofs. The houses tend to have spacious proportions often with rear kitchen wings and full porches on the facades. Dormers are common, but not universal. Most houses have chimneys; interior, exterior, and end wall types are all common.

The houses are set back from the street at least 30 feet (as required by the original, January 1892 sales agreement), and are on well-landscaped lots which typically measure 50 x 100 feet, but range from 50 x 125 feet to 100 x 200 feet in size. Although there was no planned landscaping within the area as a whole, the houses are often sited upon slightly elevated terraces, and large trees are regularly spaced along the streets and avenues.

Berkeley Square Historic District is a well-preserved six block area which was developed as "Cadwalader Place," a planned residential community, organized and constructed between 1890 and 1910. The area provides an excellent illustration of suburban residential planning which dominated late nineteenth century concepts of urban place; and to which the middle class migrated in an attempt to benefit from the best of both urban and rural life. Berkeley Square has local significance as a prime example of the early development of Trenton's suburban neighborhoods, containing a high degree of architectural variety, quality and integrity.

In 1823 Thomas Cadwalader inherited "the Plantation in New Jersey in Hunterdon County, NJ." upon the death of his father, Lambert, and the release of dower rights of his mother, Mary. In 1828, a road was laid through the middle of the tract, running east and west. In 1873, Thomas Cadwalader left his estate to his five children. The estate was to be divided equally among the five, with the two sons administering their sisters' property in trust.

In 1890, John and Richard Cadwalader began to develop the land—which had been in the family since 1776—for residential use. The land was surveyed by Elbridge G. Weir, Civil Engineer. A map, designated "Plan of Cadwalader Place" and dated November 1, 1890, was filed the following year. In 1891, the daughters agreed to begin selling part of their shares to their brothers, on the Plan of "Cadwalader Place." In 1891, the roads now extant in the area including Riverside, Parkside, Berkeley and Gouverneur Avenues, were surveyed and filed. Some land was purchased by the City of Trenton for schools and parks. Edmund C. Hill was hired as sales agent and promoter. Hill was a prominent Edwardian civic leader of Trenton who was active in a variety of civic affairs, particularly in respect to park developments, and who served as the head of the Trenton Chamber of Commerce.

Before the building lots were put on the market, further improvements such as sewers, utility lines, gas lines, city water, and sidewalks were provided. The lots were then sold to middle and upper-middle class families eager to escape the high density crime, pollution, and other ills of urban life. The community was promoted as "one of the finest residential suburbs in America" with "all the comforts of country life without losing any of the good features of city life."1 Urban amenities included mail delivery three times daily; trolley service and a stop on the Belvidere Delaware railroad; and police and fire protection. Schools, libraries, and churches were within walking distance. At the same time, rural scenery and spaciousness were at least partially preserved. Lots were considerably larger than typical urban lots, with from 50 to 100 feet of frontage and 125 to 200 feet depth. Cadwalader Park and the Delaware River were nearby. To quote from the prospectus "'Cadwalader Place' presents the never failing charms of clean pure air, vistas of river and mountain, fine old trees, well-kept lawns and beautiful shrubbery ..."1

A semi exclusive, "nice" neighborhood was one factor which encouraged families to move to the suburbs. "The excellent class of the present residents and the attractive nature of the dwellings afford the best guarantees against future depreciation."1 Restrictive covenants in the deeds required all houses to cost more than $3,000 and be of "artistic architecture" and excluded saloons and commercial operations. The social amenities available were suitable for the upper middle class families for which Cadwalader Place was developed. A country club, canoe club, a dancing class, a boys brigade, a little girls' sewing class, a ladies' sewing society, and a whist club were available for residents. The Cadwalader Public School served the neighborhood. "It is generally considered the best in the City of Trenton. The building is modern, the faculty unsurpassed, and the appliances for instruction up-to-date. The building is adorned with flowers, plants, engravings, and art objects that are silent but highly desirable to juvenile development."1

The Cadwaladers and Hill were private, capitalist entrepreneurs who recognized that rural tracts, when subdivided and developed, could be sold at nearly the price of urban land. The developers also were prepared to give mortgages on up to the full price of the lots, at five percent per annum, a substantial rate.

Berkeley Square was quickly filled with well-built homes of many of Trenton's doctors, lawyers, businessmen, and other professionals.

Gothic Revival; Latin cross; medium gabled cathedral. Smooth-faced ashlar; leaded stained glass windows; two rows of multiple, paired windows, one along galley, second at ground level; double gothic arched portal with plain archivolts. The cathedral itself is connected to what appears to be an older church. This structure has a single story with a high gabled roof, with a slight kick. Battlements on tower and projecting bay. Built of coursed and uncoursed rock-faced ashlar. Great variety of windows including a rose window, and extensive stained glass and stone tracery. There is a hexagonal spire, a belfry and bells, and a smaller open belfry. Modern addition added to older church.

Cadwalader Place was planned, developed, and promoted as a prime suburb. It was "the best part of Trenton to live in." Many of the houses were designed by architects who promoted the most fashionable architectural styles and progressive interior amenities of the day.

The district contains 107 buildings which exemplify the architectural eclecticism of turn-of-the-century suburban domestic architecture. The area contains a "portfolio" of what can be categorized as "Late Victorian" architectural styles. The houses of this period tend to be of ample proportions, with numerous windows and high ceilings.

Many of the homes built for Cadwalader Place were designed in the Victorian Eclectic mode and display a variety of forms, textures, colors, and materials. The use of elements from classical, Gothic, Renaissance, and other styles contributed to the diversity. The various ways of juxtaposing architectural elements such as patterned shingling, stained leaded glass, and decorative trim, distinguished individual structures. The result was fanciful and richly-decorated. West State Street and Berkeley Avenue have excellent examples of Victorian eclectic architecture.

The architectural value is enhanced by its high level of architectural integrity. Nearly all of the over 100 structures within the proposed district boundaries add to the cohesiveness of the district.

There are only three structures that detract from the architectural integrity of the district. Substantial alterations are noticeable on only several of the structures, including a modern addition to Trinity Cathedral Day School which reflects the architect's concern that mass and building materials integrate it with the older structures in the neighborhood.