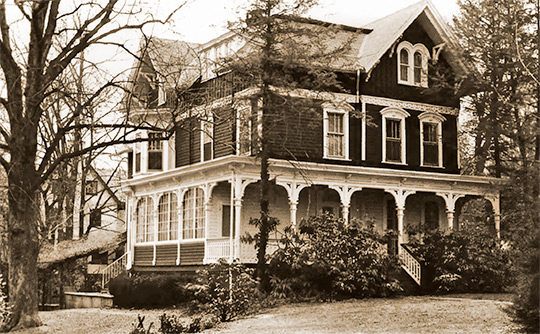 Located an one of the first ridges west of the Meadowlands and Palisades in northeastern New Jersey, the Borough of Glen Ridge is an overwhelmingly residential suburban community that was largely developed between 1870 and 1940. A wooded ravine cut by Taney's Brook bisects the community; it is paralleled by two commuter railroad lines and the major east/west street, Bloomfield Avenue. The borough's principal north/south thoroughfare, Ridgewood Avenue, runs perpendicularly to these features. A small civic and commercial center is located at the intersection of Bloomfield and Ridgewood Avenues, outside of which the community's tree-lined and gas lamp-lighted streets are fronted by detached, single-family dwellings.

The Glen Ridge Historic District's architecture is representative of the late 19th and early 20th centuries and its housing stock includes examples of many of the styles popular during that era. Although present in the District, such Victorian styles as the Italianate and Second Empire are not widespread, not surprisingly since residential development did not begin in earnest until the 1880s and 1890s. The community's late 19th/early 20th century building boom was dominated first by the Queen Anne style and subsequently by the Colonial Revival. Other styles introduced at that time which also influenced the District's architecture in varying degrees include the Shingle, Tudor Revival, Mission, Spanish Colonial Revival, Prairie School and Craftsman modes. The Tudor Revival emerged as the most popular of these styles in the World War I era and thereafter was second only to the Colonial Revival in popularity in Glen Ridge.

The National Register nomination for the Glen Ridge Historic District was prepared in 1980, based on a 1978-79 historic sites survey of the borough. Rather tightly delineated at the time, the District's boundary excludes not only those portions of the community that were developed after 1930, but also several areas that had been built-up by the 1920s. In 1986, those portions of Glen Ridge outside of the District were re-evaluated as to their National Register eligibility and three areas were identified as appropriate additions to the District, two at its southern end and one on the north.

In terms of architectural character and development pattern, the three additions are compatible with the original Glen Ridge Historic District. The development of the northern and southern ends of the borough conforms to the physical pattern and "progressive" planning principals firmly established in the community early in this century. Largely built-up in the post World War I era, the three additions have a suburban residential character like that of the original district with tree-lined and gas-lighted streets fronted by detached, single family, revival style dwellings that range from the modest to the quite substantial.

The additions' houses illustrate the evolution of the community's domestic architecture in the years between the two world wars. The vast majority of them date to the 1920s and early 1930s and exhibit Colonial Revival or Tudor Revival influences. Both of these styles appeared in Glen Ridge before 1900 and in the post-World War I era came to dominate residential construction. Whereas the earlier Colonial Revival houses of Glen Ridge had typically been derived from Georgian prototypes, those of the additions are largely based on the more informal, vernacular 18th century architecture of eastern America. While interpretations of the Tudor Revival style were fairly limited and restrained in Glen Ridge around 1900, exuberantly detailed Tudor Revival houses proliferate in the additions.

The physical character of the additions continues the development pattern introduced into Glen Ridge by late 19th century developers and builders, and codified by the subsequent actions of the newly established borough government. The Borough of Glen Ridge was created from the western part of Bloomfield Township in 1895 through the efforts of residents unhappy with the government of Bloomfield and the lack of municipal services in their neighborhood. Both the new municipal government and early civic leaders acted to provide progressive civic improvements and to protect and enhance residential property values. They also sought to preserve the pastoral character of the community, its original attraction for urban emigrants, and to ensure its continued development as a garden suburb. Derelict mill properties along Taney's Brook were purchased to protect them from commercial development, leading eventually to the preservation of the entire ravine as a park. All streets were paved after gas, sewer, and water lines had been laid; street trees were planted in ample curb strips between the sidewalks and the pavement.

In the vanguard of New Jersey communities to engage in progressive planning, Glen Ridge commissioned a professional planning study in 1909, adopted a building code and established a building department in 1910, and enacted a zoning ordinance in 1921. As recommended in the 1909 study, a municipal center was created at the intersection of Bloomfield and Ridgewood Avenues, telephone and electric lines were buried where feasible or run along rear property lines, and the existing pattern of curb strip with trees was continued along newly opened streets. Land use was regulated and standards set for minimum lot size, maximum lot coverage, and building set backs. Commercial activity was limited to the immediate environs of the civic center. The community's few small scattered industries were eliminated, since almost the entire community was zoned for single family dwellings. These patterns and policies shaped the development of the northern and southern ends of Glen Ridge in the decades after World War I, ensuring that these new neighborhoods conformed to the community's historic suburban image.