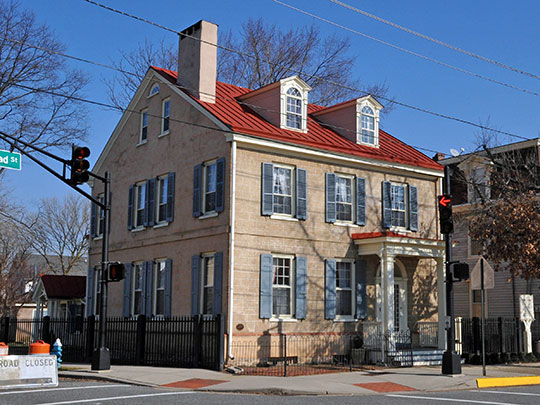 Burlington is a city of neighborhoods with 332 years of architectural and political history. The City has been shaped by the full spectrum of transportation and land development changes that have occurred within the United States. Although the City has a traditional Main Street and a picturesque riverfront park, it has struggled to maintain prominence in a sprawling metropolitan region.

The City of Burlington is bounded by the Delaware River to the north. In addition, Burlington Island lies entirely within the City borders, but is not physically connected to the main land. The Island is managed by the Board of Island Managers and remains in a semi-natural state. The Assiscunk Creek weaves its way through the city with the neighborhoods of Historic Yorkshire, New Yorkshire, and Laurel to the west and East Burlington and Columbus Park to the East. The Assiscunk is tidally influenced by the Delaware River along its entire length through the City. London Moat, or City Ditch as it is commonly called , is the body of water that flows through JFK Park north of Route 130.

High Street, Burlington's "Main Street," is a place where people from all neighborhoods can come together to shop and dine locally. Broad Street, which intersects High Street contains a mix of residential, office, and commercial uses and also carries NJ Transit's River Line light rail through downtown.

Freight service dates to 1833 when the Camden&Amboy opened as the State's first railroad. Commuter rail service was restored in 2004 via the River Line light rail. The River Line is a modern, diesel light rail line which connects the City of Burlington to Trenton, Camden, and points in between. Connections can be made to travel to New York and Philadelphia. Two stations exist within the city: Burlington Towne Centre serves the downtown and waterfront and Burlington South is a park/ride station adjacent to the Commerce Square Business park.

The City of Burlington is a historic community that has existed for over three centuries experiencing practically all periods of transportation and land development in the United States. The City of Burlington was settled as a port city in the late 17th and 18th centuries. It became rapidly industrialized during the 19th and early 20th centuries and added suburban housing and highway commercial development in the second half of the 20th century.

The settlement of West Jersey and its capitol, Burlington, was well organized: it took two years of preparation in England before the first colonist set foot on the upper Delaware. Plans for the Quaker expedition began in 1675 by a stock company in which many of the settlers were shareholders.