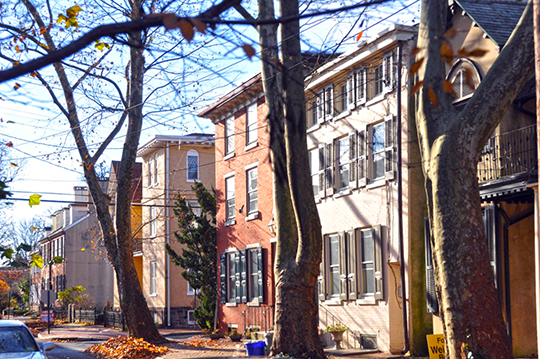 The Burlington County Historic District was listed on the National Register of Historic Places in 1979. Portions of the content on this web page were adapted from a copy of the original nomination document. [‡] .

The City of Burlington, in a unique way, epitomizes the qualities of the 18th and 19th centuries' culture of the Delaware Valley. The area that constitutes the Burlington Historic District was a focal point of this as it reflected the growth of the educational, religious and social forces that shaped the city. In the 1844 edition of Collections of New Jersey, a map of this district is included as an illustration of a cross section of the city.

Social — Since Burlington was a major center during the early days of the nation, many prominent people resided in the city. The Burlington Historic District reflects this population.

The office of Thomas Revell, the first clerk of the West Jersey Assembly, lies in the Burlington Historic District. It is thought to be one of the oldest buildings in Burlington County. The building was moved to its present site in 1966.

Another man of note who was a resident of the district was Elias Boudinot, a President of the Continental Congress. At his retirement he moved to his home at 207-9 West Broad Street. His daughter, Susan Bradford, of Washington's Attorney General, joined him there and became a leader of Burlington Society until her death in 1851. Many distinguished guests, including Mrs. James Madison and Mrs. Alexander Hamilton, were entertained in this home. Boudinot is buried in St. Mary's Cemetery, within the Burlington Historic District.

Ulysses S. Grant and his family purchased the house at 309 Wood Street and the family lived there during the Civil War. He was on his way to this home the night President Abraham Lincoln was assassinated.

Education — Burlington City residents were always concerned with education. Both the Quakers and the Episcopalians believed strongly in schools and provisions for children's education were always a high priority.

St. Mary's Hall is located on Riverbank Street within the historic district. It was founded by Bishop George Washington Doane in 1837. The buildings were originally part of Samuel Gummere's school. It is one of the oldest Episcopalian schools for girls in the country.

Wood Street was known as "Professor's Row" because several members of St. Mary's Hall resided there. John Gummere resided at 222 Wood Street. He is noted as a scientific scholar as well as an educator.

Another aspect of the city's interest in education was the founding of the Burlington Library in 1757 with a charter from George II. Since then the library has had a record of continuous service. The building it now occupies at 23 West Union Street was built in 1864 by a group of public minded citizens.

Religion — The town of Burlington has a rich religious history. The Quakers and the Episcopalians were a strong influence in the city's settlement and development.

The Quakers were the prominent settling group in Burlington, many coming over on the "Kent" in the 1670's. Their intention was to establish a Quaker colony in West Jersey. In December of 1682, the Monthly Meeting of the Friends decided to erect a meeting house. The hexagonal building on High Street was completed in 1687. By the 1780's, the Burlington Meeting had grown so fast that another larger hall was necessary. The newer building was completed around 1784. This building is still used today as it was originally intended. In its graveyard lie Stephen Grellet, the Quaker Apostle and Isaac Collins, printer to the King.

The other church in the Burlington Historic District is on the opposite corner of the street from the Quaker Meeting House. This is the St. Mary's Church Complex, including the Old St. Mary's Church founded in 1703 and now the oldest standing church in Burlington. This complex has previously been placed on the National Register of Historic Places.

Architecture — The Burlington Historic District is a good illustration of a progression of architectural styles from the late 17th century to the early twentieth century. Various streets represent different styles. For example, Wood Street is basically first and second quarter 19th century row homes. Union Street has good example of later 19th century row homes. These two streets have a unified sense to them, with similar brick work and style to each house. On the other hand, on Delaware Avenue, one gets the sense of greater individuality in the construction of the buildings.

Within the Burlington Historic District are examples of two noted architects' work. St. Mary's Church was designed by Richard Upjohn, and 180 Delaware Avenue was built by William Strickland.

Burlington Historic District is representative of a truly historic city, important in the development of the city itself, the state and the country.

The Burlington Historic District is a section of the original town as designed by its Quaker settlers. Although the city grew beyond its original boundaries, this core section remains a basic center of activity, politically educationally, religiously and socially for the entire community. The Burlington Historic District is a tie to the city's past. As the only section with its historic integrity intact, it is a symbol for the entire city of its past cultural endeavors.

Prior to the English settlement, three Dutch families were settled in what is now the city of Burlington. The British arrived on the "Kent" in 1676. Most of these first settlers were Quakers from Yorkshire and London. One of their first endeavors was to design a plan for the city's layout. A main street (now High Street) was developed running at right angles to the Delaware River. The town was divided into twenty properties: ten on the east side of the main street for the Yorkshire settlers, ten on the west for those from London.

In 1696, Daniel Leed described the layout of the city of Burlington, listing the existing streets. Some of the thoroughfares included were High Street, Broad Street, Pearl Street, Wood Street, Talbot Street, Ellis Street, Washington Avenue, York Street and Tatham Street. The Burlington Historic District includes a section of the city included in this early map.

By 1700, a church, schools and the press were well established in the city. The inhabitants considered their city as an important commercial center.

Thomas Gordon in The Gazetteer of the State of New Jersey (1834) describes Burlington as a city laid out on nine streets. He refers to the area on the Delaware River (W. Delaware Avenue). "Those on the River bank, below the town, are beautifully situated, with fine verdant, velvet swords to the river's edge ..."

Woodward and Hageman (1883) call the city one of the "most desirable places for residence and for business ..." They describe the city with commercial interests, containing important religious and educational facilities. They state that many men of prominence and influence considered Burlington their home.

The city's proximity to Philadelphia was a major factor in its never becoming a major port or commercial center.

The History of Burlington and Mercer Counties, Woodward and Hageman. 1883, page 146.