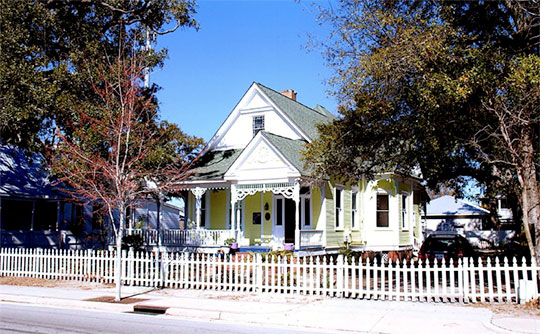 The East Howard Street Historic District was listed on the National Register of Historic Places in 2015. Portions of the content of this web page were adapted from a copy of the original nomination document. [‡]

The East Howard Street Historic District is located east of downtown Biloxi in an area roughly bounded by Jefferson Street on the north, Dukate Street on the west, Holley Street on the east, and Comfort Place on the south. The district is in the East Central area of Biloxi. Centered on East Howard Avenue, it includes contiguous areas to the north and south. The resources in the district are primarily residential. Some residences have been converted to commercial use. There are some commercial properties, mostly on East Howard Avenue, an east-west arterial street.

East Howard Avenue is a two-lane east-west street with sidewalks on both sides of the street with no on-street parking. East Howard Avenue is an arterial street that runs from the Back Bay of Biloxi on the east, through downtown Biloxi and into West Central Biloxi. Other east-west streets include Jefferson Street, Peyton Street, and Copp Street. These are all two-lane streets with narrow sidewalks on at least one side of the street and on-street parking. Copp Lane is divided into sections by the Downtown Biloxi Library and Civic Center. North-south streets within the district include Dukate Street, Bellman Street, Lee Street and Keller Avenue. These are all two-lane streets with on-street parking

The district is mainly comprised of residential buildings, ranging from high-style houses to modest cottages. The most common style and type is Craftsman Bungalow. Other common forms and styles in the district include Vernacular, Folk Victorian, and Queen Anne. Styles that are also represented, though in fewer numbers, are Colonial Revival, Free Classic, Gothic Revival, Neo Classical, Minimal Traditional, and Ranch.

The historic district is significant as a collection of late 19th and early 20th century residential architecture. It represents a neighborhood in the East Central part of Biloxi that is centered on East Howard Avenue and extends roughly from Downtown Biloxi on the west, to Holley Street on the east. The area has historically included a variety of residential building types including single family houses, duplexes, and apartment buildings. Commercial and industrial buildings have also been part of the neighborhood fabric.

The 1898 Sanborn map is the first to cover the area of the historic district. The map for that year shows residential development on East Howard Avenue between Nixon and Bellman, as well as on Copp Street and Peyton Drive. The population of the city grew from 3,234 in 1890 to 5,467 in 1900, an increase of about 67 percent. An increased demand for housing resulted, and spurred construction on East Howard, as well as in other parts of the city. Subsequent Sanborn Maps show that the neighborhood grew to the east along East Howard, extending north to the railroad tracks and south to the Keller Addition to Biloxi. Over 60 percent of the district's structures were built from 1900 to 1929, an era of economic prosperity and continued population growth.

Though East Howard Avenue had once been a popular place to live for middle- and upper-middle class families, new subdivisions started to draw them away in the 1920s. For those who could afford an automobile, it was no longer necessary to live near downtown Biloxi. The new developments were often located several miles from the city's center. Among these were Edgewater Park in West Biloxi, and Oak Park on the Back Bay, additions which were platted with protective covenants, some of which were similar to land use regulations. In 1940, the City of Biloxi adopted its first comprehensive zoning ordinance which classified the East Howard Avenue neighborhood as a combination of commercial and muti-family.

By World War II, when much of the Biloxi peninsula was experiencing a housing boom, the East Howard Avenue neighborhood was almost fully developed. The 1948 Sanborn map shows that some houses had been converted to duplexes or apartments, perhaps in response to the war time housing shortage. Also by 1948, several commercial uses had been added, including filling stations and stores, particularly on the east end of the neighborhood.

The buildings in the East Howard Street Historic District represent locally significant architectural forms and styles popular in Biloxi during the period of significance, 1880-1952, the construction dates for the oldest and most recent contributing buildings in the district.

The house at 657 East Howard Avenue, constructed c. 1880, illustrates an early vernacular form popular in Biloxi's residential architecture, the Creole Cottage. The Creole Cottage form which evolved by the mid-nineteenth century, is typified by its gable roof, undercut gallery and four-bay facade with doors in the two central bays. The form may have been influenced by Creole building practices in Louisiana since Biloxi and South Louisiana formed a culturally distinct zone separate from the Deep South.

The local vernacular building form known as the Biloxi Cottage is represented by twelve buildings. Notable examples include the Kornmann House at 609 Copp Street (1906) and the Boney House, 618 Copp Street (1884). Since the East Howard Street Historic District developed during the first thirty years of the 20th century which coincided with the popularity of the Biloxi Cottage form, it is not surprising that the form is well distributed through the district. The houses at 162 Lee Street (1910) and 164 Lee Street (c. 1910) are classic examples of the form. The Biloxi Cottage is generally characterized by a hip or gable-on-hip roof, which, on the facade, extends outward from the building to create an undercut gallery. The Biloxi Cottage features a four-bay facade, most often pierced with two central doorways, like the Creole Cottage. The form is found in other areas of the Gulf Coast, but is labeled the Biloxi Cottage because of the concentrated numbers found in the city. The plan of the hip-roofed form is generally four rooms, with four fireplaces opening from a central flue. The central chimney plan is not commonly found in the Deep South although there are precedents for the basic four-room plan. The Lombard House (1826) in New Orleans presents all the features of the Biloxi Cottage that developed seventy years later.

Vernacular and popular building types are distinguished from polite architecture in the history of Biloxi's architecture. According to The Buildings of Biloxi, "Polite architecture is the province of the architect and professional designer, who consciously begin a building with both function and aesthetics in mind, but also with an eye on national trends of style and technique."

In the East Howard Street Historic District, polite architecture primarily takes form in the Queen Anne style. The Queen Anne style was popular among Biloxi residents during the period dating from 1880 to 1910 and was promoted through the newspaper, plans, specifications and articles on architecture appearing frequently: "a Queen Anne Cottage was described and illustrated in 1893 as an ideal home for people of limited means, price to be about two thousand dollars."

The style is characterized by steeply pitched, irregularly-shaped roofs; variously sized single and grouped windows; a variety of decorative elements and siding types; and asymmetrical facades with partial or full-width porches. In the East Howard district, most examples are found on East Howard Avenue. The Bowen House, 555 East Howard Avenue (1900) was constructed of rusticated concrete block, "made from a mixture of oyster shell grit and cement, developed to take advantage of the numerous shells discarded by the canning industry." John F. Swetman, a meat market operator and tugboat owner, built the house at 567 East Howard Avenue in 1905. The detailing is described as "rich and exuberant although quite unacademic." The houses at 632 East Howard Avenue (1900) and 638 East Howard Avenue (1900) are recognized as two of the finest late Queen Anne houses in Biloxi, "notable for their porches and decorative woodwork."

The nationally popular architect-developed bungalow form is represented in the East Howard Historic District. In Biloxi, the form is characterized by a gable roof, usually perpendicular to the main facade, shallow roof pitch, gabled porches with wide overhangs and visible rafter ends, and "by 1920, this type with its Craftsman styling was a dominant form of new construction in Biloxi, not to be superseded for another twenty-five years." The Craftsman style began in California and spread throughout the United States through popular magazines.

Although not as common as the Craftsman-style house, there are four Ranch houses in the East Howard Historic District. The ranch house originated in southern California and became widely dispersed across the country after approved under FHA financing guidelines. With the growth of many southern and southwest cities following World War II, the ranch became "nearly ubiquitous" in those areas. The house at 140 Comfort Place (1950) is a good local example.