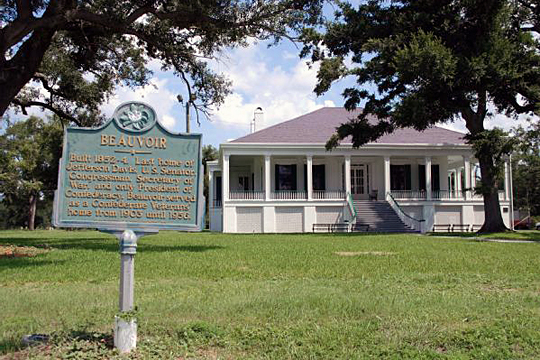 Biloxi, the first permanent white settlement in the Mississippi Valley, holds within its narrow streets and aged, provincial houses the charm of an Old World village that has turned to fishing and the entertainment of tourists. Confined to the low ridge of a narrow, finger-like peninsula, the city stretches long and lean between the Mississippi Sound on the south and the Bay of Biloxi on the north. Howard Avenue is its backbone. Lined with one and two story business structures, whose stuccoed exterior walls have mellowed to a soft cream color that is in keeping with the atmosphere of the narrow street, this main artery fuses the modernity of Beach Boulevard facing the sound with the age-heavy, older section along the bay. Here, in markets and drug and department stores, the native, a fisherman or boatbuilder of proud Castilian and venturesome Gallic antecedents, meets the stranger with that subtle acceptance of fact peculiar to Old World peoples.

Biloxi is but the fulfillment of what the Biloxi (Indian word for 'first people') knew would some day come to pass. Legendary with these Indians who once passed their time in the shade of the oaks on the shore of the bay that bears their name was the tale of white, godlike giants who, centuries before, had left their mounds as burial places on this shore and moved to the East. They were to remain in the East for a time, when they were to return to their mounds and to the shore where one had only to eat the fish and oysters and drink from Biloxi's healing springs to find contentment.

And the gods did "return," in 1682, when La Salle took possession of the Mississippi River in the name of the King of France, and 17 years later, when Pierre le Moyne, Sieur d'Iberville, dropped anchor at Ship Island and, after a preliminary exploration of the coast, decided on the Bay of Biloxi as the place for his settlement. A boulder and a cross mark the approximate spot where the company of Frenchmen first stepped from their boats to the mainland. From this first landing of Iberville, when Biloxi became the capital of a region including what is now Yellowstone Park, to the removal of the seat of government to New Orleans in 1723, the history of Biloxi is the history of the lower Mississippi River Valley. To Fort Maurepas, built on the eastern shore of the bay, came, in addition to the Biloxi, members of the Pascagoula, Pensacola, Chickasaw, and Choctaw tribes, rubbing their faces with white earth to honor Iberville and his brothers. Hardy voyageurs from Canada paddled down the Mississippi to settle in the newly opened province, bringing the strain of weathered frontier blood necessary for the founding of a permanent settlement. Chevalier Henry de Tonti and Fathers Davion and Montigny were among the more distinguished of the visitors who came from the river; and here Sauvolle, Tonti, and many knights of St. Louis lie buried where they died in the first years of the 18th century. Sauvolle, brother of Iberville, was stricken with yellow fever in August of 1701, and Tonti followed to the grave in 1704.

In 1702, because of a destructive fire, the administrative center of the colony was moved to Mobile Bay, and Dauphine Island became the harbor. In 1717, however, a typical Gulf hurricane choked the Dauphine harbor with sand, and Ship Island became again the principal anchorage for vessels from France. A fort was built on the island to protect the pass.

In 1719 headquarters were moved from Mobile back to Old Biloxi, and two years later across the bay to Fort Louis at New Biloxi, which remained the administrative center of the colony until Bienville procured its removal to New Orleans in 1723. But even after New Orleans had been established, ships from France continued to touch first at Ship Island. The progress of the colony during the first score of years after 1699 was characterized by an entire neglect of agricultural pursuits, and hard ships from famine and disease. The scum of France, convicts and adventurers of both sexes, was shipped as colonists, usually against their will. The occasional supplies from France, Santo Domingo, and Vera Cruz were so inadequate that the troops were quartered upon the Indian tribes. In 1718, after Crozat, the French banker, had failed in his grandiose schemes to strengthen the colony, the even more grandiose schemer, John Law, first great promoter of modern times, adopted the policy of making considerable concessions of land to wealthy and powerful personages who could introduce a specified number of settlers on the lands. Under this scheme, Negroes, Swiss, and Germans were brought to the colony; the Negroes as slaves, the Swiss and Germans as settlers. Exasperated by hunger, many of these immigrants rebelled in 1723 and attempted to reach the English settlements in the Carolinas. The hardy French Canadians survived, in many cases taking Indian wives.

France at last realized her mistake, and in order to "make a solid establishment," authorized a bishop to select the right sort of girls to become wives and establish homes. The bishop selected 80 girls who, though poor, were well reared and educated. Each was provided with a marriage outfit. They were put in charge of Sisters Gertrude, Louise, and Bergers, on board the ship La Saline, and landed at Ship Island, January 5, 1721. This was the third shipment of "Casket Girls." The last was sent to New Orleans, February 1728.

When the seat of government was moved to New Orleans in 1723, Biloxi slipped from the spotlight to spend a century in being shuttled back and forth like a pawn in the great chess game played by the Old World kings on the table of the New World. In 1763 the Gulf Coast country, including Biloxi, was ceded to Great Britain. Sometime between 1779 and 1781 it passed under Spanish rule. In 1810 Biloxi was a passive participant in the rebellion which ousted the Spaniards; and in 1811 its first Justice of the Peace, Jacques L Adner, took his commission from the emissary of the Government of the United States. It was in the 1840s that Biloxi, like Pass Christian, first became a favored summer watering place. In 1846 the editor of the Louisville, Kentucky Journal wrote to his wife from Biloxi a poem, entitled "To One Afar," in which was set forth the beauties of the sea breeze and bright flowers, the mocking bird's notes, the orange trees, and the blue waves of the Sound. This is among the first of the plethora of literary compliments paid to Biloxi, and foreshadowed the development of the town as a resort.

The War between the States left Biloxi comparatively unharmed. Ship Island was taken, lost, and retaken by the Union forces, and the main land was harassed by patrol boats from Fort Massachusetts, but no major engagements were fought near the town. Biloxians ran the blockade for food and supplies, giving basis for the anecdotes that preserve much of the war history of the town.

From the 1870s through the 1890s the social life of the village was centered at the seashore camp grounds of the Mississippi Methodists, where bonfires, built in sand boxes elevated on posts, furnished the light for night services.

For many years there were no roads on the beach front, the residents using sail and rowboats for getting about; and dependence on the water early led to the boatbuilding and racing for which Biloxi is noted. Biloxi built boats competed with boats from Pascagoula, Ocean Springs, Pass Christian, and Mississippi City, for trophies donated by the Howards (founders of the Louisiana Letter) , who made their home in Biloxi). After the war, however, the opening and paving of streets with crushed oyster shells was a major development. One erratic mayor, opposed by property owners, opened a beach road in front of their places on a day when he knew they would be in New Orleans; he also put a road through a cemetery at night, moving the graves to a new location. It is thought by some that he moved only the headstones, and that the bodies are still beneath the road.

In the 1890s the Montross Hotel (now the Riviera) on the corner of Beach and Lameuse Streets was the popular hotel. Reservations had to be made early in the season, as the people of wealth and fashion from Memphis, Chicago, Minneapolis, and other places gathered here. Accommodations, however, were poor, though full dress dinners and elegant card parties were held, enlivened by Negro cakewalks and spirituals. This period fixed Biloxi's reputation as a resort town, and the ensuing prosperity caused Biloxians to forget that Northerners were "Yankees."

The 1890s found the first winter tourists coming into this part of the Deep South. The real growth of Biloxi after the War between the States, however, was the direct result of development of the seafood packing business. The New Orleans & Mobile Railroad (later the Louisville & Nashville), built in 1869, gave the packers a needed outlet to northern markets. Oysters first were packed in ice and shipped in the shell; later they were opened and shipped in tubs. The first oyster packing plant, on Back Bay at Reynoir Street, was established in 1872. The canning of shrimp was pioneered in Biloxi in 1883 by Lopez, Elmer, and Gorenflo, seniors, names still prominent in the industry. Largely because of the fresh oyster and shrimp business the population of Biloxi jumped from 954 in 1870 to 5,467 in 1900. From 1900 to 1925 the developing factories imported seasonal labor from Baltimore, the majority of which was Polish. The slums on the Point in Biloxi are the camp houses constructed for these seasonal laborers. Since 1925 Acadian French from Louisiana and former sawmill hands from the dying lumber towns of southern Mississippi have furnished the necessary labor.