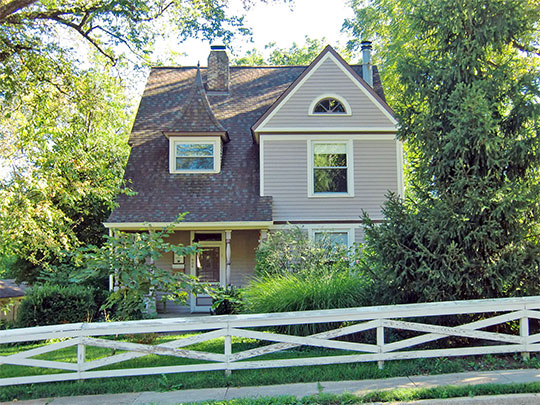 The Old Ferguson West Historic District was listed on the National Register of Historic Places in 2011. Portions of the content on this page were adapted from a copy of the original nomination document. [‡]

The Old Ferguson West Historic District developed primarily a residential neighborhood located west of Florissant Road in Ferguson, St. Louis County, Missouri. Ferguson is one of the oldest railroad suburbs in St. Louis County and is located 10 miles northwest of the City of St. Louis. The district extends south and west from the corner of Carson Road and Florissant Road, where the Ferguson Railroad Depot and the Wabash Railroad Viaduct are located-two visual elements that formed the northeast entrance to the neighborhood. Florissant Road developed as a farm-to-market road in St. Louis County in the early nineteenth century connecting the community of Florissant to the city of St. Louis and today is a major commercial corridor. Its intersection with the railroad line at the viaduct and depot defined the southwestern quadrant of the original city limits of Ferguson, of which the Old Ferguson West neighborhood is the oldest remaining residential neighborhood.

Old Ferguson West is a visually cohesive neighborhood easily distinguished from the surrounding areas by the major arteries that frame it. The district is roughly rectangular, 3 blocks wide and three streets deep, with an irregularly configured street grid. Carson Road forms the northern boundary and the houses on both sides of the stair-stepped Tiffin Avenue form the southern boundary. In the middle of the district there is one other major east-west street, Wesley Avenue. The district extends from the backs of the commercial properties on Florissant Road to the major residential artery, Harvey Avenue. There are two other north-south streets dividing up the neighborhood, Clark Avenue and Georgia Avenue.

The district is distinguished by a mixture of late-nineteenth and early to mid-twentieth century stylistic designs, or influences. In the late-nineteenth century this included Colonial Revival, Queen Anne and Folk Victorian styles. In the twentieth century the Craftsman Bungalows and Romantic Revivals were popular prior to World War II, especially the Tudor Revival and Colonial Revival variants (Georgian Revival and Dutch Colonial Revival, Cape Cod styles). House designs range from more modest cottages to larger, elaborate examples of each of these styles, providing a wide variety of designs, of which no two are identical. However, several examples obviously shared a common builder with nearly identical plans but slight variations on the detailing.

The progression of building construction was scattered throughout the entire neighborhood with only one or two buildings per block. As development continued, homes were built closer together, some larger parcels were subdivided, and some larger old buildings were physically broken into two, repositioned and rebuilt as two smaller homes (such as Tiffin Hall at 112 and 124 Tiffin). Development in any one area was not concentrated by date, except in a few of the small subdivisions (Miller Place and Raymar Place being the most notable examples), where homes were all built within a year or two of each other.

Most buildings were completed between 1867 and 1959. The neighborhood did have buildings constructed prior to 1867, such as the first depot, but these were later demolished and replaced. The oldest extant buildings date from 1867, which are the Ferguson Public School (110 S. Clark) and the house at 238 Wesley. In examining when each of the 180 principal buildings was finished, it became clear that the neighborhood initially grew slowly but steadily through the 1890s, with houses spaced one or two per block along the principal streets. There was a spike in home construction after 1900 coinciding with the arrival of the streetcar in Ferguson. In the first decade of the new century, 33 of the 180 principal buildings in the neighborhood were built, nearly 18 percent of the total. Construction slowed in the 1910s, especially during the last half of that decade when no new houses were built, but rose sharply during the 1920s, when 50 buildings were finished. This pace continued, barely curbed by the onset of the Great Depression in 1929. During the 1930s, 26 more homes and the new Ferguson Methodist Church were finished. Quite unusually, not only for metropolitan St. Louis but elsewhere in the nation, Old Ferguson West's development continued apparently unabated during the depth of the Depression in the mid-1930s. Only during World War II, when building materials were rationed, did construction stop in the neighborhood, resuming immediately at the end of the war, even though building materials were still in scarce supply. This was due to industrial development in north St. Louis County near Lambert Airport, especially the growth of McDonnell Aircraft (forerunner of McDonnell-Douglas, which became one of the nation's leading aerospace companies). Ferguson's connection to several transportation outlets, as well as its proximity to new industrial development in north St. Louis County, attracted new residents. The chart below shows that construction quickly picked up at the end of World War II, even before other areas of St. Louis' metropolitan area could find adequate building materials, filling in remaining empty lots, with 11 percent finished between 1945 and 1959.