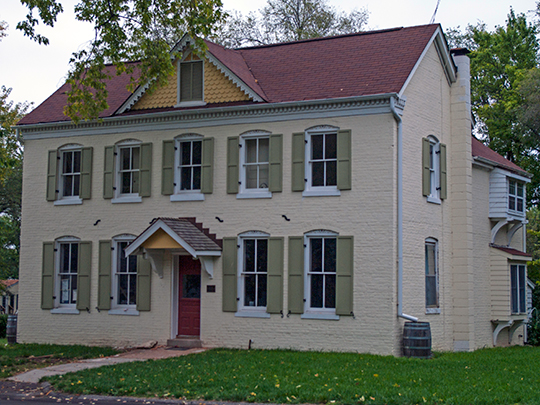 Florissant is a loosely knit village of small gray and white frame, and red brick houses surrounded by gardens, orchards and barns. Named Florissant (flowering) by its first French settlers, and called St. Ferdinand by Spanish authorities, the village was known as St. Ferdinand de Florissant until 1939 when it officially became Florissant. Most of the streets were named for either French or Spanish saints. The large German immigration during the 19th century is represented by the slim spire of the Sacred Heart Church at the crest of the slope. In the valley, prefaced by an avenue of giant elms, is the venerable, white-painted brick Church of St. Ferdinand, or, as it is more familiarly known, The French Church. Many of the inhabitants speak either French or German fluently.

Nicholas Herbert dit Le Compte is said to have "frequently been" on or near the site of Florissant as early as 1763; but a village did not develop until about 1785. From about 1786 until the territory was purchased by the United States in 1803, Francois Dunegant dit Beaurosier was civil and military commandant of the village. The settlement of 60 houses was occasionally menaced by Indians, and in 1793 the wife and sons of Antoine Riviere, Jr., were killed near the village. Twenty years later Father Dunand records that five of his parishioners were slain. Among the Creole residents of the village were Pierre Vial, who made an overland trek to Santa Fe in 1792, Joseph Robidoux, the founder of St. Joseph, Antoine Deshetres, who as "Tonish" of Washington Irving's Tour of the Prairies won a sort of comic immortality, and Auguste Archambault, Howard Stansbury's guide during his trip West in 1849-1850, and guide and butcher to General John C. Fremont.

The Church of St. Ferdinand at the west end of St. Francis Street is the oldest church dedicated to the Sacred Heart in the United States. The white brick building forms the center of a T-shaped group whose wings consist of the rectory and the Convent of the Sisters of Loretto. The cornerstone, which was presented to Father de la Croix by Mother Rose Philoppine Duchesne, was laid by him February 19, 1821; on November 21 of the same year, the church was blessed and opened for services. It was consecrated by Bishop Joseph Rosait, September 2, 1832. The present structure replaces an old log church erected on the site about 1788. The Rectory, a 2-1/2 story brick building with dormer windows, was built in 1819.

Early in 1823, two priests, seven novices, and other members of the Jesuit novitiate at White Marsh, Maryland, established themselves in 3 small log cabins on Bishop Du Borg's farm near Florissant, to complete their studies in preparation for missionary work among the Western Indian tribes.