Photo: Home in the Broadway Historic District, Rock Island City, IL. The Historic District was listed on the National Register of Historic Places in 1998. Photographed by User:Smallbones (own work), 2011, [cc-by-1.0 (creativecommons.org/publicdomain/zero/1.0/deed.en)], via Wikimedia Commons, accessed March, 2017. 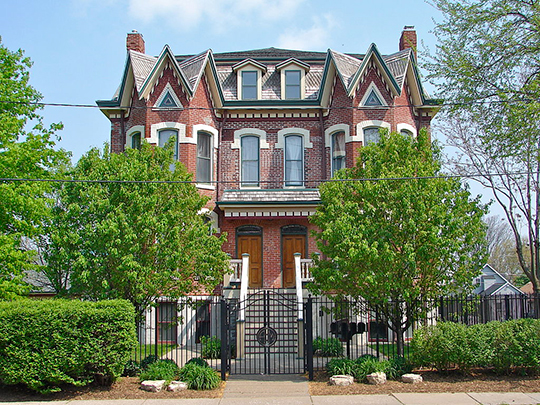 The Broadway Historic District [‡] was listed on the National Register of Historic Places in 1998.

The Broadway Historic District is a residential district generally located between Seventeenth and Twenty-third streets, Seventh Avenue, and Lincoln Court, Thirteenth and Twelfth avenues, with a small northern node extending north for two blocks along Twenty-third Street. The historic district is situated to the nearby south and east of the downtown commercial district and the Mississippi River and is surrounded on the east, west and south by other residential neighborhoods, although a small commercial area lies to the east along Twenty-fourth Street. The topography of the district is varied, with mainly flat areas to the north toward the river, and gradually rising slopes to the south and southeast.

The District consists mainly of single family housing, historic double houses and apartment buildings. Some of the houses have been converted to multi-family use, but retain their original single or two-family character. Outbuildings are located throughout the district and consist mostly of garages, both historic and modern, although a number of larger one-and-a-half or two story carriage barns survive. These outbuildings are located to the rear of the residential properties and are generally accessed via the alleyways that bisect most of the blocks in a north/south pattern.

Four properties, used at various times as churches, are located within the district, three of which are historic and are located along Seventh Avenue—one to the west between Eighteenth and Nineteenth streets and two to the east at the corners with Twenty-second and Twenty-third streets. The fourth religious property is a small, c. 1935 building located in the node, at Sixth Avenue. The Old Lincoln Grade School (vacant) is also within the district at 2125 Seventh Avenue and anchors the node to the remainder of the district.

A notable asset of the historic district is the mature landscaping, with large trees being prominent. Many of the houses which are located on slopes or higher grade elevations have historic stone or concrete block retaining walls; those that do not have gently sloping yards; retaining walls are also located along some alleys. The buildings all maintain a fairly generous and uniform setback from the sidewalk. A grassy city right-of-way between the sidewalk and the street is located on all streets and avenues except Lincoln Court and part of Seventeenth Street. All of the historic residential buildings have front yards. Some of the modern non-contributing buildings have parking lots in place of yards.

The contributing properties in the district date from c. 1854 to 1948, and represent a broad range of architectural styles and vernacular building types. Examples of the Greek Revival, Italianate, Romanesque Revival, Queen Anne, French Second Empire, Classical Revival, Colonial Revival, International, and various period revival styles are represented. Some buildings exhibit stylistic elements of two styles and should be considered transitional. Vernacular building types such as the Four Square, Side Hall plan, Gable Front, T-Plan, and L-Plan also occur within the district and in some instances have architectural elements which convey influences of an architectural style. By far the Queen Anne or transitional Queen Anne/Colonial Revival style is the predominant design represented in the district.

Most of the buildings within the district were originally built as single family dwellings and that use continues to dominate the district today. However, in some instances the houses have been converted to multi-family use as revealed by the presence of two or more mailboxes or utility meters; in some cases additional entry doors with fire escapes have been inserted. Nonetheless, most of the conversions have occurred in a fairly subtle manner and appear reversible. Historic double houses, two side-by-side mirror image units, are scattered throughout the district and blend into the single-family residential character of the area quite well. Of equal or slightly larger size and with similar architectural attributes as the single family dwellings, the double houses appear more as single-family houses joined together in the middle than a modern duplex and are quite distinguishable from two-flats.

Outbuildings make a significant contribution to the character of the area. Over 180 historic garages and carriage barns are scattered throughout the district, located mostly along the alleyways between block faces. Garages are the predominant historic outbuilding, although twelve carriage barns are also extant.

Four religious properties and a school are situated within the Broadway Historic District and all are located on or near the northern boundary of Seventh Avenue. Old Lincoln School (1893) is the only Romanesque Revival style building in the district. Although currently vacant, the building was historically the neighborhood school (a modern, active Lincoln School is to the west, but outside the district boundary) and relates both visually and culturally to the historic district. The oldest religious property, at 1804 Seventh Avenue, was originally a Greek Revival dwelling that has been converted to religious use; historic additions and remodels have also changed the building's original footprint. To the east is an Italianate style building that was also converted to religious use from its original residential function with an addition; it is currently being returned to a taxed single family residential and commercial use. Two opposing historic church buildings are at the opposite end of Seventh Avenue the Classical Revival First Church of Christ. Scientists (1914), now vacant, and the Gothic Revival Broadway Presbyterian Church (1876/1891). Like nearby Old Lincoln School, these two churches have historically served their parishioners who lived in the area. An altered c. 1935, church is sited in the two block Twenty-third Street node. Though non-contributing due to alterations, its low-scale and masonry exterior allow it to blend unobtrusively into the streetscape.

In modern days the neighborhood's Broadway Historic Area Association has had a significant impact on the continued success of the district. The strength, organization, and dedication of the neighborhood group has resulted in numerous successful rehabilitation projects and tours which have brought national attention to the neighborhood. The Association's innovative and active Great Unveiling program, which uses volunteer labor to remove synthetic siding from the neighborhood's historic houses, has in fact, contributed significantly to the district's much improved architectural integrity, making this nomination possible. The dominant Queen Anne and Queen Anne/Colonial Revival housing stock is now especially highlighted with typically varied wall treatments featuring multi-color paint schemes. The houses of the neighborhood are frequently the subject of About Your House with Bob Yapp, a regular program on PBS nationally, and sponsored by the National Trust for Historic Preservation. Yapp is a resident of the Broadway Historic District.

The historic district features a strong degree of historic integrity. Few modern buildings have been added to the neighborhood in its over one hundred years. Likewise, few vacant lots exist within the district boundaries. The combination of these two characteristics adds substantially to the sense of time and place conveyed by the historic district. The cohesiveness of the vast amount of late nineteenth and early twentieth century architecture has remained quite intact.

Real growth in what became the Broadway neighborhood began in the 1860s with additions platted by Webber, Mixter, Buford, Schnell, Spencer, Dart and others. The area's close proximity to the downtown made it the logical choice for residential growth. As convenience was the impetus to the neighborhood's development, the sections of Broadway which were closest to the downtown developed first. The families who were attracted to the Broadway area and the quality of the homes which were constructed attest to the attraction of the location; many of the neighborhood's homes were custom built for people who held professional and managerial occupations in downtown Rock Island. Among the neighborhood's residents were Dr. Samuel Plummer, a physician who served in the Civil War, who built two houses at 705 and 709 20th Street; Messrs. Young and McCombs, owners of a downtown department store of the same name, who built houses at 830 22nd Street and 842 19th Street respectively; and Leonard Drack, a local architect and designer of the Rock Island Public Library, who designed his own home at 836 22nd Street. Other families were involved in rail and river transportation, as well as industry, including the Buford family who built the company which later became the J.I. Case plant.

The north/south development of the neighborhood's homes generally reflects its phases of development. The more northern sections of the neighborhood (those closest to the downtown), 7th Avenue to 9th Avenue as well as the 500-600 blocks of 23rd Street, generally date from 1860 to 1880. Growth following that period was generally more random, but overall, houses south of 9th Avenue tend to date after the first growth period. During this later period, between 1880 and 1905, most of the neighborhood was developed, with virtually no space available for new construction; houses which were built after 1910 tend to be on smaller lots which may have been split off from larger lots. Occasionally, newer houses may have replaced earlier ones.

The post-Civil War years brought a period of economic growth and prosperity to Rock Island. This prosperity was matched with improvements in public amenities which effected the physical appearance of the city itself. In 1882, gas street lamps were replaced with electric lights. Within five years of Alexander Graham Bell's telephone in 1876, Rock Island's telephone subscribers totaled 100. Free daily mail delivery was offered to residents in 1888. Newly created police and fire departments had paid staff rather than volunteers. By 1893, a new ten-room hospital was ready to admit patients; a home for orphans opened a few years later. In 1901-02, thanks to a generous donation from Frederick Weyerhaeuser, the public library finally received a permanent home; the Rock Island Public Library, built at a cost not to exceed $60,000, was designed by Broadway resident Leonard Drack.

Naturally, this prosperity affected residential development within the city, particularly the areas to the southeast of the downtown. The convenient proximity to downtown Rock Island was especially appealing to merchants and businessmen, many of whom bought lots on the present 19th-23rd streets between 6th and 13th avenues, accounting for much of the Broadway neighborhood. The names of original owners include some of the city's earlier settlers and people who helped make the city prosperous. The residents of the Broadway neighborhood help to illustrate, to a degree, the history and development of the neighborhood as well. Among the earlier occupants of the neighborhood were Charles and Sophie Baumgaertel Hansgen, who had the house at 848 20th Street built in 1874. (The house was one of a number of the neighborhood's dwellings which were constructed by John Volk.) Charles Hansgen arrived in Rock Island in 1854, and worked for the Rock Island Railroad for about twelve years, eventually becoming a conductor. After running the Union Hotel for two years, he began a grocery business in either 1868 or 1870, from which he retired around the turn of the century. Both Charles and Sophie were German immigrants; they had nine children, some of whom were born in their house at 848 20th Street. Charles Hansgen's obituary in 1920 listed his address as 1931 9th Avenue (also within the Broadway neighborhood), but the house at 848 continued to remain in the family. Charles' and Sophie's son, William F. Hansgen, was born in the house on September 18, 1876 and died there on December 19, 1955; his wife Maude evidently lived in the house until her death in 1973.

The name "Broadway" comes from the original name of 23rd Street and a name which has been maintained by one of the historic district's contributing buildings, the Broadway Presbyterian Church, at 7th Avenue and 23rd Street (southwest corner). In 1876, a new name system for streets was implemented, creating the current numbered streets (north/south) and avenues (east/west) throughout the city. "Broadway" is the only historic street name from the previous system which remains in use in any form. In 1988, the neighborhood's Broadway Historic Area Association adopted the historic street name to perpetuate this neighborhood identity and to promote the preservation of the district's historic resources.