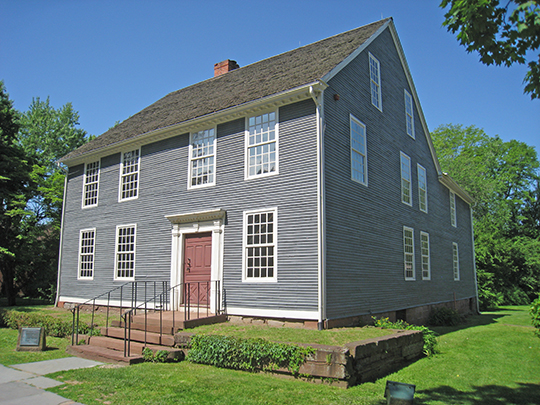 The Silas Deane House was listed on the National Register of Historic Places in 1970. Portions of the content on this web page were adapted from a copy of the original nomination document. [‡]

The Silas Deane House is a large frame two-story L-shaped dwelling with gable roof and two interior chimneys asymmetrically arranged. Built by Deane in 1766, its plan is believed to have been based on that of a Philadelphia townhouse. The Georgian structure is four-bays wide and two-bays deep (exclusive of the rear ell), has a simple exterior and elaborate interiors. The front (east) elevation is asymmetrical, with the entrance door located in the second bay from the right hand corner. A one-story porch which extended across the entire front of the house in the 18th century was removed early in the 20th century. The entrance door, crowned with a flat pediment, opens into a large stair hall. A fine stairway with elaborate balusters rises against the right or north wall. Behind the stair hall is the family room, to the left of the hall (in front) is the parlor and behind this, the library or office. Each of these three rooms has Portland marble mantels flanked by pilasters and their fireplace walls are fully paneled. Other walls are plastered, have wainscoting, and exposed corner posts. The floors are of wide boards. Upstairs there are four bedrooms in the main house and one more over the large kitchen in the rear ell. Three of the four bedrooms also have fully paneled fireplace walls.

The Silas Deane House was donated to the National Society of the Colonial Dames of America in the State of Connecticut in 1959 and the structure was carefully restored in 1963-65. Furnished as a historic house exhibit, the Silas Deane House is open to visitors. Its furnishings include some original Deane pieces as well as the original portraits of Silas Deane and his second wife.

The home of Silas Deane, from 1766 to 1783 was the first envoy abroad of the United States. As "commercial agent" of the Continental Congress, Silas Deane did important work in France from 1776 to 1778 in fitting out privateers, in securing military supplies and aid for the struggling colonies, and particularly in helping to create the machinery for later assistance.

Built by Silas Deane in 1766, the well-preserved house is little-altered.

Silas Deane was born in Groton, Connecticut, in 1737, the son of a blacksmith. After his graduation from Yale in 1758, he taught school and studied law. He was admitted to the bar in 1761 and the following year opened a law office in Wethersfield. In 1763 he married a wealthy widow who brought him six children and a prosperous store. After her death in 1767, Deane married into an aristocratic Connecticut family. Deane began his public career in 1769 as a chairman of a local committee to enforce a non-consumption agreement to help defeat the Townshend Acts. He was a member of the Connecticut General Assembly from 1772 to 1776 and of the Continental Congress from 1774 to January 1776. Just before leaving for Philadelphia in 1775, Deane, with two other Connecticut men, assumed the responsibility of sending the force under Ethan Allen and Benedict Arnold which resulted in the capture of Fort Ticonderoga.

On March 3, 1776, the Continental Congress selected Deane to go to France — the first American to represent the united colonies abroad. Deane was instructed to secure military and financial assistance, and to sound out the French government on the possibilities of an alliance. He landed in France on May 4, 1776. On May 2 the French King and his ministers had decided they could inflict the maximum damage on Great Britain with the minimum of risk and expense to France by encouraging the American rebels with secret shipments of sorely needed munitions, money, and supplies. Pierre Augustin Caron de Beaumarchais, working for the French government and with Silas Deane through the bogus private firm called the Roderique Hortalez et Compagnie, succeeded in sending eight ship-loads of military supplies, the first reaching Portsmouth, New Hampshire in March 1777. These reached the colonies in time to be of material, perhaps decisive, help in the Saratoga campaign of 1777. Ninety percent of the powder used by the colonials during the first 2-1/2 years of the war came from Europe — most of through Hortalex and Compagnie. Besides sending these supplies Deane commissioned and sent over a large number of European military officers, some of whom, especially Lafayette, De Kalb, von Steuben, and Pulaski, gave valuable help to the American cause. Along with these he sent many more of the merest soldiers of fortune, whose coming proved an embarrassment to the Congress.

On September 26, 1776, Congress appointed the first official commission to France. Comprised of Deane, Benjamin Franklin, and Arthur Lee of Virginia, they had all joined Deane in France by December 1776. Aided by the capture of Burgoyne's entire army at Saratoga on October 17, 1777, the American commissioners signed two treaties with France on February 6, 1778, one of commerce, the other providing for an offensive and defensive alliance. This was Deane's last work as a diplomatic representative.

Shortly after the treaties were signed, he learned that Congress had ordered him home, ostensibly to give information concerning the state of affairs in Europe. The real reason for his recall, as he himself suspected, lay in certain insinuations made against him by Arthur Lee. This erratic and probably mentally disturbed person professed to believe that all the supplies which Deane had secured in France were intended as gifts by the French government to the Americans, and that Dean and Beaumarchais, in asking Congress to pay for them, were planning merely to line their own pockets. Deane had responded so promptly to the order for his recall that before he left Europe he could not secure proper vouchers covering his financial transactions. Without these it was impossible to effect a settlement with Congress and Congress also refused to call him before them. After waiting two years, Deane returned to Europe hoping to speed up the auditing of his accounts there. Still finding it impossible to secure a settlement, smarting under a sense of injustice, poverty-stricken, and worn down by ill-health, Deane lost confidence in the American cause. In May and June 1781 Deane wrote a series of letters to friends in America, advising them to drop the War for Independence and to work for a reconciliation with England. They were reviewed and approved by Lord North and King George III in July and sent by North to Sir Henry Clinton in New York City as captured or "intercepted" letters. The first of the letters was printed in the New York loyalist press on October 24, 1781, five days after Cornwallis' surrender at Yorktown. These letters seemed to prove that he was a traitor as well as a rascal. Hated by the Americans and unrewarded by the British, Deane lived as an exile, financially bankrupt, and broken in health, for a short time in Ghent, and for a few years in England. On September 23, 1789, he died on shipboard, just outside Deal, England, as he was starting on a voyage to Canada. He was buried in an unmarked grave in the Deal churchyard.

Deane's services to the American cause from 1775 to 1778 were substantial, and his own losses were heavy. In 1842 Congress made partial restitution to his heirs, voting them the sum of $37,000, or about 10 cents on a dollar. At this time the original audit of his accounts, the one made under Arthur Lee's direction, was characterized as "ex parte, erroneous, and a gross injustice to Silas Deane." Carl Van Doren has written: "As it was then impossible to repay him what was due, so was it to punish him for the treachery about which Congress did not know."

Marica W. Carleton, Silas Deane, 1737-1789 (Booklet published by National Society of Colonial Dames of America in the State of Connecticut, 1971).