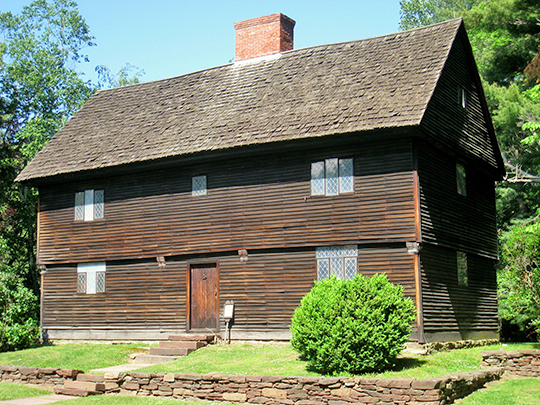 The Buttolph-Williams House was listed on the National Register of Historic Places in 1968 and was designated a National Historic Landmark in 1974. Portions of the content on this web page were adapted from the 1974 National Landmark nomination document. [‡]

The first settlement in Connecticut was not along the coast as we might expect, but far up the Connecticut River at Wethersfield, today a suburb of Hartford. Land was bought from the Indians in 1634 by a group of settlers from Boston calling themselves "The Adventurers," who were encouraged enough by the excellent farmland at the edge of a navigable waterway to persevere in the area despite Indian raids during the first few years.

Since Wethersfield prospered during the seventeenth and eighteenth centuries but failed to do so when the industrial age followed, the town is today one filled with handsome old houses representing the days before 1800. There are in fact over 100 such houses there. One of them, and the oldest remaining in the town, is the Buttolph-Williams House, at the junction of Broad and Marsh Streets, built in 1692. [Note: Although once thought to have been built between 1692 and 1698,[3] more recent research has dated its construction to c. 1711.] David Buttolph built it, he being only 24 years old at the time, the son of a well-to-do glover and riverboat trader, John Buttolph. As indicated by the inventories of John Buttolph, this was a family of above-average means, and the nature of the Buttolph-Williams House reflects their prosperity. [Note: After this 1976 nomination to the National Register, the house has since been thought to have been built by a local tavern keeper, Benjamin Belden.]

The two-room plan of the house around a central chimney represents that transitional phase of New England Architecture when the one-room plan with an end chimney was giving way to a slightly more ambitious plan with a second room beyond the chimney. It was oftentimes finished off with an ell at the back of the house, thereby completing the classic New England "saltbox" house.

The exterior of the Buttolph-Williams House presents its 2-1/2 storey rectangular shape broad to the street, that is, with its gable to the side. The steeply-pitched shingled roof is only one of a number of features which owe their derivation to English medieval building techniques. Most apparent of this group are the overhanging second storey and the over-hanging roof, as well as the massive chimney. Here, the upper storey overhangs the lower by only four inches, whereas many times it was much more of a difference. At the Buttolph-Williams House, this feature is really a hewn (or false) overhang, since it is not created by projecting girts as in a true overhang but rather by boldly corbelling, at the floor level of the upper storey, the posts which run from sill to plate. The transition between the two planes of the two-storey post is articulated by a carved bracket. The house with a true overhang does so by carving the projecting end of the separate upper-storey post, below the girt, into pendants. The false type of overhang used at the Buttolph-Williams House fell out of usage by the late eighteenth century, but long before that had dwindled down to an overhang of only an inch or so.

The narrow, riven, (split, not sawed) siding on the Buttolph-Williams House is entirely representative of seventeenth century New England weatherboarding, i.e. boards of oak about five inches in width, attached to studs with about a one inch overlap, leaving about a four inch "weather." These particular oak boards were installed during a 1947 restoration after the shape of original ones found at the back of the house. Pine had subsequently replaced most of the originals.

The house also had several changes by 1947 to its lighting, with sash windows replacing the seventeenth century casement windows. Reconstructions of the earliest window types were based upon measurements of distances between pegged studs in the timber frame, which suggested to the restorers whether single, double, or triple lights should be used at the various openings, and whether or not a transom would be historically accurate.

The interior of the Buttolph-Williams House enjoys the same meticulous attention to detailing given by the restoration group in 1947, as they did to the exterior. From the unusual winding stair in the front porch, to the parlor and kitchen on the ground floor with their massive chimneys and lintels, and the two chambers in the upper storey, the house shows us to a remarkable degree, the living arrangements of seventeenth century Wethersfield. This aura is enhanced greatly by the outstanding collection of furnishings and artifacts in the Buttolph-Williams House, including what is said to be the most completely furnished seventeenth century kitchen in New England.

In 1692, when David Buttolph inherited half of his father's lands, the lot upon which he built what we call The Buttolph-Williams House consisted of two acres. When the lot, "mansion house," and barn were sold to Robert Turner in 1698, it drew a price of 60 pounds. As may easily be seen from a sketch of Wethersfield before 1700, the land of Lt. John Buttolph extended from Broad Street west towards Meeting House Square, apparently abutting the square. That land which was part of the square has since been reclaimed for residential use in Rose Lane, and has been built upon. The holding of land around the Buttolph-Williams House by the Antiquarian and Landmarks Society [now Connecticut Landmarks] is close to the same size held in the seventeenth century. It is most reasonable then to make the boundary of this National Historic Landmark co-extensive with the holding of the Society.

The landmark property is bounded on the north by land owned by Mr. and Mrs. Raffala, on the west by the land of Jane Dunham, on the south by the land of Samuel and Ida Wax, and on the east by the curb on the west side of Broad and Marsh Streets. The environment within view of the Buttolph-Williams House is entirely residential, with a number of very early houses nearby which enhance the quiet, almost rustic, flavor of the Buttolph-Williams House itself. The house is superbly maintained by Connecticut Landmarks and is regularly open to the public.

The Buttolph-Williams House is the oldest remaining house in Wethersfield, the oldest settlement in Connecticut, and is an excellent, restored example of a seventeenth century New England house with a two-room plan. It illustrates a range of architectural features and details which characterize the essentially medieval manner of building of the early New England settlers. Two storeys of post and girt construction, the house, through such components as its compressed plan, its massive center chimney, its small casement windows, its massive hewn oak frame, its narrow riven oak clapboarding, and its carved brackets, provides us with an outstanding restored example of a widespread New England style house of the early colonial period.