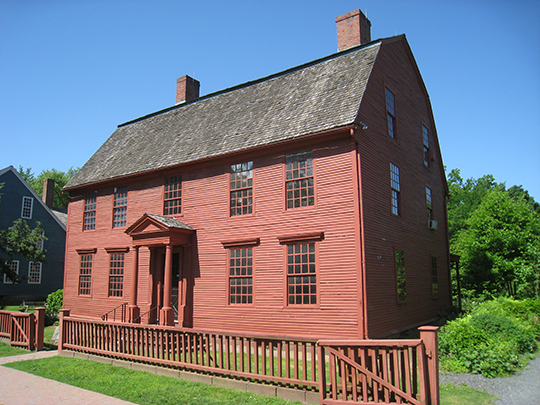 The Silas Deane House was listed on the National Register of Historic Places in 1966. It was listed as a National Historic Landmark in 1961. Portions of the content on this web page were adapted from a copy of the original 1975 Landmark Review document. [‡]

The main house, constructed by Joseph Webb, Sr., is a large five-bay, frame two-and-a-half story structure with a steep gambrel roof. The building's impression of height is increased by the graduation of its clapboards, which are very narrow at the bottom. The foundations are of brownstone and the simple but well-proportioned facade has only a narrow central pedimented porch, which is supported by two round Tuscan columns. The entrance is a Dutch divided door.

The house has the typical central hall floor plan for a Georgian residence with two interior chimneys. The floor of the hall is painted in the pattern of blocks, in imitation of marble, and a fine Georgian staircase leads to the second floor. Two rooms open off each side of the hall on both floors. To the left, on the first floor, are the south parlor and dining room and to the right, the north parlor and a chamber. The second floor has four bedrooms.

The paneling of the fireplace walls, on both the first and second floors, is excellent and typical of the period. The north parlor has arched cross-paneled doors flanking the fireplace and this is one of the finest examples of Georgian paneling in Connecticut. The south parlor, traditionally identified as the conference room used by General Washington and General Rochambeau in May, 1781, has been repaneled with slightly later paneling from another house.

The small frame two-story rear service ell, located at the southwest corner of the main house, was constructed by Major Samuel Wolcott, II in 1678 as a dwelling This wing still has over-hangs of 3 to 4 inches on its north and south side clapboarded walls and is one room deep.

The red flock wallpaper in the bedroom used by George Washington is a French import said to have been installed by Mrs. Webb in anticipation of the visit of her distinguished guest. Washington's use of the house was arranged by his private secretary, Samuel Webb, son of the owner.

The porch on the northwest rear of the house was added during Webb's occupancy. In the early twentieth century Wallace Nutting supplied paneling from another house for the south parlor. In 1915 he supervised restoration of the two and one-half story back brick wall and added the kitchen ell.

Fire stairs have been constructed in the rear section of the house in order to comply with modern safety regulations. They replaced an original back stairway. In the front first floor room the fireplaces have been closed. In 1957 a hyphen was added to connect the house with the woodshed, an early structure only a few feet south the of main house. In 1970 a one-room office was constructed west of the shed and connected to the ell.

This small office is invisible from the street, and is the work space for the group which administers the three house museums (Webb-Deane-Stevens Museum).

The house is in excellent condition and contains some priceless colonial pieces. The exterior will be painted red, the original color, and restoration of some interior rooms to the correct colonial shades is also planned. The house has been open to the public as a museum since 1919.

The Joseph Webb House is situated on a quiet tree-shaded street between two other eighteenth century frame houses, the Silas Deane House (also a national historic landmark) to the south, and the Isaac Stevens House to the north. All are owned and excellently maintained by the National Society of the Colonial Dames of America in the State of Connecticut, and their total property is nearly 8 acres, with long lawns and gardens running behind the houses.

The Joseph Webb House, specifically, is located on about one and one-half acres. Behind the house is a garden and an early white clapboard outhouse and a large weathered barn. Originally Joseph Webb's property was much more extensive and probably included the land on which the Deane and Stevens houses are located.

Erected in 1752, the Joseph Webb House is an excellent and little-altered example of the type of conservatively designed Late Georgian house that was widely utilized in colonial Connecticut. In May, 1781 this house was the scene of a five-day conference between General George Washington and Count de Rochambeau, the French commander in America, during which plans were begun which led to the Yorktown campaign.

In the spring of 1781, when the weight of active campaigning had shifted to Virginia and the Carolinas, Washington's army lay inactive in and about West Point. On May 22, Washington learned that a new French fleet was en route to the West Indies and, eventually, to the American coast to cooperate with Rochambeau's army in Newport. It was obvious that a combined offensive must be undertaken by the allies if the American cause was not to languish. Already war weariness had settled on the land and much of the Continental Army was scattered along the frontier and in the south.

Washington, fully aware of the gloomy prospect of Continental stalemate, determined to open an offensive in concert with Rochambeau. The old Connecticut town of Wethersfield, lying about half way between New Windsor on the Hudson River, where Washington was quartered, and Newport where Rochambeau was posted, was selected as the place of meeting. On May 19, Washington arrived at Wethersfield and in his own words "lodged ... at the house of Joseph Webb." Washington's diary for May 21 noted that the plan of campaign with Count de Rochambeau had been fixed. As a result of the conference Rochambeau brought his forces numbering almost 5,000 troops to join Washington in New York.

On August 14, Rochambeau heard from French Admiral de Grasse in the West Indies that the fleet, with a strong land force aboard, would sail for the Chesapeake where it would be available only until October 15. Washington acted quickly to take advantage of this substantial reinforcement, and de Grasse was notified that the French-American army would march south to cooperate with the fleet in cornering Cornwallis in Virginia.

Although it is too much to say that the conference in the Joseph Webb House laid the specific plans for the victorious Yorktown Campaign, it nevertheless marked the implementation of the Franco-American military alliance in terms of actual field operations, and had the effect of uniting the American and French armies in time for them to move south in conjunction with the arrival of the French fleet from the West Indies.

Connecticut — A Guide to its Roads, Lore and People (American Guide Series), Boston, 1938.