Photo: Houses in the Barnum/Palliser Historic District, Bridgeport, Connecticut. The historic district was listed on the National Register of Historic Places in 1982. Photographed by User:Magicpiano (own work), 2014, [cc-by-4.0 (creativecommons.org/licenses/by-sa/4.0/deed.en)], via Wikimedia Commons, accessed October, 2016. 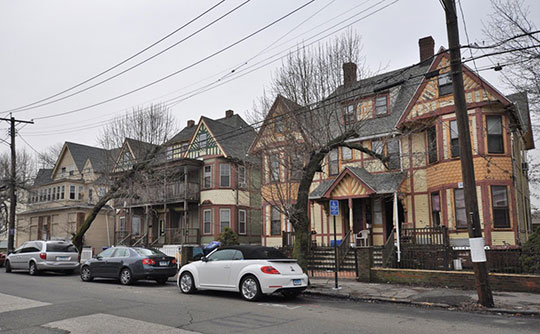 The Barnum-Palliser Development Historic District was listed on the National Register of Historic Places in 1982. Portions of the content on this web page were adapted from a copy of the original nomination document. [‡]

The Barnum-Palliser Development Historic District is a collection of 33 frame residential structures and a brick schoolhouse that comprise a working-class Victorian community in the South End of Bridgeport. The Barnum-Palliser Development Historic District is situated approximately one-quarter mile southwest of the city's downtown area, one-and-one half blocks south of the Connecticut Turnpike and three blocks north of Seaside at its closest point.

The majority of structures in the Barnum-Palliser Development Historic District (22) are of the double-house type, and of these all but one (the Keating House at 349-51 Gregory Street) were constructed as a planned development by the architectural firm of Palliser, Palliser & Company in the period 1882-1885. There is also a 4-unit block of row houses (374-84 Atlantic Street) and two single-family houses (276 Gregory Street and 341 Myrtle Avenue) that are also attributable to the firm.

Three of the Palliser buildings — 266-8 and 257-9 Gregory Street and 341 Myrtle Avenue — are built in the Italianate style with flat roofs, heavy mouldings, and other characteristics of this type. The remainder are in a style perhaps best termed "Eastlake," a Victorian Gothic style mingled with early Queen Anne, which employed Queen Anne massing, geometric detail, a linear arrangement of structural members, and decorative panels as highlights with incised sunflower, fan or sunburst motif. The Palliser buildings are all characterized by uniform setbacks, complimentary cornice heights, and overall massing, fenestration, porch design etc. that relates noticeably from house to house (e.g. the alternation of wide, massive houses with smaller, more vertical ones on the north side of Gregory Street or the heights of English basements and front gables on the south side of Gregory Street, which increase while ascending a small hill, giving the illusion of it being steeper than it actually is).

The other nine residential buildings are spread throughout the Barnum-Palliser Development Historic District are included for purposes of continuity. They are of either Italianate style (all constructed or remodeled in the decade of the 1870s) or Queen Anne (dating from the later 1880s and 1890s). Without exception they enhance the development houses by contributing to the enclosure of the blockfronts, and are compatible in terms of scale, architectural design, and degree of preservation of original fabric.

The streetscapes are fairly uniform in overall feeling but varied in individual architectural treatment. Perhaps the most homogenous portion of the Barnum-Palliser Development Historic District are six structures (95-7 Austin Street, 246-8 Gregory Street, and 373-7, 381-3, 389-93 and 399-401 Myrtle Avenue) which were built as rental property and owned outright by the Palliser Brothers. Also, three identical houses stand on the south side of Austin Street, but, as with the Myrtle Avenue houses, the repetition of the design is relieved by the punctuation of the contrasting designs which adjoin.

Overall, the Barnum-Palliser Development Historic District has been spared the worst jarring inroads of the twentieth century. The front of the Myrtle Avenue School was extended in 1916 in a design which respects the scale of the surrounding neighborhood. Small storefronts were constructed in houses at 373-7, 380-6 and 389-93 Myrtle Avenue, and the majority of district buildings have been covered over by various types of artificial siding. However, the recent exterior restoration of 381-3 and 389-93 Myrtle Avenue and 254-60 Gregory Street demonstrates the irreversibility of the application of this siding. The only major visual incursion to the integrity of the District is a one-story non-contributory warehouse of concrete block construction at 104 Austin Street.

The Barnum-Palliser Development Historic District is an urban-scaled neighborhood of innovatively designed working-class housing. It is associated with the real estate development aspect of the life of the important 19th century showman P.T. Barnum; is reflective of his relationship with and philanthropic attitude toward those of a less favored social class, an important late-19th century trend, and is primarily the work of the nationally-known architectural firm of Palliser, Palliser & Company. Of the four moderate income housing developments this Bridgeport-based firm is known to have been responsible for in that city,[1] this represents the only instance where the principals were actually owners of some of the properties, as well as the only such development which consists mostly of double houses. The work of another major architect, Warren R. Briggs, is also represented in the District in both earlier and later portions of the Myrtle Avenue School.

The land occupied by the Barnum-Palliser Development Historic District was purchased by Barnum in 1876 from the estate of Ezra Wheeler.[2] Development commenced at once in 1882 (the Bridgeport Standard reported "Very few people have a correct idea of the rapid improvement in the southern part of the city and of the numerous buildings now in progress below the railroad between Broad Street and Park Avenue, there being over fifty houses by actual count now in process of construction in that portion, all of which are of a good class, well built and designed..."[3]). Although the attribution of the majority of the District's buildings (all but the ones they themselves owned) to the Palliser firm remains circumstantial due to a lack of concrete evidence, the hand of a single master planner is at once apparent in the interrelationship of the buildings on these blocks. Barnum had employed the Pallisers extensively on his development of Cottage Street in the years between 1875 and 1882,[4] and his endorsement of their work appeared in at least one Palliser publication.[5] Perhaps the final word on the attribution is spoken eloquently by the designs published in Palliser's American Architecture (1878), to which the structures in the Barnum-Palliser Development Historic District have an unmistakable similarity.

According to City of Bridgeport Land Records, P.T. Barnum was the holder of mortgages on at least some of the properties. It is also possible that he may have subsidized the construction of the Palliser-owned buildings by giving the Palliser Brothers free land to spur other construction, a practice he is known to have employed in his development of East Bridgeport.[6] A South End resident himself, Barnum was an eager advocate of any project which would help effect the evolution of the integrated worker/industrialist community he envisioned.[7]

In styling, the double houses of the Barnum-Palliser Development Historic District were less bound to the dictums of a restricted budget than smaller single houses would have been. Their detailing could almost be considered opulent (the newspaper noted "These houses are odd in design and are very elaborate, both internally and externally...each house is painted in very striking colors entirely different from its neighbor"[8]), and these structures were sincere reflections of the aspirations of the Arts and Crafts Movement espoused by Charles Eastlake, William Morris and Oscar Wilde. Michael Tomlan, in his introduction to a compendium of the Pallisers' works,[9] wrote, "They were among the foremost disseminators of architectural designs of their time. Perhaps even more important (was) their desire to raise the level of popular taste and practical understanding of design." George and Charles Palliser's position at the forefront of late-19th century design practices is underscored by the sophisticated layout and decoration of these working-class houses.[10] They eloquently demonstrate Barnum's commitment to elevating the quality of the housing stock of his adopted city.

The publications of the Palliser firm as well as their position as the originators of the practice of "mail-order architecture" in America are perhaps too well known to necessitate an explanation in this text.[11] The Barnum-Palliser Development Historic District takes on added significance, however, when it is noted that both George and Charles Palliser lived in one of the development houses for several years before their removal to New York City (373-7 Myrtle Avenue) and that at least one of their understudies lived in an adjoining house.[12] The Pallisers, who ran widely-circulated advertisements which stated that they were "prepared to receive a limited number of suitable young men as students in practical architecture,"[13] had in their employ at one time or another such later renowned architects as Warren R. Briggs[14] and Walter F. Stickles.[15] Also, several of the development houses were first occupied by masons, plasterers and other tradesmen and contractors who may well have found employment on Palliser projects.[16]

The Barnum-Palliser Development Historic District is an example of an "artistic" architectural mode applied to a class of housing which most other architects ignored. It is an important chapter in the history of American architecture and its concern with the problem of housing workers in the growing 19th-century industrial cities.