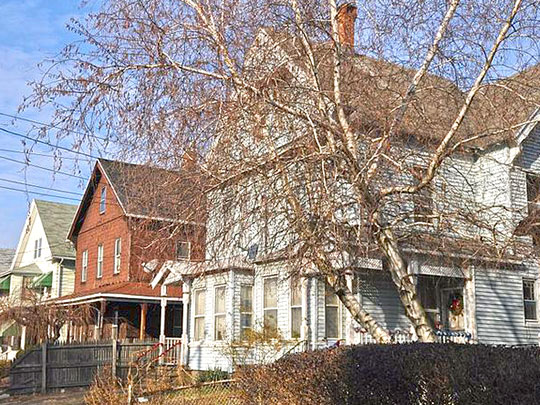 The Bassickville Historic District was listed on the National Register of Historic Places in 1987. Portions of the content on this web page were adapted from a copy of the original nomination document. [‡]

The Bassickville Historic District is located in the west end of the City of Bridgeport, one block north of the Amtrak railroad line and two blocks from U.S. Route 95. It includes most of the property laid out in 1883 for the rental housing development known as "Bassickville" between Fairfield Avenue on the north and State Street on the south, including Bassick Avenue in its entirety and the west side of Howard Avenue. A small district of little more than three acres, it contains 39 buildings (38 contributing and one non-contributing). Thirty-one of the contributing buildings are nearly identical single-family, Stick style cottages and two are double-family cottages of the same style, all built as rental housing between 1883 and 1885. The remaining five buildings include an early twentieth century Colonial Revival style duplex, a multi-family tenement, and a brick commercial block, composed of three buildings. One of the small cottages, 667 Howard Avenue, does not contribute to the district.

The wood-framed Bassickville cottages were designed to house one and two families. Single-family houses predominate that are one-and-one-half stories in height with cross-gable roofs, bay windows, and shed-roofed side porches. Although few houses have retained all their original architectural features, all of them, as constructed, displayed king-post trusses with pendant drops in the gable peaks, set off by board-and-batten siding or imbricated shingles, with panelled barge boards supported by simple scroll-shaped brackets at the eaves. Clapboard siding was used on the rest of the exterior walls, divided by vertical and horizontal trim boards in a typical Stick style fashion. The two-family duplexes were created by joining two single-family cottages, producing an extended facade with gables and porches at each end with a small porch in the center (729-35 Howard Avenue).

The similarity between the Bassickville cottages is readily apparent today despite the fact that some porches have been enclosed and many of the houses have been sheathed in artificial siding (asbestos or aluminum). Several of the cottages on Bassick Avenue are still in largely original condition. The original exterior fabric displayed on 52 Bassick Avenue includes the siding, the open porch, and panelled bargeboards. The integrity of this house can be confirmed by comparison with a reproduction of an 1888 photograph of a Bassickville cottage which appeared in the Scientific American that year. The house, 769 Howard Avenue, has had its porch enclosed. Other well-preserved cottages include 67, 73, 76, and 84 Bassick Avenue.

Demolition and later infill have altered the original appearance of the Bassickville development to some degree. Bassick Avenue has been the least affected, with demolition limited to one property at the south end on the west side. With the exception of the duplex at 57-59, a fairly compatible Colonial Revival style infill building in 1907 (on a lot that had been reserved in the original layout for access to the rear of the properties), the two sides of this street are mirror images, with all the small entry porches located on the south side. Of the four tenements built as part of this development on Fairfield Avenue, enlarged versions of the duplexes on Howard Avenue, only one remains (1521-23 Fairfield Avenue). Its neighbor to the east at the head of Howard Avenue was demolished as recently as 1980. Four cottages and one duplex were torn down on Howard Avenue, leaving five vacant lots between 675 and 727, a section excluded from the Bassickville Historic District. The single non-contributing property is located on the south end of this latter street (667 Howard Avenue). Inappropriate additions to the building have compromised its integrity.

The Bassickville Historic District is significant as a cohesive, generally well-preserved, late-nineteenth century housing development, composed primarily of vernacular Stick style cottages built between 1883 and 1885, which are representative examples of the working class housing produced in that period by technological advances in the building trades. A forerunner of the mass-produced housing of Bridgeport in the twentieth century, Bassickville is historically important as one of the first rental-housing developments in the city.

The architectural integrity of the Bassickville Historic District as a whole is exceptional, but is especially evident on Bassick Avenue. The repetition of the steeply pitched roofs gives this streetscape a pleasing uniformity and accentuates its nineteenth century character. Here also an exceptional number of houses have retained their original exterior fabric, mute testimony to the skill of the original builders and the care of the present-day owners.

Fully realized local interpretations of the Stick style, the Bassickville cottages resemble designs which appeared in the builders' books of the late nineteenth century, such as those published by W.T. Palliser of Bridgeport. Although there is no record of the use of a Palliser design, these buildings are typical of the genre. While the working class urban neighborhoods that were promoted by these publications and facilitated by the use of mass-produced millwork usually display more variety of form and style, as do the houses on the east side of Howard Avenue built after 1855 as private homes, the Bassickville cottages are typical examples for the period, a rare example of a nineteenth century rental housing development, possibly the earliest in Bridgeport.[1]

Bassickville was entirely planned and overseen by its founder Edmund C. Bassick, a wealthy businessman and real-estate entrepreneur from Chicago who moved to Bridgeport in 1880.[2] A farmer's son originally from Maine, Bassick went to sea at age 14. In 1851, following a voyage to Australia as second mate, he was the first to discover gold on that continent, precipitating the gold rush of the early fifties there. After 20 years prospecting in the American West, he owned some of the largest gold mines in the United States, especially the "Bassick" in Colorado, and had extensive holdings in coal lands.

Bassick recognized the potential for development in Bridgeport's west end, an area of scattered houses and farm land. After buying a house at the corner of State Street and Hancock Avenue, just west of the Bassickville Historic District, he bought up all the property between Howard and Hancock Avenues and laid out Bassick Avenue, a new street, for his development in 1883, bringing master carpenter I.W. Parker from Waldo, Maine, to supervise construction. Building houses in groups of 14 at a time, Bassick installed sidewalks, sewers, trees, and shrubs, even choosing the flowers for the front yards of the houses because of his lifelong interest in horticulture.[3] By March of 1883, he built the houses on the east side of Bassick and the west side of Howard Avenues. His brick commercial block on State Street, with stores and apartments, was also constructed that year. By 1885, the Bridgeport Standard reported that 400,000 board feet of lumber was used in the construction of 14 more houses on the west side of Bassick Avenue along with the four larger tenements on Fairfield Avenue. Bassickville was completed in March of 1885 with 70 tenements under the supervision of Bassick's son-in-law and leasing agent, Charles Fleming.

Rented out promptly to temperance advocates at $15 a month per family, the cottages were described as having three rooms on each floor "all wood-finished," with spacious closets.[4] Most of the original tenants on Bassick Avenue were employed locally in the building trades (sawyer, joiner, painter, stonecutter, or mason), or in Bridgeport industries, including four at the R.H. Wolfe Company, a wire mill, one as foreman. Two others were supervisors at the National Fertilizer Company and the Fairfield Chemical Works in Black Rock. Only two tenants held what today would be called white-collar jobs: one as a draftsman for an architect, the other as a clerk.[5]

To make room for the last group of cottages on the west side of Bassick Avenue, Bassick moved nearby to another house on Fairfield Avenue, the former home of P.T. Barnum, "Lindencroft." Before his death in 1898, his remaining undeveloped property through to Hancock Avenue and on lower State Street was utilized for his commercial nursery with ten greenhouses, specializing in flowers and some truck garden products. It was not until 1907 that any more development took place in this area. Additional lots were laid out for the construction of private homes on Butler Avenue, a new street between Bassick and Hancock, and on both sides of Hancock Avenue. The last remaining lot on the west side of Bassick Avenue was purchased at this time for the construction of the Colonial Revival style duplex, along with the extension to the commercial block on State Street.