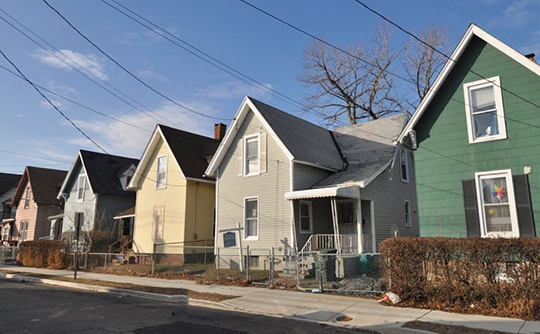 The William D. Bishop Cottage Development Historic District (also known as Cottage Park Historic District) was listed on the National Register of Historic Places in 1982. Portions of the content on this web page were adapted from a copy of the original nomination document. [1]

The William D. Bishop Cottage Development Historic District (also known as Cottage Park Historic District) is a 2-1/2-block residential district in the South End of Bridgeport, located 4 blocks south of the Connecticut Turnpike and Downtown and a half-block north of the entrance to Seaside Park at its closest point. It is surrounded by a mixed residential/industrial/university neighborhood. To the north is the Marina Village housing project, a brick 3-story complex of functionalist design (1941). The opposite side of Main Street, which forms the east boundary, is occupied by warehouses, vacant lots and small commercial establishments as well as a handful of isolated Victorian dwellings which do not relate to the development theme of this district. The south boundary excludes several vacant lots and a fast-food restaurant with its parking area which separates the William D. Bishop Cottage Development Historic District from Seaside Park. The west boundary is formed by Broad Street, across which are university and industrial parking lots and three widely-separated, non-relating Victorian houses.

Of primary interest is a collection of 35 small wood cottages (there were 36 originally), a planned workers' development of the Bishop Realty Company. These cottages, with only minor differences, are 1-1/2-story Carpenter's Gothic style structures, L-shaped, with front- and side-gable roofs. They can be divided into 2 categories — those erected in the spring of 1880 and those built in the summer of 1881.

The 1880 cottages line both sides of Atlantic Street. Unlike their later counterparts, the houses on this block display differing variants. The corner houses at both Main and Broad Streets have octagonal front bays, in contrast to the flat single-window fronts of the houses in between, and squared dining room bays on the sides facing the street. The cottage at the southwest corner of Atlantic and Main Streets, seemingly intended to be a "flagship" house of the community, has a square tower with a pyramided roof rising from the recesses between its front and side projections.

In other respects, however, these houses are very much alike. They have clapboarded walls with decorative board-and-batten pediments in the gables, extending slightly more than half-way down the length of the gable windows. Characteristically, there is a side entry porch with a roof that slopes to the front which is supported by a single square post ornamented by rounded brackets. In the side of the roof opposite the entry are two dormers, decorated with ornate bargeboards and board-and-batten pediments over the windows. The roof gables apparently once contained jig-saw frets of floral design highlighted by twin 8-pointed stars in the centers (currently extant on only 2 of the 12 cottages of this type).

The 1881 cottages face Broad, Main and Whiting Streets and Cottage Place. The only variant these contain is in the entry porch, the Cottage Place houses having a side-sloping roof supported by open half-timber work, with the others front-sloping with open spindly-work across the top. Generally speaking, they have one-story octagonal bays in front, board-and-batten sections above coupled second-story windows, and bowstring-arch decorations in the gables.

At the present time[1982] only one of the cottages has been demolished. Located at the northwest corner of Main Street and Cottage Place, it has been replaced by a non-contributory industrial structure, of cinder block construction faced with red brick, which is one-story high with a flat roof. Another cottage at 319 Main Street was raised up one floor and a restaurant inserted beneath in the early part of the twentieth century. The remainder of the original components have escaped major remodeling other than the application of various kinds of maintenance-free siding (on 22 out of 35 structures), porch enclosures, and removal of decorative wood trim.

Although it has not at this point been documented, the architects of the development were almost certainly the firm of Palliser, Palliser & Co. The designs are so similar as to be almost identical to plans published in their pattern books (particularly Plate V in Pallisers American Cottage Homes and Plate VI in Palliser's Model Homes). The Victorian Gothic architecture mingled with early Queen Anne detail is typical of the firms earlier (Bridgeport-based) work.

There are six additional buildings within, the William D. Bishop Cottage Development Historic District boundaries. The earliest of these, 225 Main Street, is a small 2-story end-gable Greek Revival house with a center entrance and central chimney. Despite the application of asbestos siding, it remains strongly suggestive of its period of origin with its light paint color, dark exterior blinds, and 6-over-6 pane window sash.

294-8 Broad Street is a 3-story Italianate duplex that dates from 1875. It is square and has a hip roof with a small front gable centered over the main entry.

A block of brick row houses, built circa 1882, stands at the southwest corner of the district. They are of eclectic design, combining elements of Victorian Gothic, Queen Anne and Romanesque styles in their facades. The block is composed of 6 units: 2 double bay-window-fronted units on either side of a flat-front double central pavilion, the central units perched slightly higher atop English basements. The facade of this block has been renovated with much of its original character restored by effect of polychromed paint color and cleaned brickwork.

An attribution to the Pallisers is also almost certain with this structure as well, as it combines many design elements (incised floral lintel decoration, chamfered mouldings, slate roofs peaked with glazed tile, etc.) common to their other row house commissions of this period.

The 2-family Queen Anne houses at 191 and 195-9 Main Street were built by 2 brothers in 1894 and 1888 respectively. They are similar in design, with front-gable roofs, central octagonal bays, and entry porticos on either side. At 317-21 Main Street is a late-19th century 4-unit apartment house with a storefront underneath. It is 3 stories high with a flat roof. A bracketed and dentillated cornice, double-window fenestration and paired octagonal bay windows are its distinguishing characteristics.

The William D. Bishop Cottage Development Historic District consists primarily of one of Bridgeport's first extensive tract developments, a community planned especially to provide an innovative housing scheme for lower-income workers. It can be said almost with certainty to be an important work of the Palliser Brothers, a Bridgeport architectural firm until 1882 which was instrumental in elevating the style of workingmen's architecture to a level equal to the mainstream of late-Victorian taste.

William Darius Bishop was an important figure in the developmental history of Bridgeport. He was the son of Alfred S. Bishop, builder of the Morris Canal, across New Jersey as well as the Housatonic Railroad between Bridgeport and Pittsfield, Massachusetts. William was a one-time Congressman from Fairfield County, served as president of both the Naugatuck and the York and New Haven Railroads, and was actively interested in the acquisition.and subdivision of real estate. His South End holdings were in an area considered at the time to be ideal for low-income housing — in close proximity to both factories and Seaside Park, which provided opportunities for recreation for those unable to afford carriages to escape the city, yet in an area where land prices were still relatively inexpensive.

The architectural partnership of George and Charles Palliser was probably of more wide-ranging importance than any other such firm in the city's history. Their national clientele is evidenced by examples used in their numerous pattern books from across the United States. Apparently buoyed by the success of their first development for P.T. Barnum and David W. Sherwood in the mid-1870s,[1] they became involved with various other members of the city's commercial and industrial elite in the erection of workers' housing. A cottage village very similar to Bishop's, for example, was built along Bassick Avenue in the West End for retired, gold miner Edmund C. Bassick in 1882-4.[2] It included a similar number of cottages, several 4-family frame tenements, and a block of brick row houses.

The probable Palliser row houses at 256-70 Broad Street are important as an element of an apparent major effort by the firm to acquaint Bridgeport with this type of urban architecture. Up to this time, the city's dwellings outside the fire zone were almost entirely of wood-frame, detached construction. Between 1880 and 1884 the Pallisers were responsible for a large number of these brick blocks in many sections of the city, usually built as income property for wealthy citizens who resided elsewhere. At least a dozen of these survive.[3] Apparently these blocks did not find favor in Bridgeport, and only a handful were constructed between the time of the Pallisers' departure and the beginning of the World War I housing boom. In fact, the original design concept for the Bishop Development as outlined in the Bridgeport Standard of 12 November 1880 called for "four or five" blocks of row housing with only 12 cottages — the popularity of the cottages would seem to have been the reason, for the alteration in plans.

Originally the cottages were named after tree species ("Elm Cottage," "Oak Cottage," etc.) rather than numbered, with signs over their entrances. The Bridgeport Standard of 22 May 1882 commented, "The idea is a very pretty one, and useful as well, as it enables a stranger to distinguish one from the other, a very important consideration when it is remembered that the cottages are almost exactly alike in outward appearance."

The original occupants of the Bishop Development were the German, Irish and rural New England workers who made up the bulk of the city's labor force at the time. A listing of Cottage Place residents gleaned from the Bridgeport City Directory of 1882 (see Appendix 1, Item 8 page 4) reveals that this development was the home in the 1880s of the noted inventor Charles F. Ritchel. Ritchel, a friend of Thomas Edison and an associate of P.T. Barnum, invented and flew a powered flying machine in 1878,[4] and was also responsible for the invention of such diverse objects as the roller skate, magnetic can opener and convex amusement park mirror.[5]

The Bishop Development was an early precursor of a concept which was to bring Bridgeport housing to national prominence in later years — that of the insular workers' village, an enclave of innovatively-designed, often identical housing units for the lower-income populace usually situated in the midst of an otherwise unplanned urban sprawl. Proceeded only by the Barnum-Sherwood Development (Division Street Historic District — 1874-9), this was to be further developed at Bassickville (1882-4) and Armstrong Place (located in the National Register listed East Bridgeport Historic District — 1884-6), and reached its culmination in terms of worldwide recognition in the developments of the Remington Arms Company (1915-16) and the Bridgeport Housing Company (1917-18).[6]