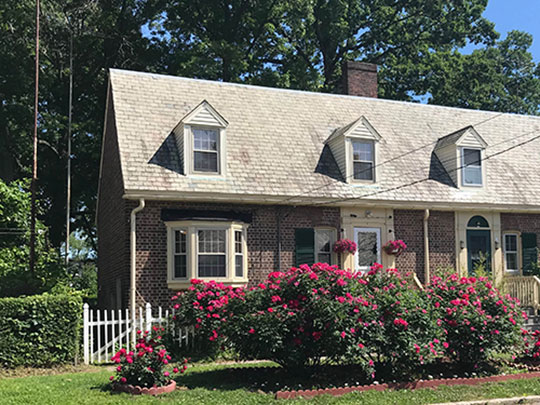 The Seaside Village Historic District [‡] was listed on the National Register of Historic Places in 1990.

Seaside Village is one of the housing complexes constructed by the Bridgeport Housing Company during World War I. Roughly two-thirds of the original project was built. It consists of 58 one-and-one-half and two-and-one-half-story structures containing some 200 single-family units arranged in rows and clusters that were designed and placed with reference to a carefully prepared, irregular site plan featuring slightly curved streets, cul-de-sacs, a small green or square, and spacious interior courts, yards, and gardens. The buildings are all of brick laid in an English bond pattern and are topped by slate-covered gable roofs. Small gable dormers surfaced with clapboards punctuate some of the roofs. They feature oriel windows, and some of the 6/6 windows topped by brick arches articulated by double header courses are flanked by wood shutters. The various classically inspired door surrounds range from full entablatures to open-bed pediments encompassing blind fanlights. The predominant order used is Tuscan Doric. While the steep pitches of the roofs represent an attempt to adapt an early eighteenth-century southern form to a northern climate, the careful massing of the buildings, their Colonial Revival design vocabulary, and studied placement along picturesque, tree-lined streets all consciously recall Old New England villages, where outbuildings and extensions have been added over time to the original houses.

Alterations to this complex are slight and are comprised of replacement jalousie sash in the bay windows and an occasional aluminum storm sash over existing wood sash. Some of the houses have small metal awnings that have obscured the entry detail but have not removed or destroyed any original detail.

The Seaside Village Historic District is located within a clearly defined neighborhood of Bridgeport outlined by the boundaries of the original land purchased by the United States Housing Corporation in 1918. Distinctive architectural features, including overall building design, slate gable roofs, and brick construction, identify the buildings associated with the United States Housing Corporation development. Landscape features, such as sidewalks, asymmetrical siting, and flowering trees, add cohesiveness to the Seaside Village Historic District. The edges of the district are bordered by nineteenth and twentieth-century residential and commercial construction.

Seaside Village Historic District, known as the Crane Development when built, is significant due to its direct association with the U.S. Housing Corporation's efforts to provide emergency housing for workers manning the factories of the city's war-related industries. It is a good example of the first government-subsidized housing built in Bridgeport. It survives with surprising architectural integrity as the last of four U.S. Housing Corporation projects in Bridgeport. It is a local legacy reflecting the high design quality and first national housing standards achieved through the earliest government-owned housing program in the United States. It is an excellent example of the collaborative works of R. Clipston Sturgis, Skinner and Walker, and planner Arthur Shurtleff, who created a well-conceived and well-executed model housing complex that maintains a distinct urban character incorporating middle-class housing tastes with English Garden City and American Garden Suburb tenets. As built, the complex presents a strong visual presence and prominence derived from a cohesive site plan, shared materials, and similar scale, proportion and design quality that set it apart from its immediate urban industrial context. It is also significant for its association with Bridgeport's most intense period of growth as housing for workers involved in defense work at the nearby Crane Company.