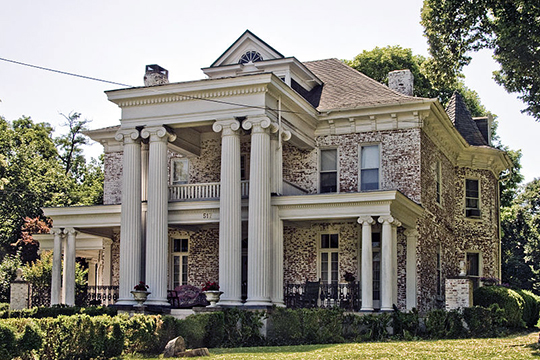 The Boydville Historic District was listed on the National Register of Historic Places in 1980. Portions of the content on this web page were adapted from a copy of the original nomination document. [‡] .

The Boydville Historic District is the affluent residential area of Martinsburg. Many of its architecturally/historically significant buildings were built, or became the homes of military, political and business leaders who served in the Federal, State, and local governments. It is significant as the site of the early 1778 Episcopal Church and Catholic Church (1825) and the cemetery (1802) which contains outstanding sculpture work. Also the burial site and monument of Gen. Adam Stephen, founder of Martinsburg, is located here. The area also contains the early 1883 architecturally/historically significant Public Graded School.

Located on the south side of originally platted Martinsburg, it was here that the Episcopal Church and cemetery were established in 1778. The church was used until the 1840s when the congregation moved to West King Street. Just across the street from the Episcopal Cemetery on West South Street the Catholics established a cemetery in 1802 and a church in 1825 which was used until the 1840s. Both cemeteries are surrounded by stone walls and have outstanding grave markers. The demure angel, life size, holding a wreath located near the Episcopal Cemetery entrance is an outstanding example. The cemeteries add a scenic view and space to the elegant mansions located east of the cemeteries in the 400 and 500 blocks of South Queen Street. The private Boydville Cemetery joins the Episcopal Cemetery on the south side. In the 600 block of S. Queen Street is "Boydville." Its spacious lawn with large trees extends almost the length of a block to the significant Georgian mansion. To the north adjoins the southern corner of the Episcopal Cemetery is the "law office," one of the outstanding dependencies of Boydville. On the west of the mansion is the original smokehouse, ice house, wash house and summer kitchen. The 1812 Boydville estate is already listed in the National Register. Known for its fine interior woodwork and original 1812 wallpaper in the hall, it has few equals in the state and nation. As Martinsburg grew and became more wealthy so did this area of the town.

The west side of the 400 block of S. Queen Street which originally contained the early 1795 home of Elisha Boyd and the home of General Adam Stephen's daughter acquired fine architecture or historically significant buildings including the 1883 Public High School, a beautiful High Victorian Gothic style building at 401 S. Queen Street, the 1880s brick Presbyterian Manse at 407 S. Queen Street, and the brick Alexander Parks, Jr. House at 409 S. Queen Street. Alexander Parks was a leading businessman of Martinsburg and built the large brick house. Other houses are the Sheriff McDonald Miller House at 413 S. Queen Street, a frame house with Palladian windows and elliptical windows and the Link Emmert House at 417 S. Queen Street, a very fine Queen Anne house which has wood sheathing and single covering various wall planes. Allen Emmert was associated with Emmert and Sons who ran a leading dry goods store in Martinsburg for over 50 years. On the east side of the 400 block is the Martin House at 418 S. Queen Street, one of the oldest homes on the street and the former home of Clarence E. Martin, born March 13, 1880 and began the practice of law in Martinsburg in 1901. Martin was president of the West Virginia Bar Association in 1924 and president of the American Bar Association in 1932-33. In 1927 he was named president of the American Catholic Historical Association.

All of the houses on the west side of the 500 block of S. Queen Street have spacious lawns which adds to the setting of the large mansion type house. The Crawford-Silver House at 501 S. Queen Street was built ca.1895 by W.H. Crawford, owner of the Crawford Woolen Mill who resided here before building 505 S. Queen Street. This fine late brick Victorian house with bay windows and a six sided tower on the corner became the home of Gray Silver who was elected to the West Virginia Senate in 1906 and re-elected in 1910. Silver was a dealer in wool, cattle and mules. Gray Silver has been considered the most important person in the Farm Bloc, a bipartisan group of 26 senators and 100 representatives who were congressional friends of farmers. Silver's political power in Congress in the 1920s was enormous.

W.H. Crawford who established the Crawford Woolen and other Mills in 1891 and President and developer of the Martinsburg Worsted and Cashmere Company built and resided at 505 S. Queen Street. The ca.1905 building is one of the finest architectural 20th century buildings in Martinsburg. The Neo-Classical Revival brick has Corinthian columns of a monumental order on stone pedestals. The balcony balustrade is turned with urn topped posts. The house is superior, palatial, flaunting of what money can buy in architecture. At 513 S. Queen Street is the Frank Emmert House, founder of Emmert and Sons, leading dry goods store in Martinsburg. The brick house is a handsome planned Queen Anne with pyramidal roof, bay windows, cross gables, and painted pentagonal caps top the dormers.

At 517 S. Queen Street on the edge of the original Boydville estate was the home of US Congressman George Meade Bowers. Originally built by the Faulkners in the last quarter of the 19th century the architecturally significant house was completely remodeled into a Neo-Classical Revival style by Congressman Bowers. The Ionic columns came from the Treasury Building in Washington, D.C. Bowers political career spans 40 years; from 1883 to 1887 he was a member of the West Virginia House of Delegates. In 1890 President Benjamin Harrison appointed him supervisor of the US Census for West Virginia. In 1892 he was Treasurer of the WV Board of World Fair Commissioners. In 1899 he was US Commissioner of Fisheries. Bowers was elected to the 64th Congress to fill a vacancy and re-elected to the 65th, 66th and 67th Congresses, serving from May 9, 1916 to March 3, 1923.

General Elisha Boyd, who built "Boydville" at 601 S. Queen Street, was a member of the Virginia House of Delegates in 1796-97 and was the Commonwealth's Attorney for Berkeley County from 1798-1838. During the War of 1812 he commanded the 4th Virginia Regiment. He was a member of the Constitutional Convention of 1829. He was elected as Brig. General by the General Assembly of Virginia in 1830.

Charles J. Faulkner, who married Mary Boyd, daughter of Elisha Boyd, resided at Boydville from 1840 until his death in 1884. In 1832 he was elected to the Virginia House of Delegates. In 1851-52 he was elected to the US House of Representatives. In 1859 he was appointed Minister to France by President Buchanan until 1861 when President Lincoln appointed his successor.

C.J. Faulkner II resided at 517 S. Queen Street when elected to the US Senate from West Virginia in 1882. He later acquired the Boydville mansion house. He served from 1882 to 1899 in the Senate.

The architecturally significant house at 604 S. Queen Street was also built by the Faulkners. It was built in the last quarter of the 19th century in the Queen Anne style.

On the west of the street at 506 and 510 S. Queen Street were homes of prominent Martinsburg and Berkeley County businessmen, W.D. Nicholas and X. Poole.

The Boydville Historic District has a concentration of the homes of prominent West Virginians which would be equaled by few in the State.