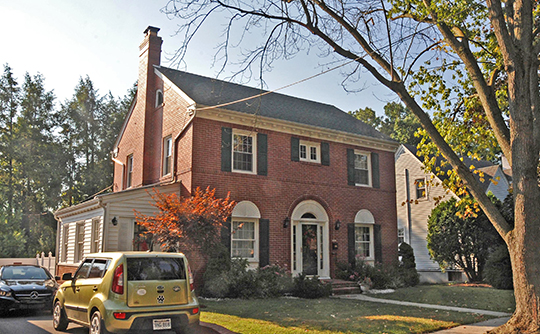 The West Martinsburg Historic District [‡] was listed on the National Register of Historic Places in 2010.

In 1730, the Governing Council of the Colony of Virginia issued orders for this section of the colony to be settled. Originally part of Spotsylvania County, a new county, Orange County, was formed in 1734, followed by Frederick County in 1738. Richard Beeson, a prosperous Quaker from Chester County, in southeastern Pennsylvania, acquired a tract of 3,000 acres in what would become part of Martinsburg. In 1743, Beeson divided a portion of his holdings among his children, and his son Edward, received the easternmost tract of the Beeson lands.

Berkeley County was formed from portions of Frederick County in 1772. Adam Stephen (1718-1791) became the county sheriff and commanded a division during the American Revolution. In 1773 he laid out Berkeley County's new county seat of government along Warm Springs Road, the overland route between Alexandria, Virginia and the town of Bath, now Berkeley Springs. Stephen christened his new town Martinsburg, after his friend Thomas Bryan Martin, a nephew of Lord Fairfax. Midway into the nineteenth century the railroad came to Martinsburg and Berkeley County's fortunes paralleled those of both the Cumberland Valley Railroad and the Baltimore and Ohio. Martinsburg became a thriving railroad town, bolstered by the development of the orchard industry which continues to the present.

Diverse other industries developed in the community as well, schools and churches were built, and new neighborhoods developed outward from Adam Stephen's original eighteenth-century settlement.

Much of the area in the boundary increase is part of the Second Plat "A" of the Rosemont Company's Addition to the City of Martinsburg. The plat for the neighborhood was prepared by surveyor George W. VanMetre and was recorded in 1912; it was revised and redrawn in 1915 by civil engineer Henry H. Hess. The Rosemont Company consisted of S.W. Walker, George M. Bowers and his son, George M. Bowers, Jr., M.L. Dorn, and W.S. Snyder. The Rosemont Development Company was named for "Rosemont," the substantial farmhouse built by Conrad Rousch on part of his 161-acre holdings which flanked the Hampshire Turnpike (later West King Street).

The Rosemont Company owned the land on the north side of West King Street as well as that on the south side (in the current Rosemont Historic District). The original plat for this area depicts a section laid out between West King Street, the west side of Tennessee Avenue, Park Avenue, and past Delaware Avenue.

This area developed during decades of significant growth in Martinsburg. As noted above, the railroad had arrived here in the 1840s, and the community's fortunes would be tied to transportation for generations. Significant industrial growth brought about the need for residential development, and the area included within the boundary increase grew in direct proportion to the growth of Martinsburg's industrial base.

Deeds set forth setback requirements, typically twenty-five feet, and also stipulated that no lot could be used for stone quarry purposes or for the transport of stone "or other quarry products." In an unfortunate sign of the times, deeds also provided that the neighborhood would be racially restricted, stating, "as part of the consideration herein, it is covenanted between the parties hereto that the said premises may not be sold to any person of African birth or descent for a period of fifty years and that this covenant shall run with the land."

VanMetre, George W. "Plat A, Rosemont Addition to the City of Martinsburg." Martinsburg, 1912.