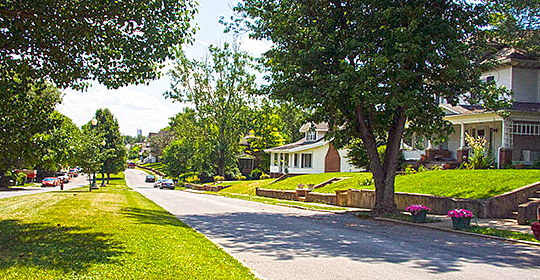 The Boyd Avenue Historic District was listed on the National Register of Historic Places in 2007. Portions of the content on this web page were adapted from a copy of the original nomination document. [‡] .

Martinsburg's Boyd Avenue Historic District is significant and meets National Register criterion for its reflection of the patterns of community planning and development in Martinsburg, for its architecture, and for its position as a strong, dense concentration of domestic architecture executed both according to vernacular building traditions and as reflections of the architectural styles popular throughout the period of significance. The period of significance begins c. 1750 with the construction of the earliest section of "Aspen Hall," a previously-listed property located at the northern edge of the district, and ends c.1952, corresponding to the date of construction of the most recently-constructed of the district's historic resources (363 Boyd Avenue and 351 Boyd Avenue, respectively).

In 1730, the Governing Council of the Colony of Virginia issued orders for this section of the colony to be settled. Originally part of Spottsylvania County, a new county, Orange County, was formed in 1734 , followed by Frederick County in 1738. Richard Beeson, a prosperous Quaker from Chester County, in southeastern Pennsylvania, acquired a tract of 3,000 acres in what would become part of Martinsburg. In 1743, Beeson divided a portion of his holdings among his children, and his son Edward, received the easternmost tract of the Beeson lands. Edward Beeson died two years later and his widow, Martha Mendenhall Beeson, and their children inherited his estate. Martha Beeson's brother, John Mendenhall, was a millwright who received a grant of one hundred acres adjoining his sister's land. It is thought that he erected a stone fort on the family holdings as part of a line of fortifications to protect the European settlers from Native American attack during the French and Indian War. George Washington wrote of the Mendenhall Fort in a 1757 communication to Col. William Fairfax, noting, "...the Patterson and Mendenhall small forts, lying under the North Mountain, are much exposed to the incursions of the enemy."[1] About 1750, Edward Beeson II erected the first section of the home that would become known as Aspen Hall.

Berkeley County was formed from portions of Frederick County in 1772. Adam Stephen (1718-1791) was the county sheriff and commanded a division during the American Revolution. In 1773 he laid out Berkeley County's new county seat of government along Warm Springs Road, the overland route between Alexandria, Virginia and the town of Bath, now Berkeley Springs. Stephen christened his new town Martinsburg, after his friend Thomas Bryan Martin, a nephew of Lord Fairfax. Midway into the nineteenth century the railroad came to Martinsburg and Berkeley County's fortunes paralleled those of both the Cumberland Valley Railroad and the Baltimore and Ohio. Martinsburg became a thriving railroad town, bolstered by the development of the orchard industry which continues to the present. Diverse other industries developed in the community as well, schools and churches were built, and new neighborhoods developed outward from Adam Stephen's original eighteenth-century settlement.

Edward Beeson II died in 1817 and Aspen Hall had passed from the Beeson family to Matthew Ranson in 1821. In the early 1840s, the B & O Railroad was built through a portion of the Ranson holdings north of the house, and in 1851, following Ranson's death, the property was acquired by John M. Stewart. During the Civil War the property was criss-crossed by both Union and Confederate forces, including the 106th New York Infantry, whose Col. Edward James, in a June, 1863 report, stated that he had bivouacked on Stewart's farm.[2] John M. Stewart was a highly successful businessman and at the time of his death in 1876 was reputed to be the wealthiest man in all of Berkeley County.

Hunter Holmes Boyd (1845-1923) was a member of a pioneer Berkeley County family, his grandfather, Elisha Boyd (1769-1841), having established the settlement known as Boydville, on Martinsburg's present-day South Queen Street. H.H. Boyd was a local real estate and insurance agent and in the late 1880s, as Martinsburg continued to grow and develop, he engaged surveyor J. Baker Kearfott to lay out a four-acre tract northwest of the center of town into a series of building lots. Boyd's tract was immediately south of John Stewart's Aspen Hall property. The lots on the new street sold well and by the time the 1907 Sanborn Fire Insurance Map for Martinsburg was published nearly every lot contained a house.[3]

Aspen Hall was still in the hands of the Stewart family when H.H. Boyd laid out his new street and residential neighborhood. In 1914, John W. Stewart, grandson of the first Stewart to own Aspen Hall, embarked on a project to create a new neighborhood adjacent to the eighteenth-century fort and house. Civil Engineer H.H. Hess platted thirty lots on either side of what was known as "Boyd Avenue Extension," including fourteen house lots on the west side, two lots at the northwest corner, and fourteen lots on the east side of the street. The deeds for the new neighborhood required that a uniform front-yard building setback of thirty feet be maintained, that homes be not less than two stories and no more than three stories in height, that the value of new homes in the neighborhood be a minimum of $2,500, and than only hedges, not fences, be between the houses and the sidewalk.

Like H.H. Boyd's Boyd Avenue neighborhood of a generation earlier, Park Hill proved to be a popular neighborhood and by the 1920s, Sanborn Fire Insurance Maps indicated that most of the lots in the new subdivision were occupied.[4]

With respect to National Register criterion, the Boyd Avenue Historic District is significant for its reflection of the pattern of early twentieth-century community planning, particularly as it relates to the Park Hill area. John Stewart's 1914 subdivision called for a carefully-planned neighborhood with a single street ending in a dead end, thus minimizing the passage of through traffic, even at that early date in automotive history. Further, Stewart recognized the importance of uniform setback requirements, with each lot requiring a setback of thirty feet. He also wished to assure that his new neighborhood would contain only substantial construction, requiring the minimum cost of $2,500, at a time when such a figure could build a commodious modern home. And finally, he designed his "new" Boyd Avenue as a boulevard, a reference back to the "Garden City" movement espoused by Ebenezer Howard a decade or more earlier, with neighborhoods more in touch with the landscape, even if that landscape was a twenty-foot wide planting strip between the opposing cartways.

The Boyd Avenue Historic District is significant for the presence in the district both of vernacular house types dating from the late nineteenth century and domestic architecture from the first six decades of the twentieth century. Styles represented include the Colonial Revival, Bungalow, Cape Cod, and American Foursquare.

The Boyd Avenue Historic District is distinct from the other districts in Martinsburg and Berkeley County. Other districts in the community were listed in the National Register as part of a 1980 Multiple Resource Area. Among these is Boydville Historic District, along South Queen Street, which also focused upon the Boyd family and is anchored by Elisha Boyd's home of the same name. In addition to Boyd's home this district includes other early mansion-scale residences of Martinsburg's nineteenth-century elite. The B & O Railroad and Related Industries Historic District is adjacent to the downtown and contains thematically-linked industrial properties. The Downtown Martinsburg Historic District is a commercial historic district containing governmental and commercial properties dating from the nineteenth and early twentieth century. The Green Hill Cemetery Historic District is, as its name implies, a district focused upon a historic community burying ground. The Boyd Avenue Historic District, on the other hand, is exclusively residential (unlike the B & O, Downtown, or Green Hill Districts), reflects primarily middle-class and upper-middle class domestic architecture (unlike Boydville and its associated district).

Summarizing, the Boyd Avenue Historic District reflects community planning and development in Martinsburg from the 1880s to the 1950s, including a previously-listed eighteenth-century home associated with the planning of a portion of the neighborhood and, coincidentally, incorporating a 1750s stone fort. The Boyd Avenue Historic District retains integrity in all of its component qualities, and contains examples drawn from many of the vernacular building traditions and architectural styles popular during much of its period of significance.