Photo: Homes in the 3200 block of Semmes Avenue, Woodland Heights Historic District, Richmond, VA. The Historic District was listed on the National Register of Historic Places in 2009. Photographed by User:Morgan Riley (own work), 2011, [cc-by-3.0 (creativecommons.org/licenses/by/3.0)], via Wikimedia Commons, accessed July, 2015. 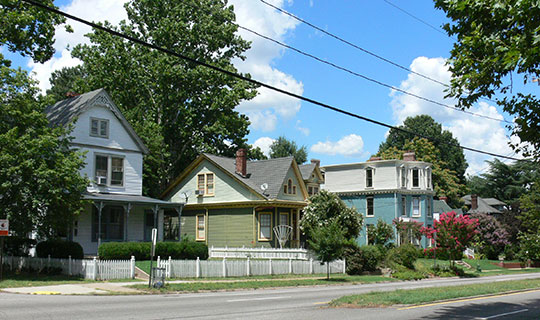 The Woodland Heights Historic District was listed on the National Register of Historic Places in 2009. Portions of the content of this web page were adapted from a copy of the original nomination document. [‡]

Woodland Heights is one of the earliest planned streetcar suburbs in Richmond. The boundaries of the neighborhood were established circa 1889 by the Southside Land & Improvement Company, organized in 1888 to develop the streetcar system and the planned residential neighborhood. The neighborhood is predominantly residential in character with two church buildings, one school, and a one-block stretch of small commercial buildings at the southwestern edge of the district. The area was surveyed as early as 1853. At that time, the area, then in the independent City of Manchester, was called Spring Hill. A gridiron plan superimposed upon the area shows the lack of sensitivity to the irregular terrain. The Richmond & Danville Railroad ran along the James River. By 1876, a few buildings were located in the area. The Southside Land & Improvement Company, created in 1889, marks the official beginning of Woodland Heights as a suburban neighborhood. In 1890, maps show the area with the gridiron street plan seen today. Forest Hill Park is also depicted on the maps, but it was then named Woodland Park. Chesterfield County tax maps call the area Woodland Heights in 1893, and show the present-day eighty-block subdivision plan. In Woodland Heights, approximately 13% of the houses were constructed by 1914; 37% by 1920; and 75% before 1933. Ninety percent of the historic building stock was achieved during the period of significance, 1880-1958.

The architectural character of Woodland Heights is synchronous with the nationally popular residential architectural styles around the turn of the twentieth century. The most common styles are the Folk Victorian, the Colonial Revival, and the Bungalow/Craftsman. Each architectural style has numerous variant expressions. The Victorian Queen Anne was the most popular style in America in the 1890s, and the Colonial Revival dominated American architecture in the first half the of the twentieth century. The majority of Bungalow/Craftsman dwellings were built in the years between World War I and II. During this period, more restrained and less ornamented examples of the Colonial Revival style were also erected. The district also contains a few well-integrated examples of Tudor Revival, Second Empire, Italianate, and Moderne architectural styles. The majority of single-family dwellings are two stories in height, ranging in size from approximately 1000 to 4000 square feet of finished living space. The architectural fabric is uniform in height, scale, massing, character, and setback. The latest houses to appear in the district were constructed during the post-World War II housing boom. Sprinkled unobtrusively among the older and mostly larger historic dwellings are modest Colonial Revival/Cape Cod and other small, one-story houses built between circa 1945 and 1958.Woodland Heights has not experienced any statistically significant construction in the past fifty years.

Woodland Heights is an urban neighborhood with public sidewalks with concrete curbs throughout the district. Large trees and mature vegetation are a prominent feature of most streets. The numbered streets, West 24th through West 34th, transverse from north to south, with even-numbered houses on the west side of the street and odd-numbered houses on the east side of the street. The named streets are Bainbridge Street, Chesterfield Street, Ferncliff Road, Forest Hill Avenue, Hillcrest Road, McDonough Street, New Kent Avenue, Perry Street, Porter Street, Riverside Drive, Semmes Avenue, Springhill Avenue, and Stonewall Avenue. These streets run from east to west, with the odd-numbered houses on the north side of the streets and the even-numbered houses on the south side of the streets. The typical dwelling is situated on a rectangular-shaped lot that extends from the city sidewalk to the rear alley. Nearly all of the dwellings have a walkway that divides the front yard and connects the dwelling to the city sidewalk. Each house is setback approximately thirty-five feet from the sidewalk with a shallow grassy area between the street and the sidewalk. Most houses have deep rear yards that are accessible from the public alleys that run parallel to the streets.

Designed and platted in 1889, Woodland Heights is one of the oldest streetcar suburbs in Richmond. The historic importance of Woodland Heights is linked to a singular nationally significant event. On May 4, 1888, Richmond, Virginia, made history when the world's first commercially successful electric street railway system commenced operation. Frank Julian Sprague, a graduate of the United States Naval Academy and a pioneer in the field of railway electrification, was responsible for producing the first viable electrified streetcar. "Sprague's success in Richmond began the most extraordinary revolution in transportation up to that time."15 This innovative event launched an era of speculative real estate development in the United States that was tied to the new technology. The Woodland Heights neighborhood was established by the Southside Land & Improvement Company, one among several companies chartered to operate streetcars as well as to design and develop the associated residential neighborhoods in Richmond. Mostly between circa 1880 and 1920, real estate investment companies bought tracts of farmland around the perimeter of the city's core and established recreational sites at the end of the trolley lines to attract potential home buyers from the city's growing middle and working-class population. The park-like ambiance of Woodland Heights along the south bank of the James River appealed to citizens who were dissatisfied with the quality of life in the densely populated city. The district is one of three residential suburban neighborhoods developed along the Forest Hill trolley car line.

The Woodland Heights Historic District retains the characteristics that made it a model of a late-nineteenth-century planned development. The neighborhood is one of the best-preserved collections of historic dwellings south of the James River. The historic grid plan survives largely intact from its inception in 1889. The houses are laid out in a regular grid to create a unified urban landscape. The grid plan is not unique to Woodland Heights. Rather, the design is typical of other streetcar suburbs in Richmond that were also developed during the period of significance.