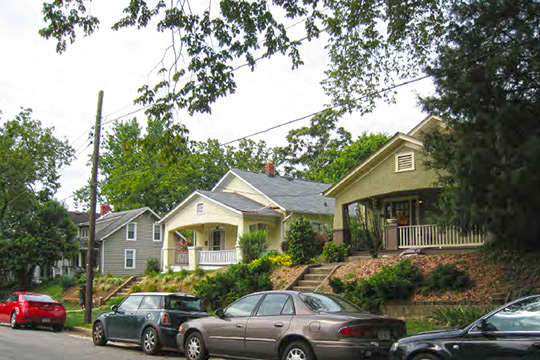 The Springhill Historic District was listed on the National Register of Historic Places in 2013. Portions of the content on this web page were adapted from a copy of the original nomination document. [‡]

Springhill is a compact residential neighborhood on the south side of the James River, approximately one mile from the central business district of the City of Richmond, Virginia. The district is bounded by Riverside Drive and Springhill Avenue on the north; the alley running parallel to Semmes Avenue on the south; the rear property line of the houses facing West 19th Street on the east, and West 22nd Street on the west. The buildings in the neighborhood are all residential, with most houses ranging in date from 1900 to 1930, and a smaller number of houses and three apartment buildings dating from the World War II period through about 1964. The majority of housing stock was initially occupied by professionals and laborers employed in industries south of the James River. About one-third of the houses were rental properties in 1920. The Craftsman and Colonial Revival architectural styles prevail with numerous houses representing either the Bungalow or American Foursquare sub-types. Two early-19th-century, waterworks-related structures and one site are within the boundaries. At the foot of West 22nd Street are the stone foundations of the Manchester Waterworks, commenced circa 1820 and enlarged circa 1878. An underground aqueduct and the site of a water-control tower, built between 1814 and 1820, are situated near the intersection of West 19th Street and Stonewall Avenue. A conceptual plan of the neighborhood was first published in 1848 when the area represented a small section of a larger planned town, Spring Hill. Legal plats depicting the present-day block-and-street-grid plan of the district were filed in Chesterfield County in 1862 and 1873.

The Springhill Historic District is associated with early-nineteenth-century industrial development on the south bank of the James River. The extant aqueduct, the site of the water-control tower, and the foundations of the Manchester Waterworks are associated with an important historic trend in the development of canal transportation and the origin of industrial and residential waterworks. Springhill, the earliest documented Streetcar Suburb in the greater Richmond metropolitan area, preserves locally significant examples of late-nineteenth century and early-twentieth-century domestic vernacular dwellings showcasing the design, building materials, and construction techniques characterizing a streetcar suburb. The district was part of Chesterfield County until 1873 when it became one of the first adjacent land areas to be legally annexed to the incorporated Town of Manchester. The residential expansion was tied to a boom in manufacturing, quarrying, and shipping in Manchester after the Civil War. A conceptual gridiron plan of Springhill was first published in 1848, part of a larger planned development called Spring Hill. Originally called Bellevue, Springhill represented a small section, the northeast corner, of a larger planned suburb called Spring Hill. The legal plat of the present-day neighborhood was initially filed in Chesterfield County in 1862 but development was suspended during the Civil War. In 1873, the Richmond & Manchester Railway & Improvement Company initiated horsecar service along the east boundary of Springhill and the Town of Manchester annexed the 40-acre Bellevue tract. Around the turn of the twentieth century, streetcar service improved with additional routes across the 9th Street Bridge to Main Street in downtown Richmond and to quarries located farther west along the Forest Hill street railway. As part of the Town of Manchester, Springhill was annexed to the City of Richmond in 1910. The neighborhood was largely built out by the early 1930s, but infill construction continued through the early 1960s.

The Springhill Historic District is situated on land contiguous to the seven-mile-stretch of the James River called "the Falls." Part of a 30,000-acre patent spanning both sides of the James River, Springhill was owned successively in the seventeenth and eighteenth centuries by the William Byrds I, II and III. In 1768, William Byrd III devised a land lottery to settle his debts. The subsequent ownership of the Springhill property is unclear until 1814 when William Bowden of Petersburg sold the property to George Winston, William Wardlaw, and William Bowden "with a view to future profit" and with "the intention of erecting buildings, constructing the machinery, preparing the apparatus, conducting the business, and in all things attending the completion and prosecution of their said undertaking." Each partner pledged to contribute one-third of the investment costs, with each sharing in one-third of the profits. The deed of purchase implies the financial backing of other investors because it stipulates that in the event of a dispute, "Arbitration will be accomplished, if need be, by John G. Smith; Thomas Rutherford; Edward Cunningham; Benjamin James Harris; Philip Haxall; Benjamin W. Coleman."

Between 1814 and 1818, the partners completed $4000 of improvements on the property, including the water-control tower (for the James River Manchester Canal below), the aqueduct, and a dwelling (probably present-day 618 West 20th Street). After a few years, the partnership faltered. In 1818, Bowden, Winston, and Wardlaw subdivided the property into three lots plus a separate 4.29-acre parcel bordering Canoe Run and another 11.5-acre tract bordering the James River. Wardlaw's Lot 1 (7.5 acres) was the easternmost parcel, bordering present-day Cowardin Avenue on the east. George Winston received Lot 2 (7.5 acres), in the middle, that encompassed the aqueduct, tower, and dwelling. Bowden received the westernmost lot (9.5 acres) and also paid an additional sum to acquire the Canoe Run parcel. The sub-divided property accounted for 29 acres. Although the deed specified a 40-acre tract, the river frontage was not included in the subdivision of lots. The plat that accompanied the deed showed an 11.74 acre rectangular lot along the James River, jointly-owned and most likely leased to the James River Manchester Canal Company.

In 1873, the City of Manchester annexed the 36-acre Springhill tract, the same year that horse car trolley service began operating along Cowardin Avenue. James J. Faran and John R. McLean, Washington, D.C. based real estate investors, re-filed the legal plat for Springhill at the Hustings Courthouse in Manchester. Between 1873 and 1890, the partners sold twelve lots. A sprinkling of houses was probably constructed during this period, but the Panic of 1873 triggered a severe economic depression that slowed economic growth in the United States for nearly a decade. Still, the population of Manchester and its suburbs doubled between 1870 and 1880. Late nineteenth-century census records show that most of the residents in the outlying suburbs were employed in nearby Manchester. Major employers included the Richmond & Danville Railroad, tobacco factories and warehouses, an iron foundry, and cotton and grain mills.

During the same period, between 1870 and 1890, John C. Robertson organized and operated the Southside Land & Improvement Company, acquiring most of the land encompassing Woodland Heights, Forest Hill and Westover Hills (the contiguous "sister" suburbs to Springhill). Robertson filed legal plats and secured the financing to create the suburban neighborhoods along the existing and expanding streetcar lines.

On June 7, 1890, Robertson purchased the Springhill property from Faran and McLean. The twelve lots previously sold were excluded from Robertson's purchase. The "tower and pump house lot "owned by the Manchester Water Company" was also excluded. That same day, to secure financing, Robertson mortgaged the property to Alexander T. Brittan and George E. Eramus for $45,000. This deed excluded 17 additional lots that were apparently held by Robertson for resale or development. Census reports and city directories show a rapid buildout in Springhill between 1900 and 1930, with forty-six houses constructed in that period.

The City of Richmond annexed Manchester, including the outlying Springhill neighborhood, in 1910, but not without some resistance from Southside residents. One issue was fear that water quality would not be maintained: "While the good citizens of Richmond at the turn of the century were disgustedly using water that resembled boarding-house coffee, their neighbors in the smaller city of Manchester were gloating over the clear fluid that flowed from their faucets ... the small, yet efficient water plant of old Manchester" was appreciated for the consistently pure water provided its citizens." The Manchester Waterworks was abandoned in 1914 when the City of Richmond opened a new twenty-inch water main from the reservoir in Byrd Park, across Belle Isle, to serve the Southside suburbs and Springhill and Manchester.