Photo: Home in the Dog Hill Architectural District, Clarksville, TN. The Historic District was listed on the National Register of Historic Places in 1980. Photographed by user:Sbugsyk (own work), 2012, [cc-by-3.0 (creativecommons.org/licenses/by/3.0)], via Wikimedia Commons, accessed January, 2016. 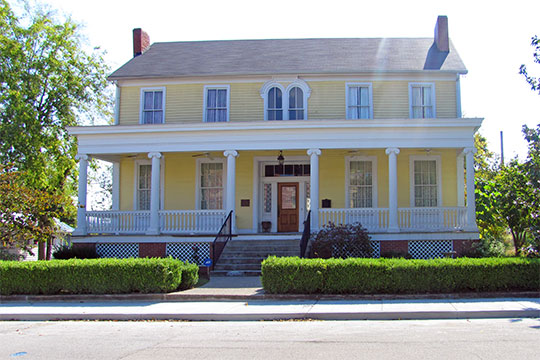 The Dog Hill Architectural District was listed on the National Register of Historic Places in 1980. Portions of the content of this web page were adapted from a copy of the original nomination document. [‡]

Dog Hill, one of the seven hills of Clarksville, is situated directly south of the downtown, which is also listed in the National Register as an architectural district, and east of the Cumberland River and a National Register industrial district. The industrial district is located at the lower slope and base of the west side of Dog Hill, near the river. Because of Dog Hill's commodious location, it developed as a residential area where doctors, merchants, bankers, and businessmen built homes within walking distance of the central business district on the outskirts of town. Most of the building took place in the period from 1870 to 1900 in the form of one to 2-1/2 story frame cottages which reflect influences of the Victorian Gothic, Italianate, Eastlake, and Second Empire styles. The buildings were constructed close to the streets and close to one another with very small front yards and long, narrow rear yards.

Much of the building on Dog Hill represents the influence of G. B. Wilson who came to Clarksville from Ohio in 1866 as an architect and proprietor of Sewanee Planing and Flooring Mills. He designed his home and others on Dog Hill as well as a number of Clarksville's finest Victorian residences for its most prominent citizens. Therefore, the prevailing architectural tastes in residential building during the era can be seen in a number of houses on Dog Hill. For example, Wilson's own home, built in the 1870s, illustrates the influence of the Victorian Gothic style in its steeply pitched gables, pointed and tudor arched windows, and vertical emphasis. As a wedding gift to his daughter, Wilson built the house next door in 1880. Both buildings have refined interiors with lavish woodwork and ornate marble and wood mantles. In addition, he built the two small cottages across the street, which are virtually identical, for his twin children. The gingerbread trim, fish scale gable decoration, and projecting boxed window bays with dentils and brackets of these buildings are features which decorate many of the buildings on Dog Hill.

As a collection, these buildings are a significant example of the types of residential architecture built by the working middle class in early urban neighborhoods. The buildings of Dog Hill remain basically unchanged in appearance since their construction and continue to be used as residences. As such, the Dog Hill neighborhood retains its integrity and survives to illustrate the distinctive architectural styles and craftsmanship employed by a prosperous urban working class near the turn of the century.