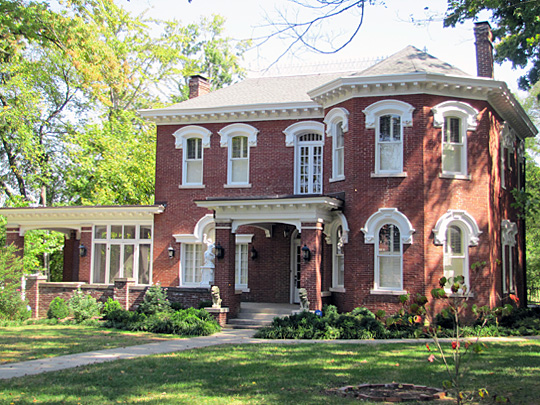 Clarksville, seat of Montgomery County, in a tobacco-growing district, is on a peninsula at the confluence of the Cumberland and Red Rivers. The town is built on seven hills. Facing the courthouse square are modern red brick business blocks side by side with gray brick and stone buildings of the 19th century. On the broad asphalted streets are the tracks of a former streetcar system. Many old homes of the antebellum period are on the banks of the rivers and on shaded avenues.

Although Moses Renfroe and a party of explorers came here in 1780, settlement was not made until 1784, when Colonel John Montgomery and Colonel Martin Armstrong filed papers for 200 acres in the vicinity. In the fall of that year two men platted a town and called it Clarksville for General George Rogers Clark, with whom Montgomery had fought in the Northwestern Campaign.

Clarksville grew slowly before the river bridges were built. For many years ferries were in use, the boats being propelled by a team of blind mules hitched to a heavy beam that, in turn, was attached to a wheel. Blind mules were preferred because they did not become dizzy while treading the endless circuit. Modern bridges now cross both rivers.

Cultivation of tobacco began with the first settlement, and Clarksville is now one of the leading dark-fired tobacco markets in the United States. Dark-fired tobacco is cured by fire, differing from the air-cured tobacco of other regions. First shipments of the crop went by flatboat to New Orleans for shipment to Europe, where it found quick and lasting favor.

Eleven loose-leaf tobacco sales floors and several tobacco-packing houses, a snuff factory, and a nicotine plant furnish outlets for the country's crop. Among other plants are a cannery, a creamery, a foundry and machine works, and numerous small garment factories. The Leaf Chronicle, a daily newspaper established in 1808, is one of the oldest periodicals in the State.