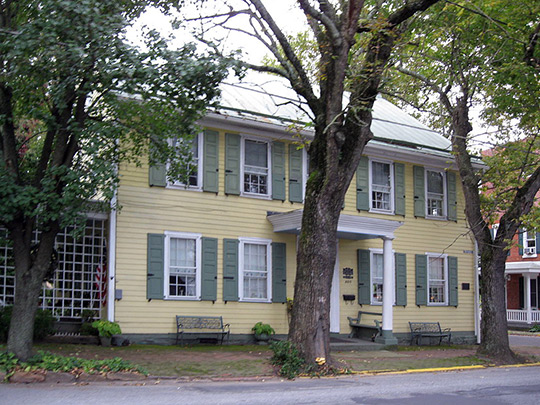 Schuylkill County was formed March 1, 1811, named for the Schuylkill River; was purchased from the Six Nations in 1749. George Godfried Orwig, first settler, in 1747, lived at Sculp Hill; he was followed by other Germans. Orwigsburg, first county seat, in 1811, was founded in 1796, by Peter Orwig, son of George; old courthouse still standing, is used as a factory; extensive views from here of mountains and agricultural valleys. In chain of frontier forts, were Franklin, built, 1756, by order of Benjamin Franklin; Fort Henry, south of Pine-grove; and Fort Lebanon, later known as Fort William, the most important, its site near Auburn, is marked by boulder with bronze tablet, inscription, "On this site stood Fort Lebanon, built, 1775, by Colonel Jacob Morgan, for protection of early settlers against Indians, erected in 1913 by Mahantongo Chapter, Daughters of the American Revolution, Pottsville, Pa." Indian warriors came down from the mountains and made savage forays on the peaceful farms, in which many people were massacred, and mills and houses were burned; the old oak tree is standing near, from which sentinels took observations; in this fort the first religious services in the county were held. One mile from Fort Lebanon is the old Red Church, built in 1755, destroyed by Indians, 1756, rebuilt, 1776, celebrated its sesquicentennial in 1905. This county revels in picturesque scenery; excellent roads curve through valleys of surpassing richness and fertility, or wander along a ridge with glorious views on either side; in the north, the-sky line of a mountain range is often broken by a weird coal breaker; in every direction there is beauty and interest. Laurel may be seen by the acre, and much rhododendron. Great cliffs of various colored conglomerate rock are found throughout the county.

This is the southern limit of the anthracite coal fields in east central Pennsylvania, the only ones of importance in the United States; divided into three well-known trade regions, Wyoming; Lehigh; and Schuylkill; comprising an area of 480 square miles, in the counties of Carbon, Columbia, Lackawanna, Northumberland, Luzerne, Susquehanna, and Schuylkill. Discovered in Schuylkill County by Nicho Allen in 1790; while camping out overnight, he built a fire among some rocks, under shelter of the trees; during the night, being awakened by unusual heat he saw the rocks a mass of glowing fire, he having ignited the outcrop of a bed of coal. The birth of this great productive industry may be dated from 1820, when 365 tons were sent to Philadelphia from the head waters of the Lehigh River. 80,000,000 tons per annum are now produced; location of coal was shown in William Scull's map of Pennsylvania published in 1770; three places marked. In 1795 it was used successfully for smithing by a blacksmith named Whitestone, but not generally for this purpose until 1806. In 1812, Colonel George Shoemaker produced coal from a shaft on land he owned, now known as the Centreville Tract; loaded nine wagons and drove to Philadelphia, where he was accused of being an impostor, attempting to sell stone for coal; he sold two loads for cost of transportation, and gave the rest away to those who promised to try to use it; he induced Messrs. Mellon & Bishop to try it in their rolling mill in Delaware County, where it was found to be a complete success; iron was heated in much less time than usual, and the workmen said, "It passed through the rolls like lead."

From 1830, rapid improvements were made in methods of mining and transporting coal. First breaker in this county was erected by Gideon Bast on Wolf Creek, near Minersville. The St. Clair shaft was sunk in 1845, by Alfred Lawton, to Primrose vein, 122 feet; in 1851, E. W. McGinness continued the depth of shaft to the Mammoth vein, 438 feet. At Wadesville a shaft was sunk 619' feet. A shaft located by General Henry Pleasants is deepest coal shaft in the United States, 1584 feet. The collieries of the Philadelphia & Reading Coal Company are the most extensive. Property in Schuylkill and Columbia counties 18,333 acres, one third coal, devised by Stephen Girard to the City of Philadelphia in trust, comprises some of the most valuable tracts in the anthracite region; Girard was largely instrumental in building the Schuylkill Canal to Philadelphia, connecting with this was a railroad and a series of gravity planes between Girardville and Mount Carbon, head of the canal; the Girard Railroad, opened in 1834, was one of the greatest engineering feats of the time, attracting international comment; much of the masonry is still to be seen.

In 1690, William Penn called attention to the feasibility of passage by water between the Susquehanna River and Tulpehocken Creek, a branch of the Schuylkill; in 1762 David Rittenhouse and Dr. William Smith surveyed a route for a canal, to connect waters of the Susquehanna and Schuylkill, via Swatara and Tulpehocken Creeks; and actually traced a line between the Delaware and Ohio Rivers at Fort Pitt, thence to Erie. The Union Canal connecting the Schuylkill and Susquehanna Rivers was completed in 1826 by the Schuylkill Navigation Company; they did great work in their day; years of greatest prosperity were from 1835-41.

In 1800, Reese & Thomas located an iron furnace on the site of Pottsville. In 1807 Greenwood furnace and forge were erected by John Pott. In 1839, Pioneer furnace at Pottsville, under Burd Patterson, was blown in with anthracite coal, by Benjamin Perry, and ran for about three months, among the first to use successfully anthracite coal in the blast furnace in United States. POTTSVILLE, county seat, 1395 feet above sea; population 21,876, laid out in 1816, has not one level street; flights of steps are frequently used to get to various heights; fine views from every point. A commission for city planning has lately been appointed.