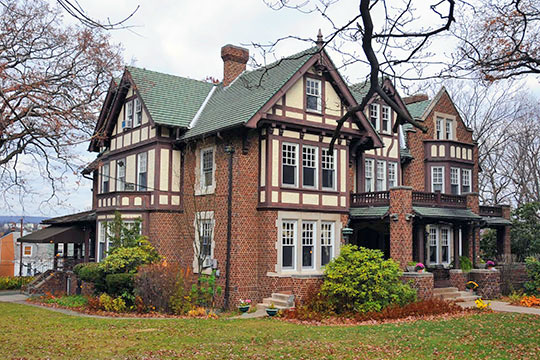 The Pottsville Historic District was listed on the National Register of Historic Places in 1982. Text below was selected and transcribed from a copy of the original nomination document.*

Situated in a central bowl that lies in the surrounding coal rich mountains, is the City of Pottsville. Conceived during the surge of financial coal speculation that occurred in the early 19th century, Pottsville became the vibrant heart of the southern Anthracite coal fields. Its early history reflects that of a boom mining town that eventually evolved into a stable large urban center. The sole reason for its inception and source for its growth was Anthracite. Being situated above the southern gaps of the Schuylkill River the city acted as the focal point for the shipment of coal to the growing iron industries that were spread along the Schuylkill River to the metropolis of Philadelphia. There, Anthracite from this region heated the homes and powered the whole region's industrial growth. In 1816 the City of Pottsville was laid out on the coal land of John Pott in a regular grid pattern, the district includes this. It was not until 1824 that the city grew from only approximately a dozen homes to over 532 buildings by 1831. During the following two decades Pottsville experienced unprecedented urban growth. Land speculations skyrocketed lot values on a weekly basis, in some cases $1,000 per week. The workshops and foundries of Pottsville were the hub of the engineering feats of the early mining industry of America, a fair portion of the mining technology used originated from these shops. The City was made of English, Welsh, German and Irish ethnic stock drawn from the coal fields of Europe. Merchants, bankers, and industrialists were drawn from Philadelphia, New York City, Reading and Lancaster to locate their business in this region of black gold. The social structure and forms of buildings built and conceived at Pottsville during this time were that of a sophisticated urban community. Its Centre Street was patterned after the great commerce street of Market Street in Philadelphia, so much so that Pottsville was called "Little Philadelphia." The first cast iron building in America was built here in 1830 by John DeHaviland (architect). A number of structures from the period of 1824-50 are still extant in the proposed district. The architectural forms used originated from many types established in Philadelphia during the 19th century. In fact, Pottsville quickly adopted new styles of architecture consistently till the 1930's making it a preserve of a cross section of the stylistic growth and adoptions of architectural forms and ideas for the north central portion of Pennsylvania. During the later 19th century the city experienced a broader corporate growth of coal and iron related industries. And it played a major role as one of the scenes of the early labor history of the U.S. during the embattled "Molly McGuire Era" of the 1870's -80's. Up until 1930 Pottsville was a small urban muscle of the great iron-coal industrial complex of the 19th and early 20th centuries. But the new use of oil for home heat along with the depression, overnight stopped the almost 100 year era of tremendous growth and building. The historic district contains:

2) The most significant portion of the earliest buildings extant in the city built prior to 1860.

3) A cross section of various architectural styles dating from the late Federal to Free Classic, Art Deco and Moderne period of the 1930's

4) The area, sites and remains of the early coal mining operations conducted in the southern Anthracite coal fields, dating as far back as 1784, and the relationatory institutional, commercial and vernacular buildings that were stimulated by the growth of the coal mining industry and established the identifiable core city.

The [historic] district is significant in that it still retains its dense urban character, and maintains a large resource of diverse architectural styles from over 100 years of growth from 1830-1930. It also contains one of the largest extant groupings of terra cotta Beaux-Arts, Free-Classic buildings in north central Pennsylvania. It is the purpose of this district to preserve and protect its urban environment and related cultural resources.