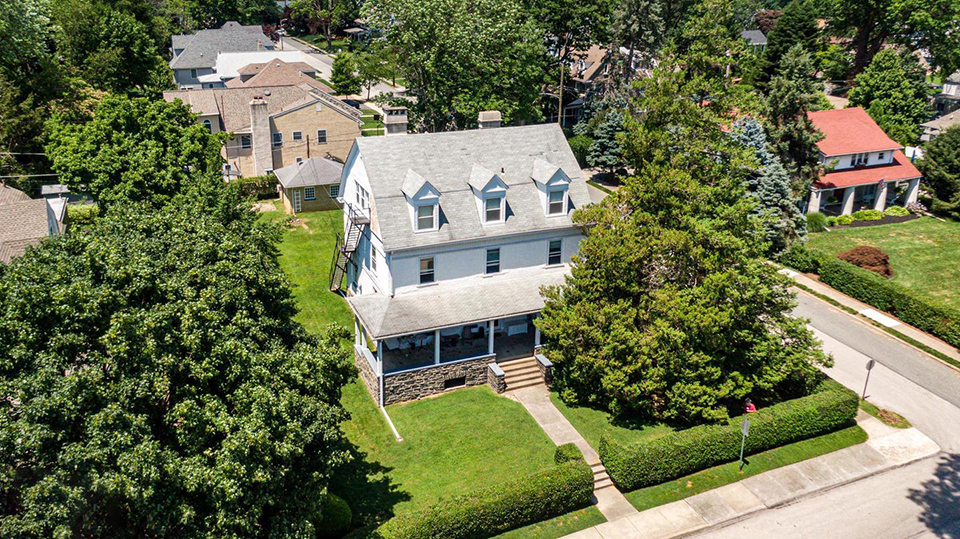 Haverford Township [†] lies in the northeastern section of Delaware County along the Montgomery County line. It was first formed as a municipality in 1684. The area we now call Haverford was part of a 40,000 acre grant from William Penn which Welsh Quakers had purchased in 1681. That portion of the original Welsh Tract grant lying within Delaware County comprises all of Haverford and Radnor Townships. The Welsh Quakers hoped to establish a separate barony in Penn's new colony and formed "Companies of Adventurers" with the most prominent person in each "company" taking out a patent for 5,000 acres of land as trustee. The first three families arrived in Haverford Township in 1682 with Lewis Davis, Henry Lewis, and William Howell selecting land along the southern border of the Township.

Haverford was primarily agricultural until the 20th century. Grain crops of wheat, oats, rye, and corn as well as garden and orchard produce were grown, and dairy cattle and livestock were raised. However, as is true for most of Delaware County, the area was very good for milling. Haverford Township is naturally endowed with numerous streams and runs. The two most prominent watersheds, Darby Creek and Cobbs Creek, provided excellent mill-seats for the early settlers. The mills varied in kind: grist, saw, lumber, fulling, tannery, woolen, and cotton.

The earliest recorded mill in the Township is on the eastern boundary of the Township along Cobbs Creek. There William Howell established a gristmill, the Haverford Mill, in 1685. This site was purchased by Daniel Humphreys in 1703. He added a sawmill and a fulling and dyeing mill soon after. These mills were eventually added to Dennis Kelly's holding in 1826 and became known as the Castle Hill Mills. The site is just north of Eagle Road on the west bank of Cobbs Creek. About 1800, Peter Brown erected grist and sawmills on the headwaters of Cobbs Creek. Jonathan Miller built grist and sawmills in 1810 at what would become the juncture of Mill Road and Karakung Drive;

On Darby Creek, the western boundary of the Township, Richard Hayes, Jr., David Morris, and Samuel Lewis erected a gristmill known as Haverford New Mill in 1707. Later a sawmill was added to the operation which continued in use until 1904. On Darby Creek near the border with Marple Township, Humphrey Ellis operated a very early fulling mill. In 1807, Henry Lawrence built a sawmill on this same site. His son, William Lawrence, constructed a gristmill close by in 1832. The Lawrence sawmill remained in the family and continually operated as a sawmill for over 125 years. It was the oldest extant industry in the Township until demolished in 1989 (see 045-HA-057).

The American Revolution demonstrated the need for black powder to be regularly produced in this country. In addition to military usage, there was a growing need for it in mining and engineering. To fill this need, Israel Whelen, Sr. constructed the Nitre Hall Powder Mills on Cobbs Creek, beginning operation in 1810. Between 1810 and 1840, these were the second largest powder mills in the U.S., with a total production of 800,000 lbs. in 1812. Nitre Hall mills ceased operation in 1840, when Dennis Kelly bought them and converted them to cotton and woolen mills as part of his Castle Hill Mills. The Howell and Humphreys mill holdings also purchased and added to the Castle Hill Mills. The Kelly mills provided material to the U.S. government from 1817 to 1860 with contracts ranging in value from $1,800 to $41,370.

Early roads provided a connecting link between the farms .and mills of the first settlers. Haverford Road, bisecting the Township north and south, is thought to have been laid out in 1683 but was officially opened in 1696. Darby Road was laid out in 1687. Mill Road (formerly Dickinson Mill Road) is one of the older roads. In 1792, the Philadelphia and Lancaster Turnpike (now U.S. Route 30) was begun, and soon after roads were built radiating from the Turnpike.

In the early 19th century, rail transportation systems began to develop in the Philadelphia region. These included the Haverford area where the Philadelphia and Columbia Railroad began operations in 1833. Callowhill and Broad Streets were.the starting point, with the line running all the way to Paoli and eventually reaching Pittsburgh by 1835. This new system opened the Township to land speculation and development. This was the first railway for general commerce in the U.S., but it offered little in the way of passenger service until the late 1860s. Pennsylvania Railroad bought the operation in 1857 and relocated the roadbed from what is now Railroad Avenue. Pennsylvania Railroad's new line would become the Main Line to the West.

This increase and improvement in transit lines in the second half of the 19th century provided the first steps toward suburbanization within the Township. The Philadelphia and West Chester Turnpike Company built the first toll road, then formed the Philadelphia and West Chester Traction Company, creating the first trolley line for the Township in 1898. 1902 saw the advent of the new Ardmore and Llanerch line, which encouraged new housing on adjacent tracts of land. Eventually, these rail and trolley lines would be consolidated under the Southeastern Pennsylvania Transportation Authority (SEPTA).

The population of Haverford Township almost tripled in the years from 1900 to 1920 as a result of these new transportation lines. Trolleys provided dependable transportation to Philadelphia, increasing the number of commuting workers. This created a demand for moderately priced homes on smaller lots. Several new communities were planned and built in the late 19th and early 20th centuries.

In 1877, the early subdivision of Millbrook belonging to Haydock Garrigues was laid out in the northeastern sector of the Township. By 1881, the Garrigues name had vanished from this tract, and a new subdivision called Preston (just above Millbrook) was in existence. By 1900, the first initial roads and housing were built in the area that would eventually become Llanerch. This growth continued through the first half of the 20th century. In 1909 the subdivisions of Llanerch, Llanerch Manor, Brookline, South Ardmore, Grassland, Penfield, Beechwood, Ardmore Park, and Hillcrest Lawns were platted. Hillcrest Lawns was the area that would eventually become Oakmont by 1925. Upland Park, Oakmont Park, Chatham Village, South Ardmore, and Merwood Park were created by 1946. Although these subdivisions still exist and their names are still used to identify neighborhoods, the Township has grown to the point where discernible boundaries no longer exist. Later generations are losing awareness of these distinctly separate, early subdivisions and their associated names.

During this same period, large country estates were being built by wealthy families on former farmland in the northern part of the Township. The new owners had farmhouses and dependencies torn down or remodeled as new mansions and gardens. The Grange and Millbrook are examples of conversions of early farmhouses into new estates.

The growth of suburbia and large estates reflected an increase of leisure time and led to the development of several golf courses. The Merion Cricket Club Golf Association incorporated Clifton Hall, an old farmhouse, into its clubhouse. There are 120 acres in the East Course, and 180 acres in the West Course. The Llanerch Country Club consists of 126 acres. These two clubs are still in existence. To the south of the Merion East Course is the area of Merion Golf Manor in which roads were named after famous golf courses such as Cedarbrook, Whitemarsh, Shawnee, Huntington, St. Davids, Overbrook, and Pine Valley.

Two other golf courses existed in the 1940s: the Brookline Country Club and the Pennsylvania Railroad Golf Club. The latter was established in 1925 on 109 acres, bounded by Earlington Road, Manoa Road, and City Line. The property was sold in 1943 to the Warner West Corporation, which developed Chatham Park. Brookline was sold off and developed as a subdivision ten years later. Part of its land was also used for the present-day Haverford Junior and Senior High Schools.

Another response to the improved transportation from the city of Philadelphia into the suburbs was the creation of Beechwood Park, a large amusement park which opened in May 1907, a few days after the opening of the Philadelphia and Western train line. However, the park never drew the crowds that were anticipated and consequently closed after only three seasons. Today, the only remnant of the park is the Beechwood Park station.

Education has always been an important aspect of life in Haverford Township. The first building erected for educational purposes was the Federal School in 1797. During the 1800s, four additional one-room schools and one parochial school were built. The latter part of the 19th century saw the formation of the present school system, with many schools designed and constructed for the Township in the early 20th century. After World War II, additions were made to existing schools, and a new high school and three one-story elementary schools were built. Today, there are one senior high school, a middle school, five elementary schools, four parochial schools, and two private schools in the Township.

Haverford College (1833), the first college founded by the Society of Friends in the United States, has several historic structures on its 225-acre property. The college renovated "Founder's Hall" . The Pennsylvania Historical and Museum Commission (PHMC) determined that the entire complex was eligible for the National Register as an historic district.

The Township today is primarily residential. According to the 1990 census, there were a total of 18,217 structures in Haverford. Of those, 6,237 or 34% were built in 1939 or earlier. These homes are a mix of residential structures with single homes, twins, and some row housing. Many of the streets are pleasantly tree-lined, creating homogeneous neighborhoods. There are retail and service businesses with some light industry, the largest being the Philadelphia Chewing Gum Corporation. There are two shopping centers, Manoa with 28 businesses and Pilgrim Gardens with about 12. Numerous smaller businesses and shops are located throughout the Township. The tallest buildings in the Township are two, five-story apartment buildings. There are 237 acres of park, playground, and recreational land along with 32.6 acres of Cobbs Creek Park owned by Philadelphia.