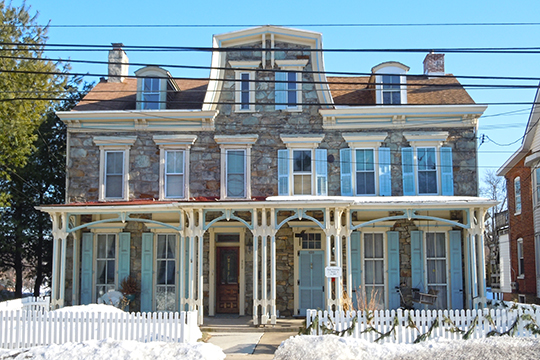 Downingtown's East Lancaster Avenue Historic District was listed on the National Register of Historic Places in 1979. Portions of the content on this web page were adapted from a copy of the original nomination document submitted to the National Park Service.

East Lancaster Avenue extends from the bank of the Brandywine Creek to the eastern boundary of the borough. The elongated shallow French curve street divides the eastern half of the town for 1.1 miles. The primary architectural styles found are Georgian, Federal, Conservative Italianate Villas, Conservative Queen Anne, and Bungalow.

Except for the Downingtown Log House and two Georgian homes (one has been torn down), the area near the Brandywine Creek was industrial in the 1700's. The 100 and 200 blocks developed in a commercial area using Italianate Villa architectural style prior to and after the Civil War and partially overflowed into the industrial section. The latter part of the 200 block was industrial in the 1700's and converted into commercial enterprises in the 1800's and 1900's. The 300 block of East Lancaster Avenue has a few Georgian and Federal buildings, but remained open space until the latter part of the 1800's. After the land was divided into lots, Conservation Queen Anne, Second Empire, Italianate Villa, and Gothic Revival architecture was used for the residences.

The George Washington Inn at the beginning of the 500 block was the nucleus of commercial development in the 18th century village which spread into the 400 block. The numerous Georgian and Federal structures have been documented as housing the following establishments: furniture, saddleshop, printing, shoe repair, cigar, bank, tables, variety and millinery. Gradually the structures were converted into fine homes as commercialism proliferated in the 200 block.

The remainder of the 500 block and all of the 600 block was still open farmland in the John Taylor Farm until the latter part of the 1800's and early 1900's. The architectural styles found in this section are Conservative Queen Anne, Early Bungalow, Jacobean Revival, and Colonial Revival. However, the 700 block once again was an earlier section of the village with the Downingtown Friends Meeting circa 1806, as the center. Conservative Georgian architecture is the most prominent architecture with 1900's additions of the same styles as the 600 block.

The oldest structure, the Downingtown Log House, circa 1700, was built beside the Brandywine Creek before there was a cart path. The round log house was constructed by either Jeremiah Collett, Jr. or Joseph Hickman. It is 1 1/2 stories, 21'9" x 25', with the narrow portion facing the street. Swedish and English in architectural style, it has undergone very little change for the past 279 years.

Georgian homes in the district are circa 1729, 1738, 1761, 1780's, and 1804. Except for the larger George Washington Inn, the homes are 3 to 5 bays wide of either fieldstone or local dressed quarried limestone. Devoid of all elaborate trim, the prominent features are the multi-paned double hung sash windows with paneled shutters on the first floor and louvered shutters on the 2nd floor. Federal architecture utilized frequently by the Webster family, a construction firm of the 1800's. The buildings are narrow rectangles or squares with either dressed limestone or stucco over stone facades and three to five bays wide. The windows have architrave trim lintels, wrought iron shutter holdbacks and are flanked by either paneled or louvered shutters. The offset left or right main doors are crowned with elliptical fan lights.

The elaborately rich decorative Gothic Revival and Queen Anne Styles had an additional dimension in the historic district. Only a few features of the styles were utilized in the interpretations instead of the usual five to 25 composition components. They are: multi-gabled roofs, encircling porches, or verandahs, eyelid dormers, tall thin chimneys, fish scale shingles, circular bays, variants of Palladian windows, and stained glass windows.

Bungalow architectural style buildings filled the few remaining empty lots at the beginning of the 20th century. Up until this period, the Quaker influence was very strong in the town's appearance. However, by 1900 other groups began to locate in Downingtown en mass and did not belong to the Quakers. Therefore, their homes in the district have almost all features of the style without any conservatism and they become the only purist architectural interpretation.

Recently an analogy was concluded on the Georgian and Federal structures in relation to the early local limestone quarries. The Downing family owned stone quarry lots in the northeast quadrant of the village. A few years ago the Corps of Engineers did a core sample analysis near the present lakes region which were the quarries of 1730-1840. It gave the depth plus the color of the limestone for each strata. Shades of tan, light gray and medium gray from the historic structures limestone facades were matched to their counterpart on the depth chart analysis. The conclusion was a chronological dating of the buildings that coincided completely with other research and legal documentation which had already been performed. Examples were: Thomas Moore Home, circa 1729, light and medium tan mixed with traces of grey limestone which is the first strata; the George Washington Inn, circa 1761, light to medium grey limestone with traces of tan; The William Todd House, circa 1800, medium gray limestone with no traces of tan; The Webster Houses, circa 1830's, medium grey limestone with tinges of blue.

The four historical intrusions of a drug store, two working gas stations and one closed gas station do not cloud one's perspective of a main street in small town U.S.A. fifty or 100 years ago. It still exists today in the East Lancaster Avenue Historic District.

The historical significance of East Lancaster Avenue, through past efforts in architecture, commerce, religion, and transportation, continues to be preserved in the latter 20th century. The natural environment of lush forests, fertile soil, gentle terrain, and a stream encouraged early European settlement and westward expansion beyond Philadelphia. This section of the hamlet was developed because it was the halfway point on the main thoroughfare between Lancaster, the oldest inland town in the early Province, and Philadelphia. It also was the starting point for many westward movements; was the center of the county geographically; had major stagecoach stops, and laid the foundation for the Philadelphia and Lancaster Turnpike in the 1790's.

The first commercial section grew around the bustling events at the George Washington Inn. Hunt Downing was not only the proprietor of the inn, but also part owner of the stagecoach line. Since the area was the half-way point between Philadelphia and Lancaster additional accommodations were required for the travelers, i.e. cigar, variety, saddlery and shoe repair shops. When the stagecoach lines died, the supporting enterprises moved to the 100 and 200 blocks of the district to be nearer the major road system, known as the 5 points intersection, on which travelers from the surrounding townships passed through the borough. And also to be close to the newer mode of transportation – railroads. The closed store fronts saw new life as residences during the post Civil War period with little facade adaptations.

In the 1700's the majority of the citizens were members in the Society of Friends, more commonly known as Quakers. Their very strong conservative religious beliefs influenced a slower, more leisurely pace of daily life. The influx of the Episcopalians, Presbyterians and Methodists in the 1800's maintained the conservative character in the district. The benefits of deliberated conservative changes on facades have tremendously aided the preservation of the district. The leaders refused to become the county seat in the 18th century because they wanted to maintain the town's tranquil setting. However, they did accept the responsibility of the county's post office in 1796.

Each new architectural style was executed in the vicinity 20 to 40 years after introduction and adoption by communities on the eastern seaboard. But, the townspeople never accepted the newer architectural ideas intact until the 20th century. Only a few components of each style were interpreted in the total structure composition. Frequently, styles were intermixed which present, to the naked eye today an unhurried, blended, and pleasing man-made cultural environment. Facades of residences were never modernized as each style was constructed in Downingtown. First floor store fronts have received 20th century treatment; however, the 2nd and 3rd floor exteriors have remained intact from the time of construction.

Discovery of limestone beds nearby gave additional impetus for village development. The thrifty citizenry utilized the local natural resources of limestone in construction of Georgian and Federal architectural styles for 110 years, (1730-1840). Consequently, community thriftiness, not uncommon in rural villages, coupled with their conservatism can be experienced by a total stranger on a walking tour of the district.