Photo: John and Alice Fullam Residence, designed by noted architect Paul Rudolph, the home on Brownsburg Road was built circa 1958 and listed on the National Register of Historic Places in March, 2019. Photograph by Username: Wokthedog, 2019, via wikimedia commons [cc-by 4.0], accessed September, 2019. 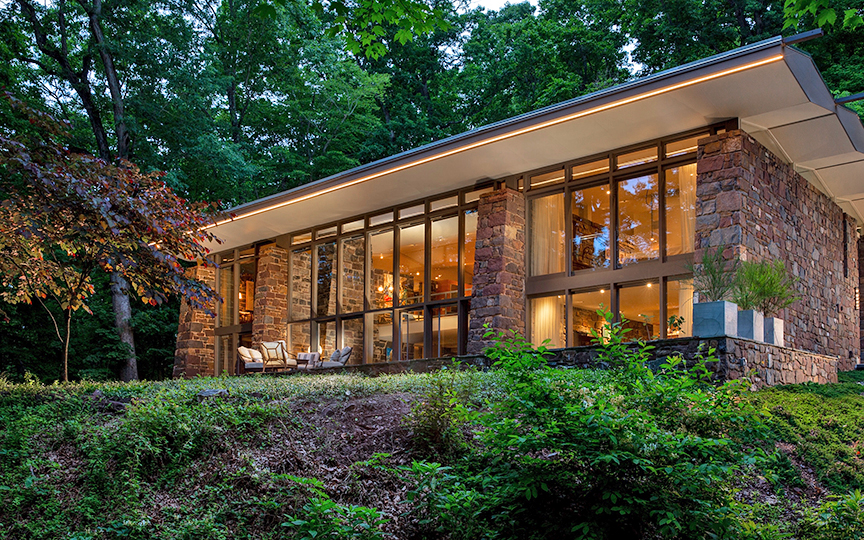 Wrightstown is the most sparsely settled of the municipalities in the lower half of Bucks County. Perhaps this situation was unwittingly prophesized more than 300 years ago. Consider the following, discovered in History of Bucks County Pennsylvania, William W. H. Davis, Lewis Publishing, 1905.

"Some light is thrown on the origin of the name "Wrightstown" by which it was called soon after it was settled, by the following extract from a letter of Phineas Pemberton to William Penn, in England, dated November 27, 1687."

'The land I have in Wrightstown is twelve hundred ackers, and only one settlement upon it. I lately offered to have given 100 ackers if he would have seated there and he has since bought at a very great price rather than go so far into the woods. There is about 500 ackers yet to take up in the towne. The people hereabout are much disappointed with Wright and his cheating tricks he played here. They think much to call it after such a rungadoe's name. He has not been in these parts for several years therefore I desire thee to give it a name. I have sometimes called it Centertown, because it lyes near the center of the county, as it may be supposed and the towne is layed out with a center in the middle of 600 ackers or thereabouts.'

One smiles imagining poor Phineas, not so different from contemporary developers who lobby to have their subdivisions included inside postal boundaries bearing the name of areas perceived to be better-class, better-known. (One that comes readily to mind is Princeton, New Jersey. You can purchase and live in a home with a Princeton address, yet remain 'quite a distance' from being in "Princeton.") Phineas was undoubtedly frustrated at not being able to sell-off property, hoping the Proprietor would officially dub the area "Centertown" and likely assumed no doubt that the subliminal effect would loosen peoples' perception of its "remote" location, as he notes – "so far into the woods."