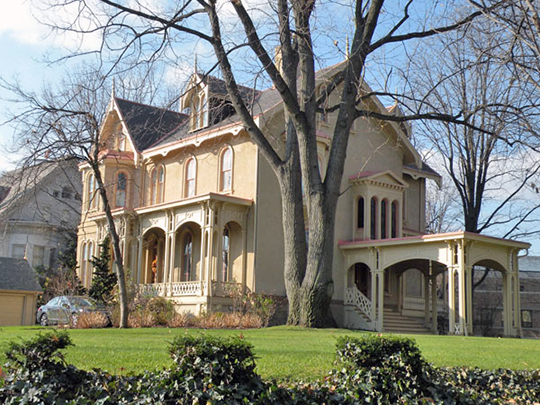 The Sellers House (Calvary Church Rectory; 400 Shady Ave.) was listed on the National Register of Historic Places in 1979. Portions of the content on this web page were adapted from a copy of the original nomination document. [1]

The Sellers House (also called Calvary Church Rectory) is located in the Shadyside neighborhood of Pittsburgh. It is a large 12 room house with 2 full stories, a dormered attic and basement. Stylistically, the house is a mixture of the Italian Villa and Medievalistic types mixed with elements of the developing Italianate and Second Empire styles. A highly eclectic structure, it is related to the Singer and Henderson houses, both in Pittsburgh. It is constructed of red brick painted polychromatically with a cut stone basement also painted.

The plan of the house is a modified cross form with intersecting gabled roofs. There are two large gabled dormers on the southwest facade. The house also has 3 decorative brick chimneys.

Almost all of the original wood and stone detailing of the house has been preserved. The house is one of the few homes of its type to remain intact within the City of Pittsburgh.

Each of the brick chimneys is formed with a round arched inset on each side with a pair of smaller round arched insets at the center of the larger inset. The motif is used in the glazing bars of the windows. This type of window is to be found through out the Italian Renaissance Revival of the 19th and 20th centuries. The top of each chimney is further modeled with a granite coping with carved granite finish rising above the chimney proper at each corner.

The gabled ends of the house and eave lines are adorned with carved wooden barge boards in a flat arch motif. Small carved wooden pinnacles rising above the ridge pole of each gable from the apex of the barge boards could be easily reconstructed from existing photographs. (The pinnacles have been partially removed.) These elements are particularly medievalistic.

The porte cochere, approximately 16' x 24' is constructed of wood with fine carved details. The flat roof is supported by double columns at each corner with carved flat arched inserts spanning between them.

The southwest and northeast facades each have wooden verandas with flat cut-out balustrades of intricate design. The columns and spanning inserts match those of the porte cochere. All of the windows in the house are found arched with carved wood hood moldings, and scroll supporting bracket.

The Sellers House, built in 1858, is significant for its historic associations with the growth and development of the City of Pittsburgh. It is one of the first mansions built in the area now called Shadyside and with its original parcel of land constituted one of the large holdings of the area.

Shadyside was a rural area in the mid 19th century with Pittsburgh some 7 miles away. Wealthy families sought to escape the constant danger of fires (a major portion of Pittsburgh had burned in 1845), as well as recurring cholera epidemics, flooding, and persistent soot and smoke. A number of the wealthy built large houses in the area that now comprises Shadyside and East Liberty. This area continued to grow when the Pennsylvania Railroad East Liberty Passenger Railway was opened in 1860.

The land on which the house sits was once a plot of 10 acres which is now bounded by Walnut Street, Fifth Avenue, Shady Avenue and Stratton St.

Early records show that the land, then in Peebles Township, was sold to Daniel Negley acting on behalf of his wards, the children of George Wallace, to James Lippencott on March 24, 1856. In June of 1857 Lippencott sold the land to Priscilla Sellers for $8,796 with the stipulation that she also pay Lippencott's two remaining payments owned to Negley ($3,315). Priscilla and Francis Sellers built the house in 1858. Pittsburgh was a growing city as was Shadyside and environs. Peebles Township was annexed to the City on April 6, 1867. By 1874 the Sellers had decided to sub-divide the land and had sold three parcels on Shady Avenue between 1875 and 1877.

In the next year the land and the house were resold by Sheriff H. R. Fife to two local banks.

From the deed description of 1879 it is apparent that the Sellers family had been affluent. In addition to building "a large 12 room, 3 story brick house" they had also built a 2 story frame tenant house, and several sheds. All of these have been lost with the exception of the stable and carriage house (now 6220 Sellers Way) which has been converted into a house and is presently occupied.

The house was purchased with its present smaller lot in 1881, and changed hands once more in 1888 when it was sold to Jay W. Carnahan for $30,000. The remaining land was sub-divided and sold as lots.

The house remained the home of the Carnahan family until 1947 when it was donated to the Calvary Episcopal Church by the last member of the family. It has been used by the church as a school and then as a meeting place for their ladies' society. It is presently used as a rectory for the church. Only one major renovation has taken place, when 4 additional baths were added and the kitchen moved from the basement to the original dining room on the first floor. The exterior of the house remains virtually intact. The house is one of the two remaining examples of large Shadyside mansions built during this period of Pittsburgh's growth.

Pittsburgh in its early years aptly deserved its reputation as the Smoky City. Its many steel mills and polluting industries while supporting a growing immigrant workforce, a stable economy and a robber-baron class of great magnitude was not a very pleasant place to live.

The Caborer and middle class people had little opportunity to escape the smoke and soot. However, the rich bosses, foremen and owners escaped or tried to escape this foul environment by building villas and large estates in the then rural countryside surrounding Pittsburgh. This concept of the country estate was all part of social setting of nineteenth century Pittsburgh. The Seller's House is one of these early country estates which was later swallowed up by the expanding city in the late 1800's and early 1900's.