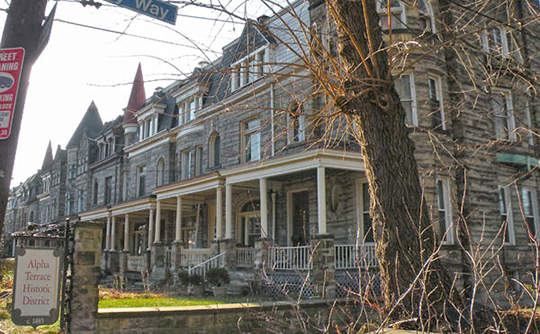 The Alpha Terrace Historic District (716‑740 and 721‑ 743 N. Beatty St.) was listed on the National Register of Historic Places in 1985. Portions of the content on this web page were adapted from a copy of the original nomination document. [1]

The Alpha Terrace Historic District consists of twenty-five brick rowhouses with stone facades arranged on either side of North Beatty Street in two facing rows. There are thirteen two-story Queen Anne houses on the east side (#716-740), and twelve three-story houses of combined Richardsonian Romanesque and Queen Anne derivation on the west side (#721-743). The two rows, although highly irregular in design, combine to form a unified whole rich in form and detail.

The two house rows that comprise Alpha Terrace are built on deep narrow lots. They are sited on slight rises and set back from the street behind small front yards. The east side units are raised higher above the street, and are fronted by flights of steps and occasional stone retaining walls. There are also stone walls marking the limits of Alpha Terrace at the four end properties. Alleys access the houses from the rear. There are no intrusions in the district; all properties are equally significant to the district.

On the earlier east side, most of the units are arranged in mirror-image pairs so that alternating units are of the same design. The typical unit is stone on the first story. It has an entry with a bracketed hood and an unusual six-part window. The window is divided by turned posts, which act as mullions, and the center section descends to floor level and issues onto a slab balcony carried on stone brackets and outfitted with pipe railings. The second story is clad with wood shingles. It features a small window with bracketed hood, and a projecting rectangular bay with two windows, topped by a gable. A denticular cornice crosses the facade and wraps around the projecting bay, and a short mansard roof surmounts the facade behind the gable. The entry hood brackets and the cove beneath the projecting bay have ornamental pendants, and the gable peak is enriched with jigsawn wood.

The central (#728) and end units (#716, #740) of this row, however, are stone on both stories, and have three-story projecting bays which rise in front of full-height mansard attic stories. The south-end unit's bay is frame and rectangular. But the central and north-end unit have rounded stone bays topped by cone roofs and finials. The third story of the central unit bay consists of curved windows divided by wood pilasters, while the corresponding story of the north-end unit bay is an openwork balcony. There is extensive use of stained glass in all units.

The typical east side row unit is four rooms deep on both floors. Two of these rooms are contained in stuccoed two-story frame additions at the rear. Only the central unit has a garage.

On the west side, all facades are stone on both lower stories, and the first story treatment of each unit is essentially identical. There is a porch with stone piers, wood balustrade, and thin wood columns. The tall narrow entry, with paneled double doors, is balanced by a three-part window with a broad arced or rectangular transom. Above the first story, however, there is great irregularity. Alternate units or portions of units project or recess, and wall surfaces form rectangular or bowed sections which bear no relation to the actual division of units. Twice, slender turrets with attenuated caps rise out of small recesses. Second story fenestration involves a wide variety of rectangular and arched window shapes. The full attic story is fronted by sections of mansard roof with paired or single hipped-roof dormers.

At the center of the row, units #731-733 have projecting rectangular stone bays gabled at the third story, flanking a rounded bay with cone roof. Rectangular windows are divided from transom-like windows above by a thin stone course. The units share a slightly hipped roof topped with cresting. The north-end unit of this row (#743) also has a rounded bay, and features pointed arch and ocular windows. This row makes extensive use of leaded glass.

The typical west side row unit is three rooms deep on the first two floors, and has two third floor rooms. Brick garages at the rear of the lots are each shared by two units. These were built early in the twentieth century.

Despite animated massing and detailing, and two different phases of construction, Alpha Terrace's two rows are formally related to each other. The center of each row is architecturally emphasized, and is marked with a stone reading ALPHA TERRACE. End units, particularly those at the northern end, are also emphasized. Overall, the rows have notable rhythmic and cohesive qualities.

Some units suffer from minor unsympathetic alterations (e.g. to porches, windows, doors) or lack of maintenance. #743 may have lost a cone roof. But the overall composition and exuberance of Alpha Terrace remains intact.

The Alpha Terrace Historic District is significant because of its unity of development and its architectural design qualities. Built as speculative housing in 1889 and 1894, the two complementary rows which comprise the district form Pittsburgh's best multi-unit example of flamboyant Victorian era row housing.

Alpha Terrace is built on land once owned by the prominent Winebiddle and Negley families. A Negley descendent, Isabel C. Sargent, inherited the land and it was sub-divided in 1885 as part of "S. J. Sargent's Plan." (The plan was named after her husband, but it states that Isabel Sargent "adopted" the plan of lots.) It is believed that Isabel Sargent began construction of the east side of Alpha Terrace in 1889. (Building permits are unavailable for this year.) The row was assuredly built by November 3, 1893 when Sargent obtained a permit to construct two-story frame additions at the rear of twelve of the east side units. On June 27, 1894 Sargent obtained a permit for construction of the west side row at an anticipated cost of $53,000. Both permits list Murphy and Hamilton as builders. It is likely that they also erected the original row, and may have provided the designs for Alpha Terrace in lieu of an architect. Murphy and Hamilton appear in city directories and on the occasional building permit, but had no particular prominence.

Alpha Terrace remained rental property under single ownership until the 1950s when the units were individually sold. Today Alpha Terrace has both owner-occupied and rental units.

Although built in two primary stages, Alpha Terrace is clearly the result of a single moving force. It is a planned development, architecturally unified and differentiated from its immediate neighbors. (An unconfirmed source suggests that Alpha Terrace was originally a private enclave, with low walls and gates controlling access at either end of the rows.) Its architectural forms are carefully balanced. Yet this unity provides a framework for the display of a wide range of Victorian architectural motifs.

The startling aspect of Alpha Terrace's design is the way in which varied three-dimensional forms are repeatedly employed in a rowhousing context. Each narrow facade, though clearly of superficial depth, assumes the guise of the free-standing picturesque Victorian house which typifies early development in the Highland Park district to the north. Built at the edge of this desirable turn-of-the-century residential area, Alpha Terrace exploited the economic advantages of rowhouse development, while sacrificing none of the favored picturesque qualities of its time and place. As a totality, Alpha Terrace is at once dense and urban; and spacious and suburban.

Dense rowhouse development characterizes Pittsburgh's early neighborhoods, crowded into the flat river plains. But rowhouse construction tended to be a piecemeal affair. Houses were generally constructed as infill in partially developed streetscapes. The long unified rows which characterize rowhouse development in Philadelphia and Baltimore are rare in Pittsburgh. When the open uplands of Pittsburgh's East End were developed in the late nineteenth and early twentieth centuries, large free-standing houses, rather than rowhouses, were the order of the day. Resembling most closely the numerous picturesque Victorian-era rows of Washington, D.C., Alpha Terrace is a unique product of Victorian-era Pittsburgh.