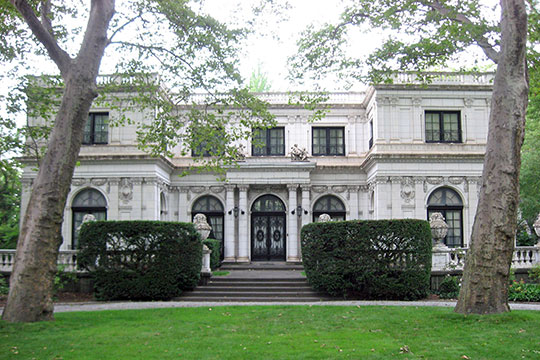 The Moreland-Hoffstot House (5057 5th Ave.) was listed on the National Register of Historic Places in 1978. Portions of the content on this web page were adapted from a copy of the original nomination document. [1]

The Moreland-Hoffstot House is built of regular coursed ashlar with a terra cotta and stucco veneer. The house is two stories high with a recessed three-bay central section and projecting one-bay wings at either end. It is symmetrical in plan and decoration.

The facade is highly ornate and "illustrates the Edwardian passion for ornamental terra cotta." The first floor contains full-story arched windows separated by engaged composite pilasters. On either side of the center hall entrance are coupled composite columns which support a protruding, one-bay entablature above which rests statuary figurines. Festoons, heraldries, consoles, and modillions further ornament the facade. The composite pilasters support a projecting cornice. The second floor is marked by flat-arched windows and moulded composite columns. Patio statuary and iron window crating complete the ornamentation.

The basic house form is that of the Grande Trianon at Versailles.

The main portion of the house facing Fifth Avenue is approximately 70 feet by 70 feet entirely sheathed on the front and sides in white glazed terra cotta. It has a U-shape plan with a large front terrace set deeply into the front facade. Off the terrace on the first floor the entire center section of the house is a large foyer (approximately 40' x 25'). The main staircase divides at a landing into two stairs that turn back 180 degrees, a conservatory stands at the rear of the foyer and behind the stairs and the principal rooms open onto the sides of the foyer. There is a large side entry on the east side of the foyer. On the second floor the principal bedrooms occupy the eastern and western wings, while the upper stair hall and one bedroom occupy the space above the foyer. A three story service wing, approximately 30' by 40' and faced simply with white stucco, stands at the rear west corner of the house.

The interior decoration of the house is in the same French Renaissance style so evident in the exterior composition and ornamentation.

The Moreland-Hoffstot House is a fine example of early 20th century Victorian architecture. The basic form of the house, the Grande Trianon at Versailles, had been used by McKim, Mead, and White in "Rosecliff" at Newport, Rhode Island. Pittsburgh's Trianon is a provincial model of the Newport house.

The owners of this house were important in the iron and steel industry in the early 1900's. Andrew Moreland held various positions including president of the G. T. & T. Company, treasurer of Iron Trade Products Company, and officer of A. M. Moreland & Company. He built this house at 5057 Fifth Avenue and lived there from 1916 through 1926. Andrew Moreland married a member of the New York, Oelrichs family who had built "Rosecliff" at Newport, Rhode Island, designed by McKim, Mead, and White. This Pittsburgh house is obviously in the same tradition as "Rosecliff."

Henry Phipps Hoffstot was born in Allegheny in 1886. He was vice-president in charge of operations of the Pressed Steel Car Company from 1918 to 1933 and president of its subsidiary, the Koppel Industrial Car and Equipment Company from 1918 to 1936. He had sizable land holdings in Manatee County, Florida, was president and major shareholder of the Pennsgrove (New Jersey) Water Supply Company, vice-president of the National Bank of America, Pittsburgh, and a director of Colonial Utilities Corporation.

He married Marguerite Martin of Buffalo, New York, in 1912 and purchased this house in 1929, living there until his death in 1967.

The house was then owned by his son, Henry, who carefully and extensively restored it.