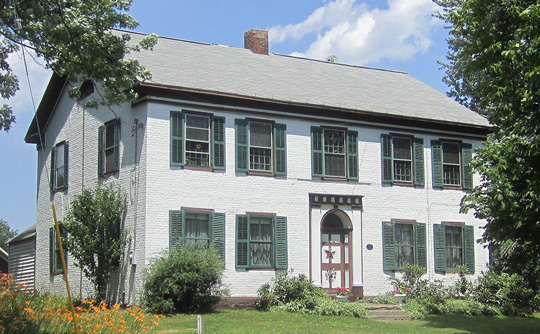 The Nathan Garnsey House was listed on the National Register of Historic Places in 2012. Portions of the content of this web page were adapted from a copy of the original nomination document. [‡]

The Nathan Garnsey House is located on the north side of Route 146, east of Rexford in the Town of Clifton Park, situated on a 22-plus acre plot of land that straddles both sides of the road. The house is a substantial 2-1/2 story brick structure, 5 bays wide, with a side gable roof and the long axis fronting Route 146. The brick is laid in American common bond, the house rests on a cut limestone block foundation, and the roof is covered in asphalt shingles. A center chimney marks the New England roots of the Garnsey family, and a marble table on the chimney notes a construction date of 1791; a second inscription on a brick at the rear of the house bears the name Jehiel Robbins and a start-date of construction as 1789. Two rear additions enlarge the overall massing, an unobtrusive 2-story addition put on in 1990 and a small (single room) summer kitchen ell added at an unknown date. The brick is currently painted white, and the current owners possess an historic photograph which shows this treatment was done in 1895. The painting covers up a particularly well-executed diaper pattern in the brickwork. In interior arrangement, the Garnsey House is a center entrance, double-pile plan, with 2 rooms to either side of a winding box stair. The rooms share a single center chimney with 2 rooms in front and a long kitchen and small chamber occupying the rear half of the first floor.

The Nathan Garnsey House is a rare surviving example of a late 18th century farmhouse in the Town of Clifton Park. Built in the center-chimney New England mode by immigrants from Connecticut, the Garnsey House has been occupied by members of the Garnsey family since its construction in 1791. The house represents the convergence or adaptation of popular, national and somewhat more-academic modes with regional vernacular traditions and displays many of the characteristics and finishes of the then-emerging Federal style. The Garnseys were among the first families to settle in what became Clifton Park. The house is historically significant for its association with the early history of the town.

Nathan Garnsey was born in Waterbury, CT and was living in Litchfield, CT when he got married in 1763. He moved to Amenia, Dutchess County, NY in 1779 and bought the land in Clifton Park from his brother John in 1783.

The brickwork of the Garnsey House uses a distinctive pattern of vertical zigzags which repeat every ten courses vertically, and is unusual because it is produced by rows of stretchers rather than headers. The house is one of a handful of examples of its style and period in Vermont and New York that exhibit a similar patterned brick bonding. Although these houses differ in terms of form and style, the unique brickwork suggests a connection, and one can speculate they were either all constructed by a single builder, a small number of builders, or (at the very least) influenced by one another. The most obvious connection to the Garnsey House is the Payne House in Fort Mill, Washington County, NY. The Payne House exhibits the exact same diapering pattern, but more importantly, also has a brick signed by Jehiel Robbins. The Payne House was built in 1786 and is about 30 miles from the Garnsey House by modern roads. Research indicates Noah Payne and Jehiel Robbins had a connection — both men appear in the list of original proprietors of the town of Orange, Vermont, though the Robbins family genealogical sources note that Jehiel never lived in the town. It is interesting that the Payne House dates to five years before the Garnsey House, but the former exhibits a symmetrical center hall Georgian plan while the latter is an earlier, center-chimney form. Payne, Garnsey and Robbins were all New Englanders and brought those modes and building traditions into New York after the Revolution. In any case, the Garnsey House represents a tradition of finely-crafted brickwork and vernacular interpretations of high-style building trends.