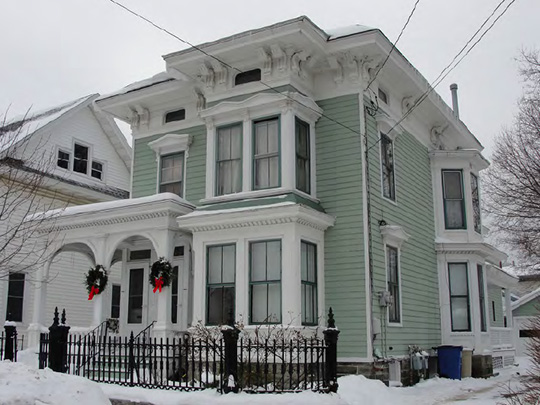 The Kingsford Historic District was listed on the National Register of Historic Places in 2013. Portions of the content of this web page were adapted from a copy of the original nomination document. [‡]

The Kingsford Historic District developed during the second half of the nineteenth century and reflects the City of Oswego's growth during this period, when it became a thriving commercial and industrial center. Much of Oswego's architectural fabric dates to the second half of the nineteenth century and early years of the twentieth century, but few areas in the city have retained as high a level of historic appearance and visual integrity as this district. The district is named for the Kingsford family. Thomas Kingsford was the founder of the Oswego Starch Factory, which grew to become the largest starch factory in the world and was a major driver of industrial development in Oswego in the nineteenth century. The Kingsford family was the largest employers in 19th century Oswego. Thomas Kingsford's son, Thomson, granddaughter, Virginia Kingsford Higgins, and grandson, Thomas P. Kingsford, all had homes in the district that remain extant. The four generations of the Kingsford family resided in the district for more than 100 years. Six properties in the district have direct connections to the family. The district also contains the homes of many members of Oswego's burgeoning middle- and upper-middle class, including attorneys, industrialists, physicians and owners of commercial enterprises. The great majority of the buildings in the district were constructed in the Italianate style, and the district provides many intact and well-preserved examples of fashionable domestic architecture from the late 19th century.

The Kingsford Historic district is significant for its association with the Kingsford family, locally prominent industrialists. Thomas Kingsford and his son, Thomson, emigrated from England and settled in New Jersey in the 1840s. By 1846 they had perfected a new process for deriving starch from corn and in 1848 they relocated to Oswego and established the Oswego Starch Factory. Thomas Kingsford's home (no longer extant) was located just outside the Kingsford Historic District, on West 1st Street between West Mohawk and West Utica, an area of large homes dating to the 1830s. Thomson Kingsford purchased an existing home at West Third and West Oneida Streets in 1856. This home, originally Italianate, but remodeled into the Tudor Revival style by Thomson's son, Thomas P. Kingsford, in 1910-11, is individually listed on the National Register of Historic Places. Thomson Kingsford's half-sister, Ann Thomson Wilbur, lived next door to her brother at 162 West Third Street. This home, an Italianate residence dating to the 1860s, is still extant and is one of the many Italianate homes in the Kingsford Historic District that date to this period. Thomson Kingsford's daughter, Virginia Kingsford Higgins, and her husband John Higgins, built the high-style Georgian Revival home adjacent to her father's home, at 40 West Oneida Street in the district.

The Kingsfords selected Oswego as the location for their new starch factory both because of its location on the Oswego River, which provided ample water power to operate the plant, and the ease of transporting materials to and from the city by water and by rail. The Oswego Canal had been completed in 1828, connecting Oswego to the Erie Canal at Syracuse. Between the late 1840s and the early 1870s, Oswego became a hub for four major railroads, providing extensive overland connections in addition to the earlier water routes. The Oswego Starch Factory eventually grew to occupy several city blocks on the west side of the Oswego River and became the largest such operation in the world, producing more corn starch than any other plant for the remainder of the nineteenth century and becoming the largest employer in Oswego. Thomas Kingsford died in 1869 and his son, Thomson, assumed full control of the business until passing the torch to his son, Thomas P. Kingsford, in 1900. By the end of the nineteenth century, the Kingsford empire had grown to include not only the starch factory, but a department store, foundry, box factory, farm, and a fire company. A secondary enterprise was the Kingsford Foundry and Machine Works, another important enterprise.

The development of the Oswego Starch Factory and other Kingsford enterprises contributed significantly to the rapid growth of the City of Oswego in the second half of the 19th century. Much of the city's architectural fabric dates to this period, reflecting the major population expansion that occurred in response to increasing economic activity and employment opportunities. The starch factory employed hundreds of workers, whose wages supported scores of local commercial enterprises. When the factory closed in 1923, 900 people were put out of work.

In addition to the Kingsford family homes that are located in the District, other buildings in the district have Kingsford connections. Thomas Kingsford was an early supporter and the first trustee and treasurer of the West Baptist Church, constructed in 1867. The Kingsford family financed half the cost of its construction. The Kingsford family owned the Italianate home at 143 West Third Street from 1881 until 1927, during which time it was managed as a rental property and from 1905-1920, it was the residence of the pastor of West Baptist Church. More than one home in the district was occupied by an employee of the various Kingsford commercial and industrial enterprises. Even the residences in the district that have no direct Kingsford connection may be said to have been built, at least in part, because of the rapid development of the middle- and upper-middle class in the city that resulted from the burst in economic activity ignited by the establishment and expansion of such industrial enterprises as the starch factory. It was also a desirable area to live because of the proximity to churches, schools, businesses and middle upper-class to upper-class housing.

The Kingsford Historic District is a visually intact collection of residential (and two religious) structures from the second half of the 19th century and first decade of the 20th century, the period of Oswego's most rapid expansion.

The earliest buildings in the district are the Greek Revival structures, including those located at 24 West Oneida Street, 200 West Second Street, 143 West 3rd Street, 156 West Fourth Street, 174 West 3rd Street and154 West Fifth which pre-date the district's period of significance. Two of these (143 and 174 West 3rd Street) were remodeled later in the nineteenth century and are now classified as Italianate structures. Beginning in 1856 with the construction of the O.H Brown house at 188 W. 2nd Street and continuing on through the decade of the 1860s, the district became a major nexus of development in the Italianate style. The variety of Italianate homes in the district ranges from the rather modest, wood frame, two-bay residence at 170 West Fourth Street (original owner unknown), to the high-style brick residence of Leonard Ames, President of the Second National Bank and owner of the Ames Iron Works, at 150 West Fourth Street.

Many contributing properties in the district were constructed in, or remodeled into, the Italianate style, a style that was popular in the United States between 1840 and 1885, and which dominated American domestic architecture during the period 1850-1880. The principle characteristics of the style are a height of two or three stories; low-pitched roofs with widely overhanging eaves; decorative brackets beneath the eaves; tall, narrow windows, often with arched tops and frequently having elaborated caps; and a square cupola. Nearly all of the Italianate houses in the district display all of these characteristics, the exception being cupolas, which appear on only two (188 West 2nd Street and 160 West Fourth Street).

Promoted by the pattern books of Andrew Jackson Downing in the 1840s and 1850s, the Italianate style completely overtook in popularity other styles of the period, such as Gothic Revival and Second Empire, by the 1860s. Many earlier buildings, often in the Greek Revival style, were remodeled in the more fashionable Italianate style by newly well-off owners, beneficiaries of the surge in economic activity and development in the United States during the 1850-1870 period. This is true of at least two homes in the Kingsford Historic District (143 and 174 West 3rd Street). New construction slowed in America following the financial panic of 1873, and when construction revived in the 1880s, new styles, such as the Queen Anne, supplanted the older Italianate. The Italianate buildings in the Kingsford Historic District were constructed between 1856 and 1886, with most dating to the decade of the 1860s, squarely centered in the style's most popular period.

In addition to the Italianate, the district contains examples of the Queen Anne and Colonial Revival styles, both of which became popular as the domestic economy began to revive after the recession that followed the financial panic of 1873.

The Queen Anne style was the dominant style in American domestic architecture in the period from 1880-1900, with some examples occurring into the first decade of the twentieth century. Characteristics of the Queen Anne include steeply pitched roofs of irregular shape; patterned shingles, cut-away bay windows and other devices to enliven the wall surface; and an asymmetrical facade with a partial or full-width porch, often wrapping around to a side elevation. Popularized by English architect Richard Norman Shaw, the first Queen Anne style residence in the United States was constructed in 1874. By the 1880s, the style had begun to diverge from Shaw's original approach and had become characterized by the elaborate spindle work and exterior decoration that typifies the style in America. Examples of the Queen Anne style in the district include the homes at 59 and 61 West Mohawk Street, 30 West Oneida Street, and 157 and 164 West Third Street, and 144 West Fourth. All were constructed between 1888 and 1910, toward the end of the district's period of significance and of the style's popularity.

A non-domestic structure in the Kingsford Historic District is the Romanesque Revival West Baptist Church, constructed in 1867. The Romanesque Revival style was popular in the United States in the period between 1840 and 1900. Characteristics of the style include semi-circular arch window and door openings; corbels, string courses and belt courses; square or polygonal towers of differing heights; and varied roof shapes. Churches were the most frequent building type for the style. Buildings in the Romanesque Revival style are generally constructed of brick or stone. The West Baptist Church is an outstanding example of the style, featuring all of its primary stylistic elements. The former St. Matthew's Lutheran Church at 22 West Mohawk is the other example built about a decade later in the newer version Richardsonian Romanesque architecture.

By the end of the first decade of the twentieth century, the Kingsford Historic District was fully developed. Shortly thereafter, in 1923, the Kingsford Starch Factory closed, relocating its facilities further west to be closer to the raw materials being produced in America's burgeoning heartland. Industry in Oswego declined abruptly in the early years of the twentieth century, as the Canadian lumber trade diminished, brewing declined as a result of a tariff on barley, and flour milling ceased as mills in the Midwest expanded to dominate that industry. Today, the Kingsford Historic District remains as a largely intact example and reminder of the economic heights attained by Oswego during its years as a major industrial center in the late nineteenth century.