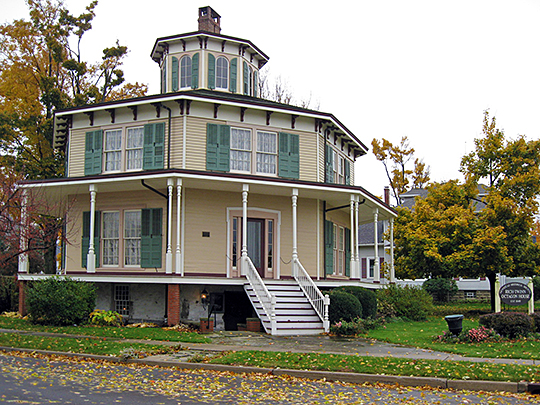 The Rich-Twinn Octagon House (145 Main Street) was listed on the National Register of Historic Places in 1995. Portions of the content on this web page were adapted from a copy of the original nomination document. [1] As of 9/2008 the house is operated as a museum by the Newstead Historical Society.

The Rich-Twinn Octagon House (1849), a two-story frame dwelling designed in the Octagon mode, is located at the southeast corner of Main Street and Parkview Drive in a quiet residential neighborhood several blocks east of Akron's central business district. Akron is located approximately 12 miles northeast of Buffalo, once an isolated yet prosperous industrial village in rural Erie County renowned for its production of natural cement. Akron is now primarily a bedroom community for nearby Buffalo. The house is sited on a spacious gently sloping corner lot landscaped with grass and mature trees and shrubbery. The surrounding neighborhood consists of smaller, more modestly detailed late nineteenth and early twentieth century dwellings.

The house, meticulously restored according to the Secretary of the Interior's Standards for Rehabilitation, is a two-story, eight-sided frame dwelling resting on a raised, parged fieldstone foundation. The heavy timber frame is sheathed with flushboard siding on the first story and clapboard siding on the second story and is surmounted by a low-pitched, cedar shake clad, hipped roof encircled by a bracketed cornice. An imposing octagonal, copper roofed cupola with round-arched windows, a brick chimney and a bracketed cornice crowns the building. A one-story verandah supported by slender turned posts encircles the entire building. Fenestration throughout the building is symmetrical; each of the eight sides contain a pair of double-hung sash windows. The main entrance is centrally placed on the first story of the southwest facet of the octagon.

Typical of the Octagon mode, few interior rooms are rectilinear. The small, irregularly shaped front hall features a curved staircase with a handsome turned balustrade and heavy newel post. The public rooms on the first story (i.e., the drawing and dining rooms) are relatively large, pentagonal rooms with elegant marble fireplaces and plaster cove molding. The first floor also includes a small, square parlor and triangular sewing and library rooms. The second floor features a spacious, irregularly shaped front hall, three small, roughly triangular bedrooms, two slightly larger, also asymmetrical (but four-sided) bedrooms and one large, almost square bedrooms. A steep staircase provides access to the cupola, much of which is occupied by a massive, brick chimney. The basement contains the kitchen and a variety of small and irregularly shaped service rooms.

Severely neglected during the third quarter of the twentieth century, the dilapidated house was acquired by the Newstead Historical Society in 1981. Extensive historical photo documentation and related records as well as numerous extant fragments of a variety of the building's original features enabled the Society to faithfully restore the dwelling to its original grandeur. In summary, the following original components were virtually intact in 1981 and needed little, if any, renovation: the room configurations, most of the heavy timber framing, the flush-board siding on the exterior of the first story, the entablature and bracketed cornice above the second story, most door and window trim and all marble fireplaces on the interior of the first story and all three interior staircases (from the basement to the first story, from the first story to the second story and from the second story to the cupola). The stones comprising the foundation are original, but were mostly repointed (and reparged). All other elements of the building were meticulously restored, replaced or recreated according to the Secretary of the Interior's Standards for Rehabilitation: the clapboard siding on the second story, all exterior windows and window trim, all components of the exterior stairs and verandah, the cedar shake roof, everything but the framing and the bracketed cornice of the cupola, the plaster cornices and wooden baseboards on the interior of the first story and all interior woodwork on the second story. Most of the restoration of the exterior (with the exception of the shutters) has been completed; the renovations of the interiors of both the basement and first story are also virtually completed; the restoration of the second-story interior is in progress. The building serves as a house museum run by the Newstead Historical Society and is open to the public on a regular basis.

There are no outbuildings located on the property.

The Rich-Twinn Octagon House, built in 1849, is architecturally significant as a rare and extremely early surviving example of the Octagon style in Western New York. It is the only example of its type in Erie County; the Octagon, popularized by Orson S. Fowler during the mid-nineteenth century, is more commonly found in the Hudson Valley, Mohawk Valley and Central regions of the state. Recently restored by the Newstead Historical Society and operated as a house museum, the house is one of the most distinguished examples of nineteenth century, residential architecture in Akron. The dwelling was built by Charles B. Rich, one of Akron's foremost nineteenth century citizens.

The house embodies many of the innovative architectural concepts promulgated by Fowler in 1848 with the first publication of The Octagon House: A Home For All. Fowler promoted the eight-sided building type, with its economy of materials, functional interior divisions, superior ventilation and ample fenestration, as the perfect house for the progressive, working-class family. The Octagon style was particularly popular in New York State (particularly in the Hudson and Mohawk Valleys and the Central Region of the state); Fowler's own magnificent Octagon in Fishkill (Dutchess County) overlooking the Hudson River became the inspiration for many other, albeit more modest, renditions of the type.

Fowler's Octagon in Fishkill is reputed to have been the direct inspiration of Charles B. Rich's Octagon. Rich, a locally prominent citizen of Akron, was a New York Indian agent and grain merchant. Late in the 1840s he married for the fourth time and with his bride took a packet boat trip on the Erie Canal to New York City; the Rich's were said to have admired an Octagon (presumably Fowler's) in the Hudson Valley and, upon their return to Akron, proceeded to erect a similar type of residence. Completed in 1849, the Rich's Octagon is a remarkably early example of the trend; most Octagons in New York State date from the 1850s. Characteristic of many houses built during the late 1840s, the Rich house displays a variety of features associated with the Greek Revival style, which was popular at mid-century in Western New York. The house is particularly noteworthy for its extremely early employment of a variety of Italianate style elements; the Italianate style did not become widespread in Western New York until the 1860s, making the Rich house a remarkably early example of the type and period.

Rich occupied the house until 1870 when it was purchased by Charles A. Clark, the superintendent of the Akron Cement Works. Uriah Cummings, another cement manufacturer, rented the house from 1879 to 1882. After 1882 the house was owned by William Jillings. After Jillings' death, his widow lived there until 1938 at which time it was purchased by Clark J. Twinn, a relative of the second owner (Charles A. Clark). Mr. Twinn served at one time as assistant United States Attorney for the territory of Alaska. Twinn's widow occupied the house after his death; it was acquired by the Newstead Historical Society in 1981 and meticulously restored according to the Secretary of the Interior's Standards for Rehabilitation. The house is listed under its current, popular name, the Rich-Twinn Octagon House, rather than its historic name, the Charles B. Rich House.